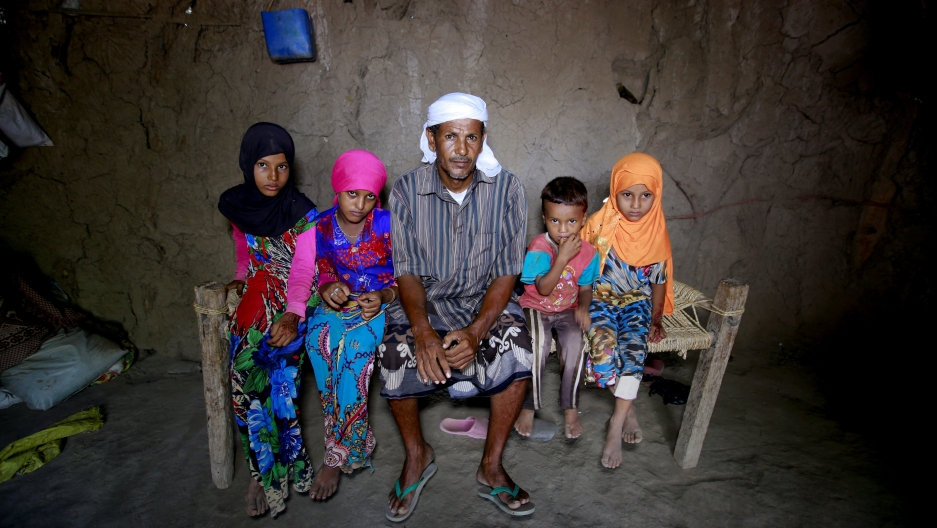 Saida Ahmed Baghili, second from left, 19, who is recovering from severe malnutrition, poses for a photograph with her father and her sisters Jalila, left, 12, and Amal, right, 7, and 4-year-old brother Omar at their hut in al-Tuhaita district of Hodeidah, Yemen, Oct. 20, 2017.

Concluding a five-day mission, his first to Yemen, the UN head of humanitarian affairs and emergency relief said the war in the impoverished Arab nation should end through a political process.

"I came to Yemen to better understand the deteriorating humanitarian crisis, including the fastest-growing cholera epidemic the world has ever seen, the world's largest food insecurity and conditions of widespread population displacement," Lowcock said.

"It's been shocking to see the terrible impact of this man-made conflict," he told reporters before leaving Sanaa.

"The UN calls on all parties ... to uphold the highest standards of international humanitarian law and respect human rights with respect to everyone including detainees and journalists," he added.

Lowcock is scheduled to speak at a one-day high level meeting on the humanitarian response to the Yemen crisis in Riyadh on Sunday.

During his visit, Lowcock held talks in Aden, where the internationally recognised government is based, and in rebel-held Sanaa, as well as visiting several other areas.

He said he urged officials in Aden and Sanaa to ensure that humanitarian assistance reaches all those who need it, and called for reopening Sanaa airport for commercial and humanitarian flights.

Lowcock said he saw severely malnourished children, visited hospitals with barely any electricity and water and met health workers who have not been paid for months.

The United Nations is providing direct assistance to seven million Yemenis, but the program needs to do more and it requires more support, he said.

Since 2014, a rebel alliance of Iran-backed Houthi militias and forces loyal to former president Ali Abdullah Saleh have fought the government of President Abedrabbo Mansour Hadi for control of the impoverished country.

A Saudi-led military coalition intervened in Yemen in support of the Hadi government in March 2015.

The UN has described Yemen as the world's number one humanitarian crisis.

More than 8,650 people have been killed in the conflict and around 58,600 others have been wounded, many of them civilians.