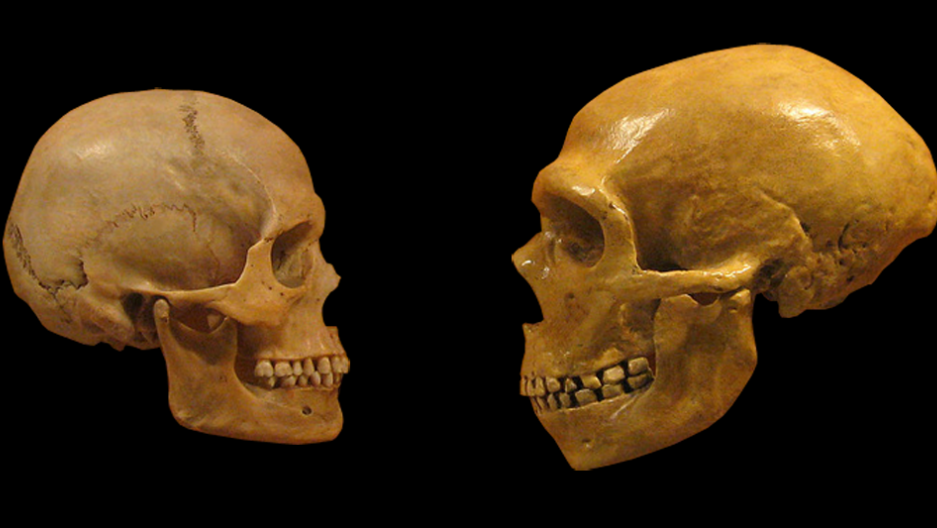 A modern human skull (left) and a Neanderthal skull (right) at the Cleveland Museum of Natural History.

Up to about 100,000 years ago, our human ancestors coexisted with Neanderthals in Europe and interbred with them for thousands of years. The Neanderthals eventually went extinct, but many of us still carry around fragments of Neanderthal DNA.

“Everybody whose genetic roots are outside Africa [is] partly descended from Neanderthals,” says Svante Paabo, a geneticist at the Max Planck Institute for Evolutionary Anthropology. “So there are billions of people, in the order of six, seven billion people, who actually carry parts of the genome of Neanderthals today.”

Two papers published in early October uncover more about Neanderthals and their genetic legacy in modern humans. Paabo co-authored one, appearing in Science, which estimates that some of us carry up to 2.6 percent Neanderthal DNA — more than previously thought. Meanwhile, researchers writing in the American Journal of Human Genetics analyzed the genes of more than 100,000 modern humans and linked Neanderthal DNA to traits like our hair color, skin tone, and even our sleeping habits.

To estimate how much Neanderthal DNA is in modern humans, Paabo and his colleagues sequenced a genome from a Neanderthal woman who lived approximately 52,000 years ago. Her remains were found in a Croatian cave — an important detail because to date, the only other high-quality Neanderthal genome scientists have is from an individual in southern Siberia, who lived far from the center of Neanderthal-human activity.

As Paabo explains, getting quality DNA from Neanderthal remains is tricky business. The bones in the Croatian cave were there for thousands of years, during which time soil bacteria moved in, bringing their own DNA with them. Paabo and his colleagues analyzed 19 different bone fragments from the cave, looking for the one with the most Neanderthal DNA remaining.

“For this particular bone, there were parts of it that up to 10 percent of the DNA actually were of Neanderthal origin,” he says. Then, he explains, the researchers extracted the Neanderthal DNA using advanced techniques, processed it and fed it into sequencing machines, and mapped it to the human genome to see where the fragments fit.

They found the Neanderthal woman from the Croatian cave “was quite substantially [more closely] related to the Neanderthals that interbred with modern humans than the Siberian one,” Paabo explains. The result is that researchers can identify more Neanderthal DNA in modern humans — in the order of 4 million more base pairs per individual, he adds. One of those Neanderthal-derived genetic variants contributes to high levels of LDL cholesterol in modern humans; another, to a lower risk of certain eating disorders. “So it's a mixed bag of things that we would regard as good and bad, but we got them in Neanderthals,” Paabo says.

And in the in-depth genomic study of modern humans, carried out by two of Paabo’s colleagues at the Max Planck Institute for Evolutionary Anthropology, researchers discovered a range of Neanderthal influence as well. “They find that, indeed, the Neanderthal contributions are particularly prevalent when we look at skin pigmentation,” Paabo says. “Over half of the strong associations they find is to skin pigmentation.

From here, Paabo says his research questions go in two directions — the first being further back in time. “So the oldest sort of hominid remains we've been able to get tiny amounts of DNA from is over 400,000 years old,” he says. “That's an early Neanderthal ancestor from Spain, so we’re trying to get more DNA there.” His other research option looks to the present — and what makes modern human genomes so powerful.

“What are those variants that made it possible for us and not the Neanderthals to develop technology and culture,” he wonders, “that allowed us to expand and colonize the whole world and compete so successfully — and detrimentally from the point of view of these other hominids that became extinct?”

One dream, he says, would be to find a complete Neanderthal preserved somewhere in permafrost. “That sort of is the best way to preserve DNA,” he says, adding that discovering a frozen Neanderthal is not out of the question.

“In fact, as the permafrost is now melting due to climate change, chances are that maybe one will — one day — find a Neanderthal in the permafrost,” he says.