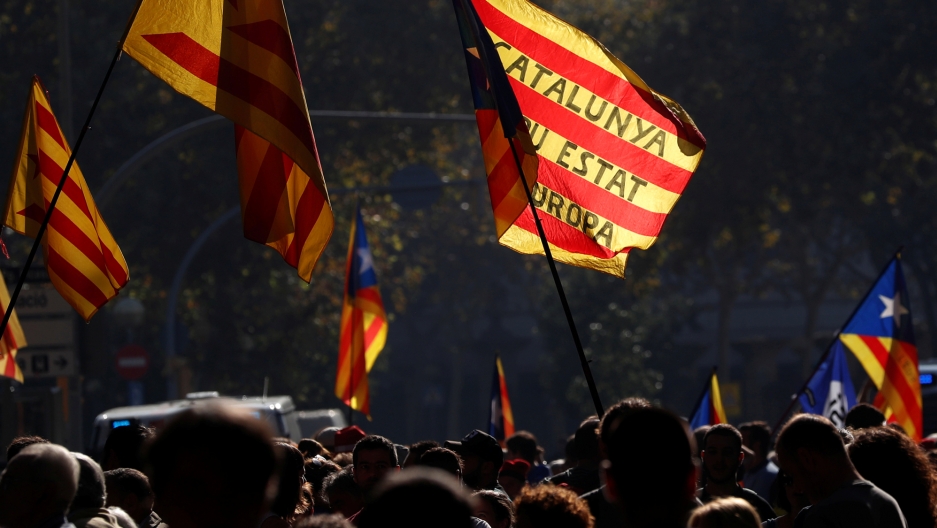 Demonstrators gather outside the Catalan regional parliament in Barcelona, Oct. 27, 2017.

Lawmakers in Catalonia voted on Friday to declare independence from Spain, a move in strong defiance of the Spanish government which the European Union and the United States swiftly refused to recognize.

Tens of thousands of independence supporters massed near the region's parliament in Barcelona cheered with joy after majority separatist lawmakers voted in favor of independence.

"The rule of law will restore legality in Catalonia," he tweeted immediately after controversial vote.

Under the eyes of a nervous nation, Catalonia's regional parliament held a secret ballot, despite an opposition walkout, on a resolution the region's authorities have no legal power to execute.

The motion was approved with 70 votes in favor, 10 against and two abstentions, a result that immediately saw Spanish shares fall sharply.

Catalan opposition legislators, refusing to even consider the resolution, walked out en masse on what one described as a "dark day" for democracy.

But those who stayed behind, cheered, clapped and embraced before breaking out in the Catalan anthem as the tally was announced.

In Madrid, lawmakers voted 214-47 in favor of measures allowing Madrid to take control of Catalonia and depose Catalan President Carles Puigdemont and his deputy and ministers. The measures under Article 155 of the constitution, designed to rein in rebels among Spain's 17 regions, take effect on Saturday.

Puigdemont had opted Thursday not to call elections for a new regional parliament, considered by many to have been the only way to prevent Madrid's power grab.

Instead, he left it up to the regional parliament "to determine the consequences" of the threatened takeover — thus leaving the door open for Friday's independence push.

Roughly the size of Belgium, Catalonia accounts for about 16 percent of Spain's population and a fifth of its economic output.

Shares in Catalan banks fell sharply on Friday, dragging the entire stock market with them, after Catalonia's parliament declared independence.

Resentment to Madrid's perceived interference has been growing for years, culminating in an Oct. 1 independence vote deemed illegal by the central government and courts.

But while fiercely protective of their language, culture and autonomy — restored at the end of the 1939-1975 dictatorship of Francisco Franco — Catalans are deeply divided on independence.

Catalan authorities said 90 percent voted "Yes" in the unregulated plebiscite held up by secessionist leaders as a mandate for independence for the wealthy region of 7.5 million people.

Only about 43 percent of voters turned out, however, with many anti-secessionists staying away and others prevented from casting their ballot by Spanish police in a crackdown that turned violent.

Based on the vote, Puigdemont threatened to declare an independent republic.

EU: Madrid 'remains our only interlocutor'

EU President Donald Tusk said Friday that Madrid "remains our only interlocutor" after Catalan lawmakers voted, a move that dramatically widened a crisis threatening the stability of a key member of the bloc.

The EU and its member states have stood firmly behind Madrid in the escalating standoff triggered by Catalonia's hotly contested Oct. 1 referendum on splitting from Spain.

"For EU nothing changes. Spain remains our only interlocutor. I hope the Spanish government favours force of argument, not argument of force," Tusk tweeted.

Earlier a top EU official said resolving the crisis in Catalonia was crucial to the whole of Europe, while reiterating the bloc's staunch support for the government of Prime Minister Mariano Rajoy.

"We have to respect the constitution and that's extremely important for Europe — so it's not a question of Spain, it's a question of Europe," Carlos Moedas, the European Commissioner for research, science and innovation, told reporters.

"We, as a European Union, have to be on the defence of the constitutional order of Spain."

Brussels has for weeks insisted the standoff in Catalonia is an internal matter for key EU member Spain, resisting Catalan efforts to internationalise the issue and backing Madrid's position that the referendum was illegal.

US: Catalonia an integral part of Spain

The US government reacted Friday saying it considers Catalonia an "integral part of Spain" and supports Madrid's measures to keep Spain "strong and united."

"The United States enjoys a great friendship and an enduring partnership with our NATO ally Spain," State Department spokeswoman Heather Nauert said in a statement.

"Catalonia is an integral part of Spain, and the United States supports the Spanish government's constitutional measures to keep Spain strong and united."

Nauert added that the United States and Spain "cooperate closely to advance our shared security and economic priorities."

As lawmakers argued inside the Catalan parliament, thousands of activists gathered outside under the banner: "The Republic awaits, let's defend it."

Some sported pro-independence banners, others waved the red-and-yellow Catalan flag to send a message to lawmakers.

There was protest inside the building too, with about 200 separatist mayors, in full regalia, chanting "Independence," until being silenced.

Regional representatives of Rajoy's conservative Popular Party, left the Spanish and Catalan flags behind on their seats when they stormed out with other opposition legislators.