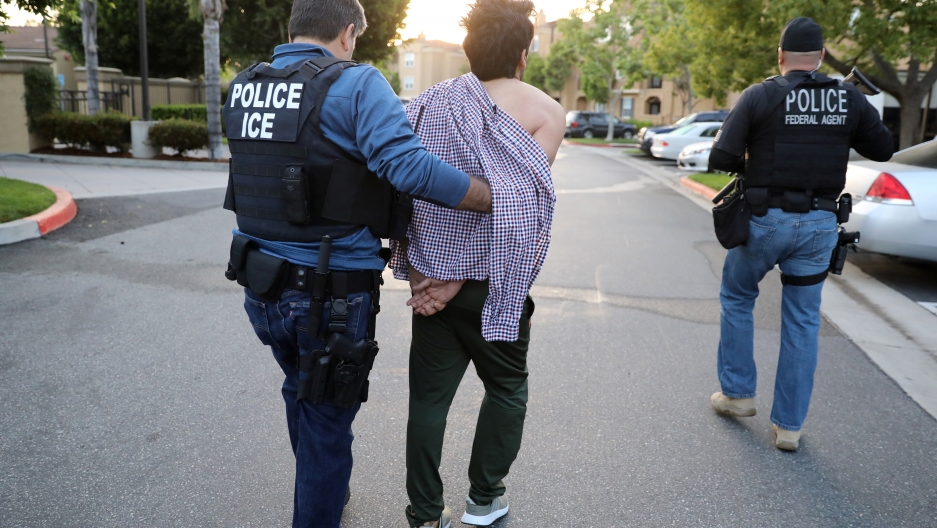 Under President Donald Trump, immigration arrests have jumped by nearly 35 percent. They’re happening at courthouses, restaurants and in front of people’s homes. And these days, anyone who isn’t authorized to be in the country — from gang members to church pastors — is fair game.

These high-profile arrests put immigrants on high alert and attract media attention, but the actual number of deportations has dropped, in part, because overwhelmed immigration courts just can’t keep up.

The Trump administration has a plan to solve this problem: It wants to dramatically expand the authority of on-the-ground officers to expel immigrants without a judge’s review.

While the move has gotten far less attention than splashy raids and the border fence, it has the potential to radically change immigration enforcement nationwide. But there are already flaws in the current system. And legal experts are raising questions about whether the expansion would violate the US Constitution, and would lead to the wrong people being deported.

This fast-track deportation is called “expedited removal,” and it was designed to quickly deport a certain kind of migrant: those who had recently arrived. For the past two decades, it has been used in a more targeted way near the border. Past administrations have expanded it gradually. Trump’s proposed expansion would take it across the nation.

Currently, expedited removal allows border officials to unilaterally send back immigrants if they’re detained within 100 miles of the border and have been in the country for less than two weeks.

“Basically, there’s an officer who acts like a judge and acts like an attorney and decides whether or not you have a legal right to be in the United States,” said Jennifer Rozdzielski, who heads the deportation defense team of the Law Offices of Carl Shusterman, an immigration law firm in Los Angeles.

That’s possible because the US Supreme Court has said that constitutional rights such as due process aren’t as strong at the borders, in part because of national security concerns.

It’s a process that’s starkly different from a typical deportation, where immigrants are given multiple chances to challenge their removal before a judge. That process can take years.

In contrast, expedited removal is remarkably efficient. Immigration hard-liners supported its creation in the 1990s.

Related: 20 years ago, asylum seekers were not automatically put in immigration detention

“There’s no reason that taxpayers should have to subsidize long, drawn-out immigration court proceedings for people who have just recently arrived in the country illegally and have been pretty much caught in the act,” said Jessica Vaughan, director of policy studies at the Center for Immigration Studies, a group that wants to restrict immigration 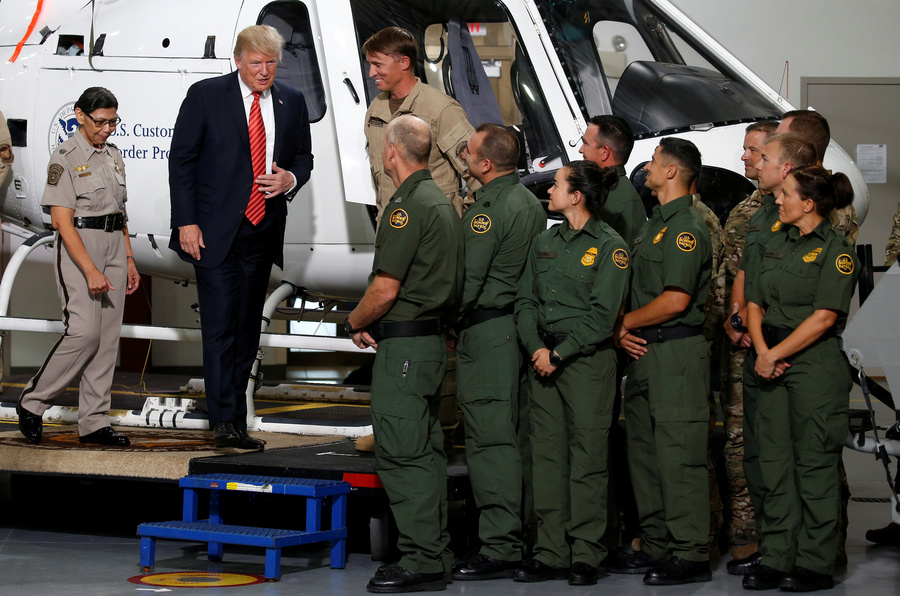 US President Donald Trump greets Border Patrol agents as he tours the US Customs and Border Patrol facility in Yuma, Arizona, US, August 22, 2017
Credit:

Under Trump’s plan, expedited removal would be transformed from a specialized tool for recent crossers arrested near the border to a blanket policy that could be used anywhere, potentially on people with deeper ties to the country. It would be expanded to cover the entire country, for anyone who’d been in the United States for as long as two years, the furthest extent conceivable under the law.

And it could be used by Immigration and Customs Enforcement agents in raids on homes and businesses across the country. A data analysis by the Immigrant Legal Resource Center, an advocacy group, estimates that about 180,000 more people could be deported this way a year.

“The expansion of expedited removal would be a game changer,” said Claude Arnold, who retired three years ago as a special agent in charge of ICE Homeland Security Investigations in Los Angeles after 30 years with the agency.

Related: Is the US a 'safe' country for refugees?

The Department of Homeland Security is still working out the details, and it could announce a new policy any day.

As it’s being considered, here are three things you should know:

1. The current system is flawed

When you hear about people who’ve been deported right after they’ve crossed through the desert or swam across the Rio Grande, that’s often expedited removal in action.

They’re seemingly clear cases of illegal entry, and in recent years, about 40 percent of immigrants are deported that way. But problems come up in the process.

The most extreme errors are when border officers deport US citizens. In 2000, a developmentally disabled woman wasn’t able to convince immigration agents that her American passport was real. They shackled and detained her, then sent her back to Jamaica, where she had been visiting relatives. She sued the government for $8 million, and the parties settled for an undisclosed amount a few years later.

Border inspectors can even turn away someone with a valid visa if they think the visitor is lying about why they’re here. That happened to Faisal Khan and his sister, who traveled from Pakistan to visit their brother in Chicago in 2009. The siblings had valid tourist visas, but an immigration officer at the airport suspected that they were planning to stay. Given his authority under expedited removal, he ordered them deported.

The Khans tried to fight their case, and in his order, a federal court judge raised questions about their deportation, and argued that expedited removal is “fraught with risk of arbitrary, mistaken, or discriminatory behavior.”

But that judge also acknowledged that the law is clear: Except for rare cases, courts can’t review expedited removal cases — no matter how problematic they may be.

Expedited removal was originally created to combat asylum fraud. But immigrants can still try to seek asylum in the process if they tell an immigration officer that they are afraid to return to their country. From there, expedited removal slows down and immigrants get a chance to see a judge.

Here, too, there have been deficiencies. The ACLU has documented a caseof an asylum-seeker who was quickly deported, only to be raped after she was sent back across the southern border.

In 2003 and 2004, the US Commission on International Religious Freedom observed expedited removal proceedings, and found that border officers didn’t offer some asylum-seekers a chance to seek safe haven. The process, the commission wrote, has “serious flaws placing asylum seekers at risk of return to countries where they could face persecution.”

The government is also using expedited removal in an attempt to trump other protections. Earlier this year, Department of Homeland Security officials sought to deport children who had been granted special humanitarian protections by a judge and are currently on the waitlist for a green card.

The efficiencies of expedited removal are clear. But taking the policy nationwide raises a big question: Would it be legal?

Courts have found, for national security and law enforcement reasons, that constitutional rights around due process are more limited on the border.

If expedited removal is expanded nationwide, that calculus changes. Once someone is in the country, the US Constitution applies to everyone — regardless of citizenship.

“The law is quite strong that a person in the United States physically has strong constitutional recognition of due process rights,” said Hiroshi Motomura, a law professor at UCLA.

Since expedited removal doesn’t allow immigrants to make their case against deportation, the courts could find that this violates the Fifth Amendment.

Two former immigration chiefs have already said that they believe an expansion of expedited removal would be legally questionable. Under President George W. Bush, ICE considered its expansion, but decided against it because of legal concerns.

Still, Nolan Rappaport, a retired immigration lawyer who was detailed to the House Judiciary Committee, said he doesn’t see a constitutional problem with the expansion. He said that the US Supreme Court has also held that immigrants who haven’t been formally accepted into the country by the government don’t have constitutional rights. Instead, he said, they are “only entitled to whatever due process Congress gives to the person.”

3. Expanding expedited removal means more people will be quickly deported — and some of them in error

The lack of external review in expedited removal has immigration advocates and legal experts worried that a nationwide expansion will lead to more mistakes in deportations.

That concern is based on another unanswered question: If immigrants are picked up, how would they prove they’d been in the country long enough to avoid expedited removal? What kind of proof would they need?

The Department of Homeland Security declined to respond to questions about the proposed expansion of expedited removal because it is a pending policy.

But Claude Arnold, the retired ICE special agent, said it’s likely that apartment leases, utility bills or pay stubs would do the job.

While immigration advocates worry that immigrants won’t have these documents handy, Arnold said that’s not necessarily the government’s problem.

David A. Martin helped craft the legal language for expedited removal as the top attorney of the federal immigration agency under the Clinton administration, and he said a nationwide expansion is a bad idea.

“There’s so much more of a possibility away from the border area that you pick up people who have actually been here for many, many years, people who are lawful permanent residents that don’t happen to have their green card with them, even people who are citizens but don’t speak very good English,” he said. “There’s just too many possibilities for mistake or occasional abuse.”

Brendan Raedy, a spokesman for Immigration and Customs Enforcement, which would carry out expedited removal away from the border regions, said in a statement that ICE does “targeted immigration enforcement in compliance with federal law and agency policy. ICE does not conduct sweeps or raids that target aliens indiscriminately.”

And for its supporters, potential error isn’t a good reason to scrap an expansion.

“Mistakes can be made in any kind of law enforcement,” said Jessica Vaughan of the Center for Immigration Studies. “But that’s not a reason not to do it. The important thing is to make sure that there are safeguards available to people to correct mistakes, and that enforcement officers will be held accountable for those mistakes.”

This story was originally published by Reveal from The Center for Investigative Reporting, a nonprofit news organization based in the San Francisco Bay Area. Learn more at revealnews.organd subscribe to the Reveal podcast, produced with PRX, at revealnews.org/podcast.