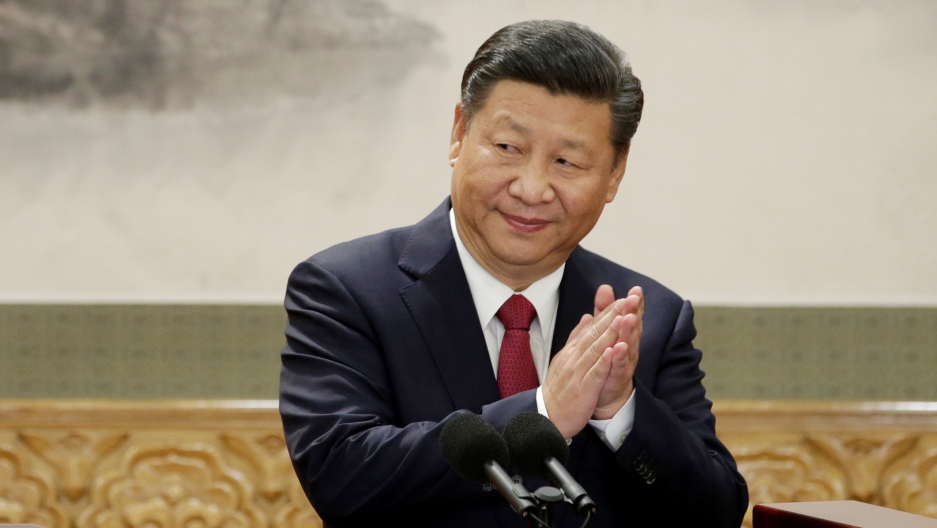 China's President Xi Jinping claps after his speech as he and other new Politburo Standing Committee members meet with the press at the Great Hall of the People in Beijing, Oct. 25, 2017.

Xi led the new members of the elite Politburo Standing Committee in front of television cameras at Beijing's massive Great Hall of the People after their selection by 204 party officials in a closed-door vote.

Xi, 64, secured a second five-year term as general secretary of the Communist Party after his political theory was enshrined in its constitution. With no clear successor emerging Wednesday in a revamped ruling council, Xi cemented his grip on power and set the stage for him to dominate China for decades to come.

He was also reappointed head of the country's Central Military Commission.

Premier Li Keqiang, 62, retained his seat on the seven-member committee while five other men — all little known outside China — replaced comrades who had reached an informal retirement age of 68.

In a speech, as the other members stood expressionless in dark suits, Xi heralded a "new era" for the country under his rule and said the party "must get a new look and more importantly make new accomplishments."

But the new ruling council looked decidedly old, raising doubts that any could succeed Xi.

"He wants to keep pressure on everybody and enjoy power for five or 10 years without having his hands tied."

All the committee's members are at least 60 years of age. Under the current rules, they would be too old to serve the customary two terms as the party's leader at the next congress in 2022.

Xi was elevated to the committee in 2007, when he was 54, and succeeded Hu Jintao as general secretary and president five years later. 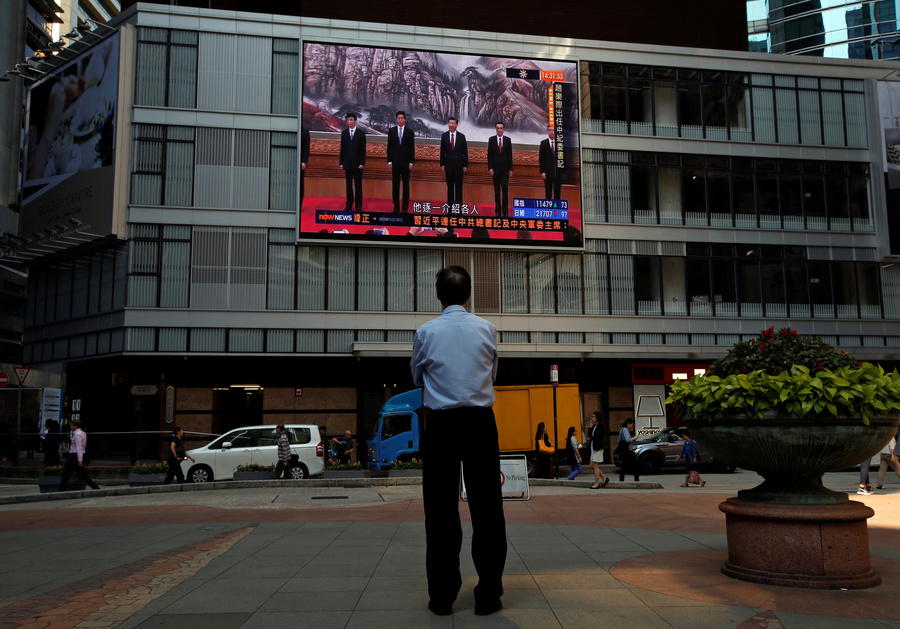 A man watches a news broadcast of China's President Xi Jinping and other new Politburo Standing Committee members attending a meeting in Beijing, outside a commercial building in Hong Kong.

Zhao, a Xi ally, was also appointed as head of the anti-corruption agency, which has brought down 1.5 million officials including several of the president’s rivals since 2012.

Despite their promotion to the nation's highest leadership circle, they are likely to have much less influence than their predecessors under a newly empowered Xi.

His reappointment capped a twice-a-decade congress of the Communist Party that gave him a freer hand to accomplish his ambition of turning China into a global superpower with a world-class military by mid-century.

The constitutional amendment to include "Xi Thought," which the congress passed Tuesday, has put Xi in the rarefied company of the nation's founder Mao Zedong, and Deng Xiaoping, the architect of its economic reforms.

"He will use this boost to push forward his ambitious agenda," said Matthias Stepan of Germany's Mercator Institute for China Studies.

"It will guarantee him a place in the history books."

The accolade firmly establishes Xi as the country's locus of power, potentially upending the collective model of leadership promoted by Deng and embraced by Xi's two predecessors, Hu Jintao and Jiang Zemin, who both stepped down after two terms.

In the past two administrations, decisions were the result of horse-trading and consultation among members of the standing committee, the council of party elders which has led China since Deng's death in 1997.

But with his name in the constitution, Xi has become the nation's ultimate authority, likely giving him the last word on all major decisions.

The document's "all-round embracing of Xi's thought reflects the high degree of consensus the Party has built around its leadership core," the state-run China Daily wrote in an editorial Wednesday.

During his speech, Xi called for ever stricter management of the party, suggesting his grip on power will only increase.

Over the last five years, he has waged a ruthless campaign on official corruption, but party discipline is "a journey to which there is no end," he said, calling on members to "rid ourselves of any virus that erodes the party's fabric."

At least one important figure did not make the cut, as Xi's right-hand man Wang Qishan, 69, vacated his standing committee seat.

Analysts had thought the leader of the country's anti-corruption campaign might be kept on in defiance of the party's unofficial guideline that cadres retire at 68.

The BBC, The Economist, the Financial Times, The Guardian and the New York Times were denied invitations to cover the unveiling despite wide access granted to other news outlets, according to the Foreign Correspondents’ Club of China.

“It is hard to avoid the conclusion that these media organizations have been singled out to send a message,” it said in a statement, adding that using access as a tool to punish journalists violated principles of press freedom.