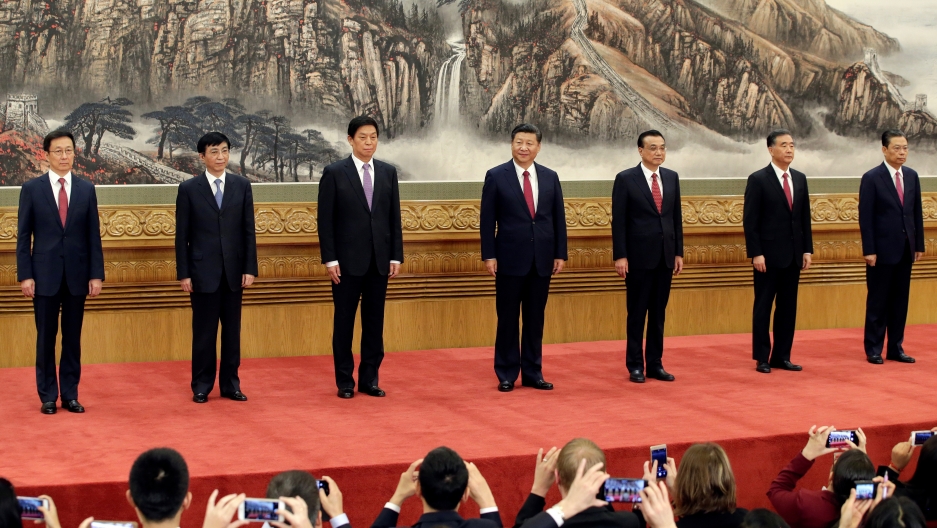 When it comes to running China, the most powerful officials in government are probably the members of the Politburo Standing Committee, lining up here for the news media at the Great Hall of the People in Beijing on October 25, 2017. But the man with the most power of all, standing at center stage, is President Xi Jinping.

He’s known as Uncle Xi. But Xi Jinping has a long list of official titles and Chinese president isn’t even the most consequential of them. President Xi is the general secretary of the Chinese Communist Party. He is the chairman of the Central Military Commission. Xi has been formally recognized by the party as a “core leader,” and sometimes he’s referred to as the “Paramount Leader” of the People’s Republic.

Xi was already a powerful man. And on Tuesday, Xi got yet another promotion. His name went into the Communist Party’s constitution, enshrining his stature right alongside two of modern China’s most prominent founding fathers, Mao Zedong and Deng Xiaoping.

The World's Marco Werman spoke with Chris Buckley, a Beijing-based correspondent for the New York Times who’s been covering the 19th Party Congress meeting that wrapped up on Tuesday.

Marco Werman: The Party Congress in China happens once every five years and these events are meticulously scripted, choreographed, and very much non-transparent to outsiders. But we got some news out of the final day Tuesday. What do you think this year’s party congress will be remembered for?

Chris Buckley: I think, above all else, it’s going to be remembered for elevating Xi Jinping very much to the center of Chinese politics and suggesting that he's going to be a powerful presence in Chinese politics certainly for the next five years, and possibly beyond that. I say that because the report that Xi Jinping gave at the start of the congress last week set out a very broad agenda of change that spans not just years, but decades going right up to the middle of the century. By that time, Xi said that China is going to be a modern socialist great power. And the indications are so far that Xi Jinping is also going to gain an upper hand in the personnel arrangements that come out of the congress. So, he’ll come out of this with enhanced political backing and also enhanced loyalists within the party elite who are going to follow through on his policies.

It's also interesting that Xi’s name has now been enshrined in the constitution, along with Mao and Deng. What is the significance of that?

Just to explain, this is the party’s constitution, so these are the rules for the Communist Party itself. And this is different from the state constitution. But this certainly has implications for the entire country. And it doesn't have any direct political implications, but it adds to the halo of power and authority that Xi Jinping possesses. It now puts him on kind of a political pantheon with Mao Zedong and Deng Xiaoping. It doesn't necessarily mean that he's as powerful as Mao. But it does suggest that he is seen as a transformative leader who, like Mao led the revolution and Deng Xiaoping led China through reform and opening up, the party documents are now saying that Xi Jinping is preparing to lead China into a new era — one which he dominates.

Will the public go along with that narrative that Xi is as great as Mao?

Public attitudes towards Xi Jinping and Mao are quite complicated in China. I think what you find, especially outside of the big cities, that many ordinary people welcome quite a few policies of the past five years, especially the crackdown on corruption. That has been popular with many people here. That doesn't necessarily mean that people like all of Xi Jinping’s policies. And it doesn't mean that they accept or like the idea of his being as strong as Mao. But he does have a strong basis of support in the country at large and that's probably going to continue being so, as long as Xi Jinping can address the economic problems building up in China and ensure the economy keeps growing and that people's incomes keep growing.

I should ask you to look inside the party at its rank and file, and what this all might mean for them. During the Party Congress, Xi was called the absolute leader and when asked for a show of hands by those not in favor of Xi, party members shouted, “None!” Is that sort of display of support genuine? What kind of support does Xi have inside the party?

Over the past few years, there have been a number of policies introduced by Xi Jinping that you would think would be quite unpopular with many party members and officials. In particular, the crackdown on corruption has removed a lot of “gray income." This is not necessarily kickbacks and outright bribes, but money that officials had access to before has certainly shrunk. Officials are under much more scrutiny than before, through discipline inspection visits and other forms of scrutiny from the top as well. So, it's become more difficult to be an official and you can imagine that some of them would probably be grumbling about some of those policies.

But in the current political environment in China, it's very difficult for that kind of rumbling to surface in the public, and it’s even more difficult for it to coalesce in some sort of organized or coherent opposition  [within the party] to Xi Jinping. I think the other side too is that, even though officials might have had their pay cut because of the anti-corruption moves in a way that Xi Jinping has enforced, my experience is that even people who've lost out through those changes understood that corruption was becoming a really serious problem in China — that it was something that was eating at the very sinews of party power. Even among people who have lost out, there’s a kind of ambivalence and an acceptance that something had to be done.

How much of the news from this party congress is targeted externally? Because one thing that President Xi has done is to portray himself as a responsible global leader. Do you see a connection here?

This is primarily a domestic political show, there's no doubt about that. But certainly, China is very much aware of its rising prominence in the world. And you could see that even in Xi Jinping’s work report, which he gave to the congress last week. There was a lot of emphasis in that report about China becoming a strong power or a great power. And that can carry different implications, but it certainly suggests that China wants to become a more engaged country in the world — projecting its interests, acting as a broker in some ways, also using its “One Belt, One Road” initiative to build infrastructure and markets in other countries. So, there is that awareness there. And I think it's going to become even clearer after the congress is over and the big propaganda push really takes off.

Do you think there's any connection to this move today to enshrine Xi Jinping as a great Chinese statesman and China's desire to overtake the US on the world stage, and this notion that the White House — at least, the notion in some corners — is an adult day care?

Well, the party work report certainly didn't mention anything about Donald Trump or the United States. But my take here is that what Xi Jinping has in mind are two things. First, he wants to return the Communist Party to the center of economic and political life in China. He came in after a period when corruption and internal fighting within the party had eroded some of its authority. What he's trying to do, and what he's been trying to do the past five years, is to re-entrench the party, so that it’s in control over political dissent, over official behavior, over what people can read and write and say, is stronger than ever. That’s part of his agenda.

The other side of the agenda is returning China to the center of the global stage. I think that's even mentioned in the work report. Xi’s vision laid out in that work report is about China becoming a modernized socialist great power by the middle of the century. And I think, more or less by implication, that means that — at least in Xi Jinping’s mind — China will be a peer power with the United States. Not necessarily in every area of the world or every dimension of power, but one that can stand side-by-side with the United States on the global stage and protect China's interests and on the global stage as well.

From there in Beijing, does it feel like things in the US-China relationship since Donald Trump moved into the White House in January have changed in any really significant ways?

We're going to find out about that in a couple of weeks when President Trump visits Beijing for the first time as president. We'll get a lot more clarity then about the state of the relationship. Donald Trump has said some friendly things about China and Xi Jinping, but he’s said some unfriendly things as well. He’s made threats about trade, he’s flashed his impatience with China over North Korea and so on. I think what you found with China's behavior toward Donald Trump is that they have learned to ignore the tweets. When these statements come out on the internet from President Trump, you very rarely find that there's any official response from China — or at least a strong official response. They just let these things ride out and they focus very much on their interests, and they focus very much on trying to win over Donald Trump to their view of the world as well. I think we saw that was the case when President Xi visited the United States fairly recently.