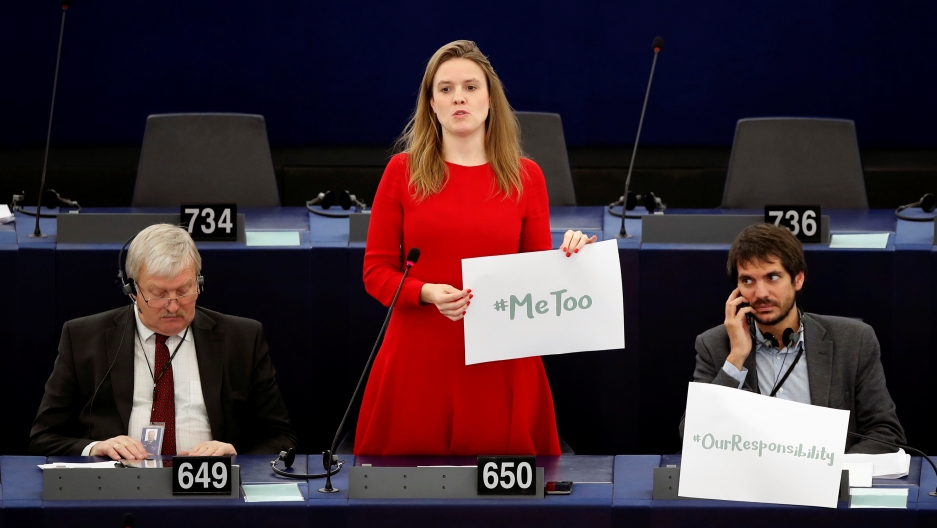 European Parliament member Terry Reintke (center) holds a placard with the hashtag, #MeToo, during a debate to discuss preventive measures against sexual harassment and abuse in the EU at the European Parliament.

The Harvey Weinstein scandal has sparked conversations about sexual harassment around the globe — including in European Parliament.

Several women spoke up during a debate Wednesday about sexual harassment in the European Union, taking the opportunity to call in to question the European Parliament’s workplace policies and culture.

Politico has collected over 100 stories about sexual harassment in Brussels — over 30 of them linked to the European Parliament — through a confidential form.

Reporter Ryan Heath has been part of that effort for the past five months. He says they’ve had an influx of new stories about harassment recently.

“It's been very difficult to get people to go on the record, and the Weinstein scandal really was a tipping point,” says Heath. “You might say it gave people more confidence that they could come forward with their stories. And once we had a European commissioner to go on the record and say that she had been a victim of sexual assault, then the floodgates started to open.”

The European Parliament has strong rules banning sexual harassment, and women make up nearly half of the workforce.

But Heath points to unequal power dynamics (members of European Parliament have immunity from prosecution), party loyalties, and different nationalities coming together under one roof as just some of the factors that contribute to the sexual harassment not being addressed.

“It's not the written words that are the problem, it's the cultural practices around them.”

You can listen to the full interview with Politico Europe's Ryan Heath above.