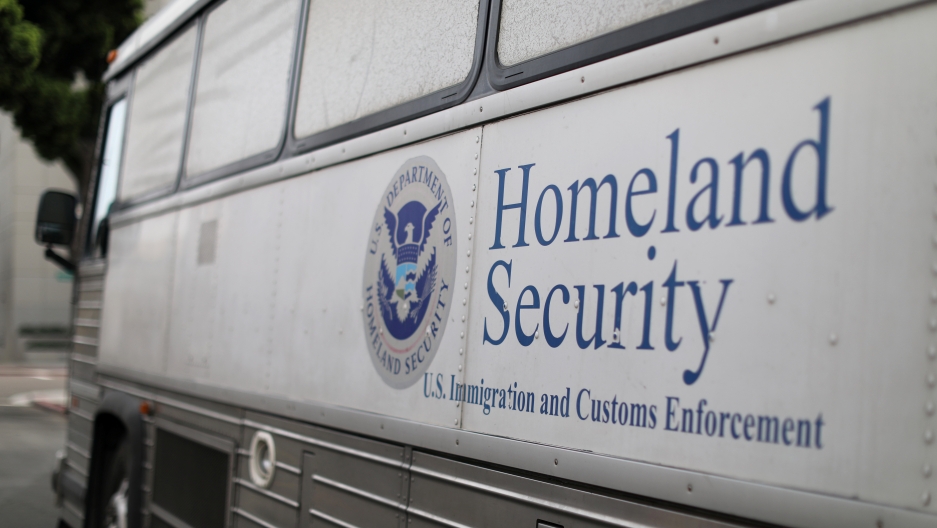 A Department of Homeland Security Immigration and Customs Enforcement bus is parked outside a federal jail in San Diego, California. The DHS says that around 629,000 people overstayed their visas to the US in 2016, a little over 1 percent of all the nonimmigrant visas issued that fiscal year.

Last year, more than half a million people who visited the US overstayed their visas, according to the Department of Homeland Security. Overall, it's a small percentage, just a bit over 1 percent of the millions of visitors who arrive annually. Yet, it is a group of people, often entering legal limbo the day their permission expires, who are increasingly nervous about deportation as the Trump administration's broad immigration crackdown continues.

But why people decide to overstay their visas is not cut and dried.

For some people, overstaying their visa was never the plan. Rather, it is the result of one, or several, extenuating circumstances that convince immigrants they cannot or do not want to return to their countries.

One such story involves Francia and her husband Jorge, who traveled from Colombia to the United States on a tourist visa last August.

“We didn't want to become undocumented people in the US,” Francia explains. She and her husband requested to not use their full names because of the lack of legal status in the US.

Jorge and Francia are from Cali, a city struggling with violence. In 2008, Francia narrowly missed a deadly bombing in a public plaza, apparently linked to clashes between the government and guerrilla groups. More recently, Francia says, her husband was robbed at gunpoint at the internet cafe he owned. “The man who came and robbed him, he wasn’t wearing a mask. You could see his face, so Jorge was scared,” Francia says. “If he filed a [police] report, if he denounced what had happened, the man could kill him; he knew where we lived.”

The close calls convinced Francia and Jorge to leave. At first, they planned to immigrate to Canada. Canada's immigration system is a merit-based points system, where applicants earn points for advanced degrees, English or French fluency, or showing secured employment. Francia says the couple could not qualify for Canadian visas.

Instead, they went to New York City on a tourist visa and planned to cross into Canada illegally after saving some cash. Francia and Jorge hoped that, once in Canada, they might find a path to stay legally, perhaps by applying for asylum there based on the violence back home — an unsure path, but one they were willing to take.

In New York, they rented a small room. Jorge worked at a deli, while Francia cleaned offices and homes. Back in Colombia, Francia worked as a psychologist with at-risk youth, and Jorge was a nurse. They say that they knew being in another country wasn't going to be easy. “We were ready to do cleaning or things that were not requiring the education that, that we have,” Francia says. “And we've done it with love, with patience in our hearts.”

Then, Francia got pregnant. A welcome surprise, albeit not one planned. It also rushed the couple's plan to get to Canada and set up a life there.

Francia found a smuggler online who said he would take them to Canada for $1,200. The couple emptied out their savings to pay the fee. They packed their things and left their rented room. But the day they were supposed to leave for the border, the smuggler never showed. Jorge says he called the man, again and again, to try and get their money back. Eventually, he gave up.

“He knows that we are undocumented,” Jorge says. He worried that the man could report them to immigration authorities.

The situation left Jorge and Francia in New York with no cash and expired US tourist visas. Soon after, they became parents to Isaak, a baby boy.

During her pregnancy, Francia and Jorge made a book for their son. Francia decorated a three-ring binder with stickers and wrote, “Te Amamos” — “We love you” — on the front. They wrote pages of letters to little Isaak about awaiting his birth.

At the same time, Francia became terrified of being deported. Since Donald Trump’s election, and as immigration policies toughened, there were times, she says, when she was afraid to leave the house.

That fear convinced the family to try to head for Canada again. “I'm not a [piece of] paper. I'm a person,” Francia says. “I don't want to continue spending my life fighting.”

They found someone else to take them into Canada and left for Montreal. They made it and are now hoping to find a way there legally. Another chapter of uncertainty begins, but one in which they say they feel safer from deportation in Canada than in the US.

Yet some people overstay their visas because they fear for their lives in a different way and increasingly realize that returning is not an option.

That is the story of Sara, who came to the US on a six-month tourist visa from Grenada in 2001 with her daughter. She asked to use a pseudonym because she is now undocumented in the US.

Sara said that, initially, she was pulled to the US to seek help for her daughter who, soon after birth, showed signs of autism. “It seemed like she was in a different world,” Sara said. It was 2001, and Sara felt that the best resources for her child were in the US, where she had visited a number of times. Also, Sara's daughter was born in the US, a citizen, and perhaps eligible for better health services.

Sara also feared for her own life and, increasingly, felt that returning to Grenada with her daughter was too risky. Sara says her husband was physically abusive. “I was pushed, urinated on; I must have heard the words, 'You’re stupid,' so many times that I honestly believed it,” Sara said, her voice cracking as she remembers.

She remembers one evening, her husband drank. “He had threatened to kill me. And he was very angry. Livid.” Sara increasingly feared that her husband's abuse could touch her daughter.

In New York, Sara's daughter was diagnosed with severe autism and was signed up for treatment: physical therapy, occupational therapy and speech therapy. “And then I realize that my visa is about to run out,” Sara said. “So I write to immigration and ask for an extension.”

Sara got a six-month extension and then looked for a way to stay legally. At the time, she didn’t know there were possible options, such as asylum for women who flee domestic violence. She only knew, she says, that she could not apply for another extension. She decided to stay, let her visa lapse, not risk going back and seeing her husband and not risk moving her daughter away from treatment.

She says it wasn't an easy decision. “I was very distraught,” she says. “I never wanted to overstay.”

Sara says living in the US without documentation has been difficult, depending on odd jobs here and there, including informal work as a teacher’s aide at an elementary school, to get by. She leans on food pantries, food stamps the government gives her daughter and sometimes asks friends for help. She says she feels stuck — “a deep sense of stagnancy, that I can't go forward.”

Sara has spent about 15 years without any documentation. Her daughter is now 18.

Now, Sara is applying for asylum based on the domestic abuse she suffered. Asylum won’t be easy to get. More than half of the people who try for it are denied.

Sara says most days she's too busy working and taking care of her daughter to think about immigration or deportation. But since Trump was elected, every now and then she'll read the news that his administration is targeting a certain group of immigrants, and she wonders when immigration may come for her.

“Almost as if there’s a checklist, who to have leave the country and who to prevent from entering, and he’s going down the checklist, and eventually it will get to me. That's my thought process. Yes, and it's very scary,” she says.