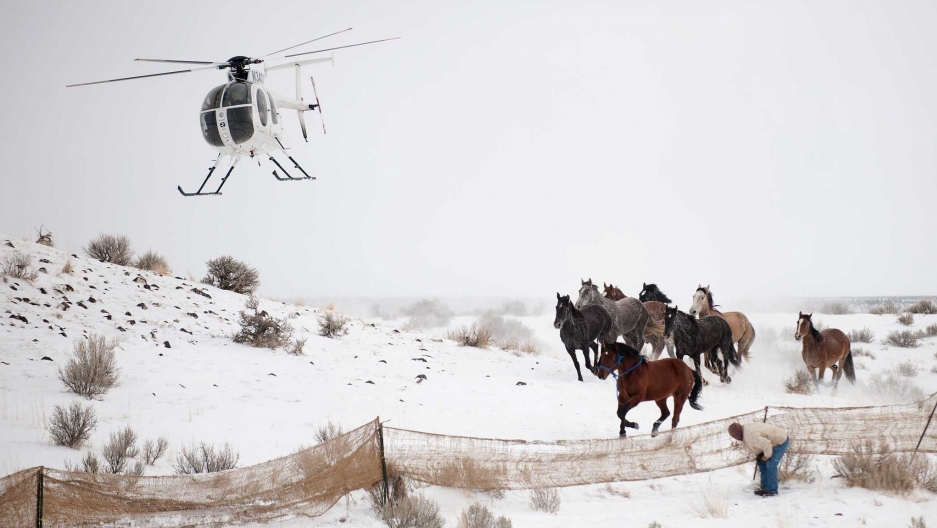 Around 75,000 wild horses roam the valleys and mountain ranges of the American West, descendants of long ago runaways. The horses have been protected by federal law since the early 1970s, but according to the Bureau of Land Management, their numbers are now almost three times what today’s range can support.

How can we coexist with these symbols of American freedom? Pulitzer Prize-winning correspondent David Philipps of The New York Times chronicles the saga of America’s wild horses in his new book, “Wild Horse Country: The History, Myth, and Future of the Mustang.”

“We never have really figured out how to make the idea of the horse as a symbol of freedom, and the practical biology of protecting and yet limiting this horse, work,” Philipps says, explaining that for many years, the Bureau of Land Management, which manages the horses, has rounded up “excess” wild horses and then tried adopting them out, but can’t find enough takers.

Now, the agency puts surplus animals out to pasture — quite literally. In addition to the 75,000 wild horses roaming the West, “we have another 45,000 horses that we've removed through helicopter roundups and, unable to find anything else to do with them, have put them in essentially government long-term storage,” Philipps says, “which practically means we are paying someone in the Midwest a heck of a lot of money — about $50 million a year — to take care of these horses until we figure out what we should do with them. And we've been doing that for about 25 years.”

The situation is at the point where the Bureau of Land Management is spending so much money on horse storage that it can’t afford to conduct roundups, he adds. “The whole system has kind of ground to a halt — and so that 75,000 [wild horses] this year may very well be 95,000 next year and grow at about a 15 percent rate until it collapses.”

In his book, Philipps explores ways we could manage wild mustang populations without expensive roundups. “I think an interesting solution is mountain lions,” he says, explaining that in the course of his reporting, he uncovered data from field biologists whose research was “totally interrupted” when horses became mountain lion lunch. “And I talk a little bit in the book about how you wouldn't need big numbers of mountain lions to make a huge difference in sustainably managing the horse population,” he says.

Another option? Distributing reversible “horse birth control” to wild mares. PZP is a naturally occurring protein that can be injected into mares with a dart gun and uses the mares’ own immune systems to prevent pregnancy for up to a year. (Learn how it works in an excerpt from Philipps’ book.) According to Philipps, the BLM makes little use of the drug, despite its successful outcomes — as he wrote in The New York Times last year, the agency spends that money on horse storage now, too.

“And the only reason they're using [PZP] at all now is because of groups like the group looking at the Salt River herd that essentially volunteer and do it for the government,” he says. “This is a really neat solution and I've seen it work, and it's not only better for the horses, it's better for the taxpayer because you're not stuck with horses that you then have to feed for 30 years that you rounded up.”

But as Philipps explains, change to wild horse management could be coming on a political level, as well. “There is pressure on the Trump administration to loosen the restrictions on what you can do with horses once they're rounded up,” he says. “Right now, you cannot buy them and then sell them to a slaughterhouse. I think there are proposals in place to loosen that up, which has happened in the past. Politically, we'll see if that is possible.

“There are few members in Congress that would openly vote to slaughter wild horses, so it's a matter of whether they could sneak it through or repackage it in a better way. So far, that has not happened in the past several decades, at least in big numbers, although there's been constant pressure to do so.”