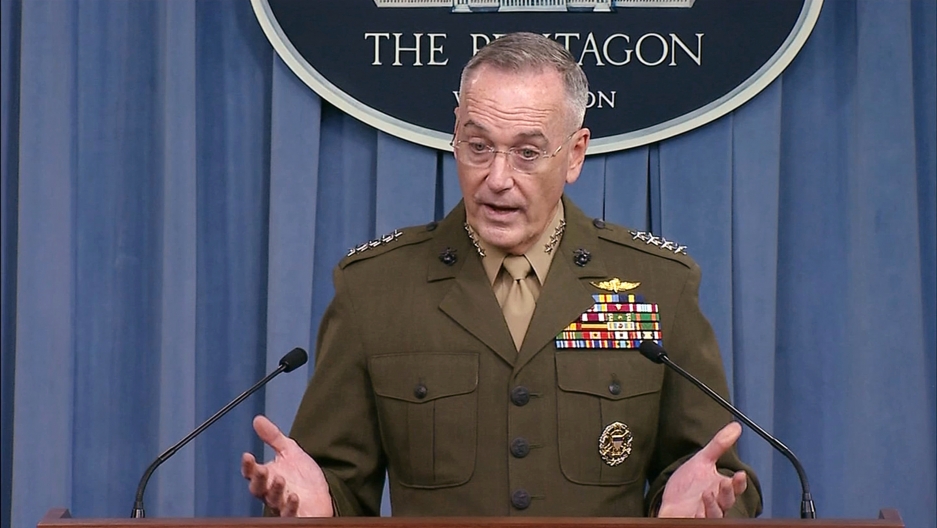 US Joint Chiefs of Staff Chairman General Joseph Dunford is seen in a screen grab from US Department of Defense video as he speaks to the media about the deaths of four Army special operations forces soldiers in Niger during a news conference about the attack at the Pentagon, October 23, 2017.

US Department of Defense/Handout via REUTERS

Pentagon officials are considering a larger campaign in Africa to pursue ISIS. The move comes after ISIS lost its de facto capital Raqa in Syria this month.

ISIS "has aspirations to establish a larger presence" in Africa, the US military's top officer General Joseph Dunford said on Monday.

From Libya to Egypt's Sinai, to East Africa and West Africa the jihadists have already posed a threat, Dunford, chairman of the Joint Chiefs of Staff, told a press conference.

He was discussing the October 4 clash in Niger, West Africa, that cost the lives of four American soldiers.

Along with five Nigerien troops, the US soldiers died on the Niger-Mali border in an attack carried out by locals associated with ISIS, according to Dunford. 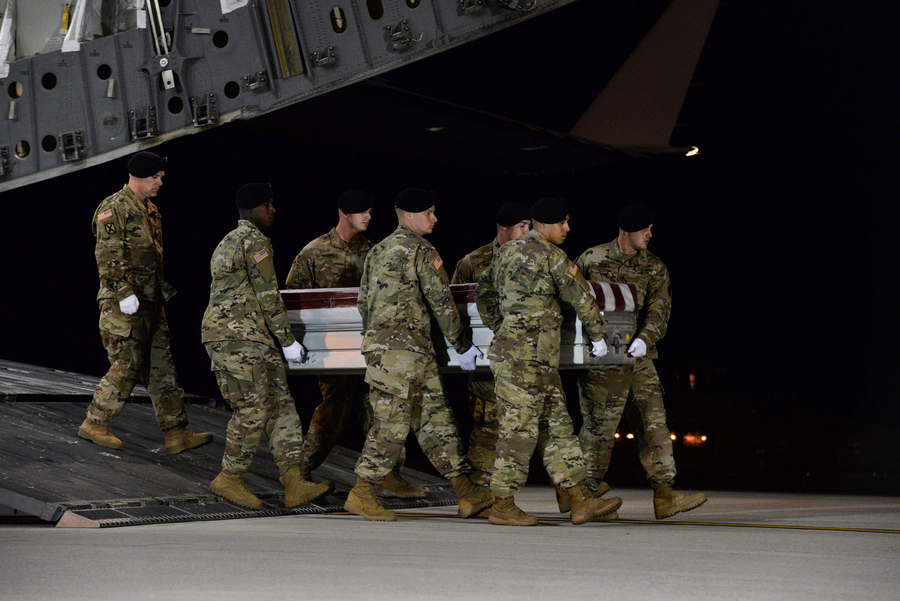 A US Army carry team transfers the remains of Army Staff Sgt. Dustin Wright of Lyons, Georgia, at Dover Air Force Base in Delaware. Staff Sgt. Wright was one of four US soldiers recently killed in Niger.

US Air Force/Handout via Reuters

The incident shocked many Americans unaware of the hundreds-strong US military presence in that country.

Dunford said the military will make recommendations to President Donald Trump and Defense Secretary Jim Mattis "for the allocation of forces that meet what we see as the threat, what we anticipate the threat to be."

On Tuesday he meets military chiefs from 75 countries "to talk about the next phase of the campaign" against ISIS.

After the Middle East, Africa already has the greatest presence of American special forces. Official figures show more than 1,300 of the troops are deployed there.

These elite units train local forces in counter-terrorism and "will only accompany those forces when the prospects of enemy contact is unlikely," Dunford said.

These rules of engagement "are going to change when it comes to counterterrorism operations," Graham said.

He hinted that American troops would be authorized to shoot first on "terrorist" targets, which is not the case now.

The European Union's presidency also warned this month that countries in that bloc must monitor "very carefully" a growing ISIS threat in North Africa, where fighters have relocated.

Dunford said the war is moving to multiple arenas.

"I'm not sure I'm ready to say it's shifting just to Africa. We're dealing with a challenge that exists from West Africa to Southeast Asia," he said.

"I believe ISIS will attempt to establish a physical presence outside of Iraq and Syria" after losing Mosul and Raqa, the general added, using another acronym for ISIS.

In all, the US military has about 6,000 personnel in 53 African countries, Dunford said.

According to a report to Congress by General Thomas Waldhauser, who heads the US Africa Command AFRICOM, the American presence is notable in Chad, the Democratic Republic of Congo, Ethiopia, Somalia, Uganda, Rwanda and Kenya.

The numbers of US special forces varies but the Niger contingent of about 800 is currently the largest in any one country on the continent.

Dunford vowed the US will remain, despite the four fatalities in Niger.

"Our intent is to continue operations there," Dunford said.