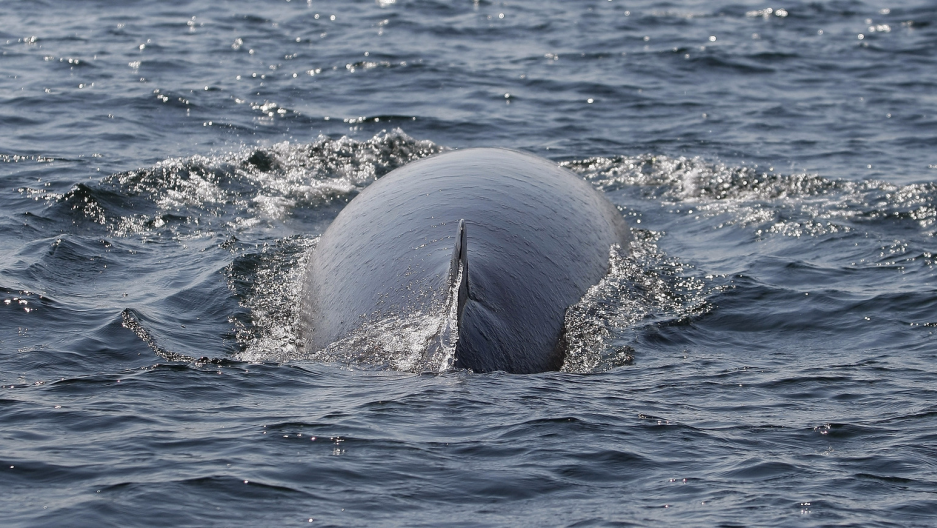 A minke whale is seen swimming during a ride on the Les Ecumeurs boat on the St. Lawrence river at Les Escoumins, Quebec, Aug. 13, 2009. Minkes are one of three whale species recently sighted in the New York Bight.

When you think of New York wildlife, whales probably aren’t the first animals that come to mind — but they’re actually native to the waters around the city. After disappearing from New York waters about a century ago because of pollution and overfishing, the massive animals are returning home.

Video producer Luke Groskin headed out to the New York Bight, the body of water stretching from Montauk to Cape May, to film the whales for Science Friday’s newest Macroscope video. He joined Wildlife Conservation Society scientist Howard Rosenbaum and his team for a scientific whale-watching expedition. The group spotted four whales — two humpback whales, a fin whale and a minke whale. “It was just spectacular,” Groskin says.

To track whale traffic, Rosenbaum and his team use a buoy that detects the sounds made by different whales. “It's out ... between two shipping lanes, right where they're looking to do some renewable energy development,” Groskin explains. The buoy picks up on whale vocalizations and sends signals back via satellite that can tell scientists what kinds of whales are in the area at any given time.

When the researchers spot a whale, they photograph it, geotag the location where they spotted it and even take a small biopsy. “So, they're taking a crossbow with a little empty dart at the tip and they fire it into the whale, and they get a little chunk of flesh and they use that to determine the actual identity and the DNA of that animal,” Groskin says. He notes that for the whale, the experience is not particularly painful. “It’s kind of like getting bit by a mosquito,” he says.

In the bight, the whales feed on silvery schooling fish called menhaden, as do other big marine predators. “You have the stripers, you have bluefish, you have albacore tuna, you have a whole ecosystem that's running off of these menhaden,” Groskin says. “When the whales go barging through them and lunging through them, it's so dramatic.” All the fish popping on the surface actually make a trickling sound, he adds.

He explains that the abundance of fish is the big reason why whales have returned to New York waters. Menhaden are used as bait by fisherman and harvested for products like fish oil or pet food, but in 2012, catch limits were put in place along the East Coast to cap the menhaden harvest. “The conservationists that I spoke to, they said that probably had a big impact in terms of the resurgence of whales,” Groskin says.

While from the film it’s clear that the whales are doing well in the New York Bight, scientist Howard Rosenbaum is careful to point out that their long-term success there isn’t guaranteed. “Animals getting hit by ships are of great concern, the noise associated with shipping and other activities is of great concern,” he explains in the video. “As there are more menhaden, are those fisheries regulated and monitored well enough to make sure that those stocks don’t get depleted? What happens in a changing climate? We have to try to figure out how to protect these animals in light of some of these activities that are either ongoing or projected.”

But for now, the whales are homecoming royalty — although many New Yorkers still don’t know they’re back. “On some level, it's a little depressing because you have, you know, the five boroughs of people that again, when they think about wildlife,” Groskin says, pausing. “It's a pigeon with a bagel or a pizza or something,” adds Science Friday host Ira Flatow.