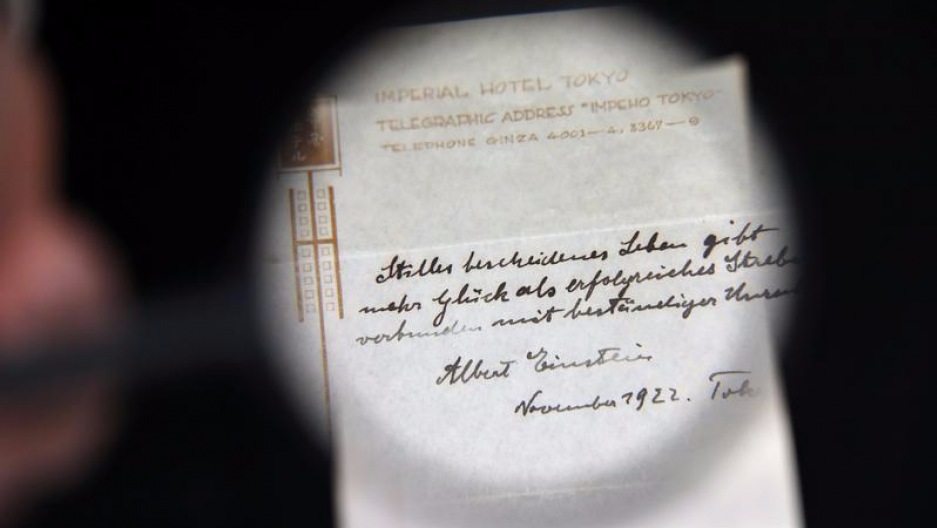 A note written on a Tokyo hotel official paper in 1922 by Albert Einstein is seen before it is sold at an auction in Jerusalem, Oct. 24, 2017.

A note that Albert Einstein gave to a courier in Tokyo briefly describing his theory on happy living sold at auction in Jerusalem on Tuesday for $1.56 million, the auction house said.

The winning bid for the note far exceeded the pre-auction estimate of between $5,000 and $8,000, according to the Winner's auction house website.

The buyer was a European who wished to remain anonymous, a spokesman for the auction house said.

The note, on the stationery of the Imperial Hotel Tokyo, says in German that "a quiet and modest life brings more joy than a pursuit of success bound with constant unrest."

Bids were accepted in person, online and by phone. After an opening price of $2,000, bids rose quickly for about 20 minutes with two potential buyers vying by phone for the purchase in the end.

Applause broke out in the room when the sale was announced. The sale price includes the buyers' premium.

"I am really happy that there are people out there who are still interested in science and history and timeless deliveries in a world which is developing so fast," the seller told AFP on condition of anonymity after the sale.

A second Einstein note written at the same time that simply reads "where there's a will, there's a way" sold for $240,000, according to Winner's.

The German-born physicist, most famous for his theory of relativity, was on a lecture tour in Japan when he handwrote the autographed notes, previously unknown to researchers, in 1922.

He had recently been informed that he was to receive the Nobel Prize for physics, and his fame outside of scientific circles was growing.

A Japanese courier arrived at the Imperial Hotel in Tokyo to deliver Einstein a message. The courier either refused to accept a tip, in line with local practice, or Einstein had no small change available.

Either way, Einstein didn't want the messenger to leave empty-handed, so he wrote him two notes by hand in German, according to the seller, a relative of the messenger.

"Maybe if you're lucky those notes will become much more valuable than just a regular tip," Einstein told the messenger, according to the seller, a resident of the German city of Hamburg.

'Stone in the mosaic'

Two other letters Einstein wrote in later years were also auctioned on Tuesday, fetching prices of $33,600 and $9,600.

In June, letters written by Einstein about God, Israel and physics sold for nearly $210,000 at a Jerusalem auction.

Roni Grosz, the archivist in charge of the world's largest Einstein collection at Jerusalem's Hebrew University, told AFP ahead of Tuesday's auction that it is impossible to determine if the notes were a reflection of Einstein's own musings on his growing fame.

While they hold no scientific value, they may shed light on the private thoughts of the great physicist whose name has become synonymous with genius, according to Grosz.

"What we're doing here is painting the portrait of Einstein — the man, the scientist, his effect on the world — through his writings," said Grosz.

"This is a stone in the mosaic."

Einstein served as a non-resident governor of Jerusalem's Hebrew University and, when he died in 1955, he left the institution his archives — which made it the owner of the world's most extensive collection of his documents.