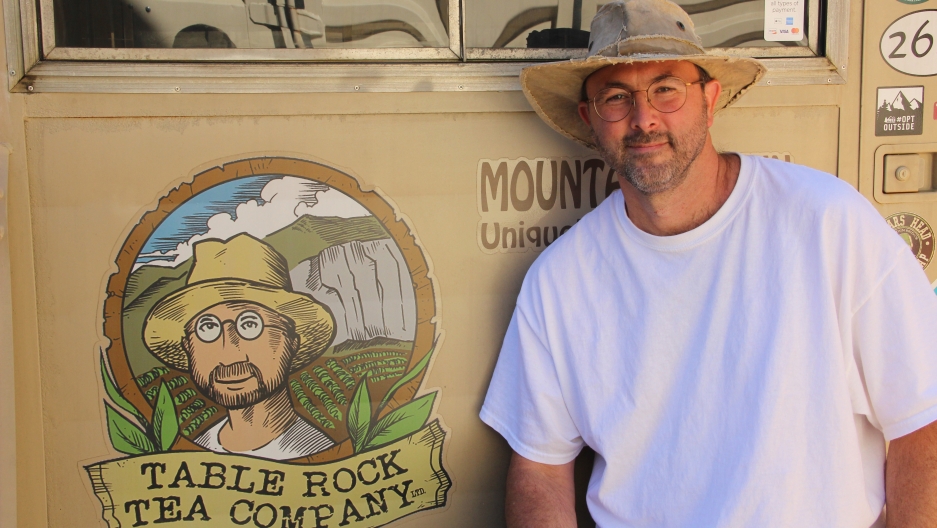 Steve Lorch has a 30-year plan to put upstate South Carolina on the map — as a place for producing great tea.

Steve Lorch is a surgical nurse by profession. His other job is running a tea farm.

When you think of the world’s great tea-growing regions, you might think of parts of India, Sri Lanka, China or Kenya. Odds are, though, you don’t think of Lorch’s adopted hometown of Pickens, South Carolina — a small, economically depressed place in Appalachia. But Lorch is on a mission to change that.

His company, Table Rock Tea, began with just one plant. He was running a clean water project in Kenya, where he fell in love with all things tea.

“I came home and bought a plant online and stuck it in our backyard in our subdivision where we were living. And it happened to grow,” says Lorch, pointing at that exact plant. “We call this one Big Daddy. This is the one that sort of started the whole thing.”

He and his wife moved to the countryside then decided to grow a hedge made from tea plants.

“By the time we got up to 400 or 500, we started thinking: Well, how much does this produce every year? Why don’t we start a tea company?” says Lorch.

Lorch and his wife are now four years into their business plan. He calls that the rocky phase, the proof of concept.

“We had to first see, can we grow tea out here? And then is it reproducible? And then will it make good tea?” says Lorch. “If any of those answers were no, there was no reason to expand into a commercial greenhouse and all that kind of stuff.”

All signs pointed to yes, so the expansion was on. Today, the Lorches have 17 acres and are planning to expand to 30. They've also built that greenhouse and are putting together a “consortium” of growers, other locals. Steve Lorch’s vision is to sell young plants to his neighbors, they’ll harvest them, then sell the tea leaves back to him. Right now, he has six neighbors on board. 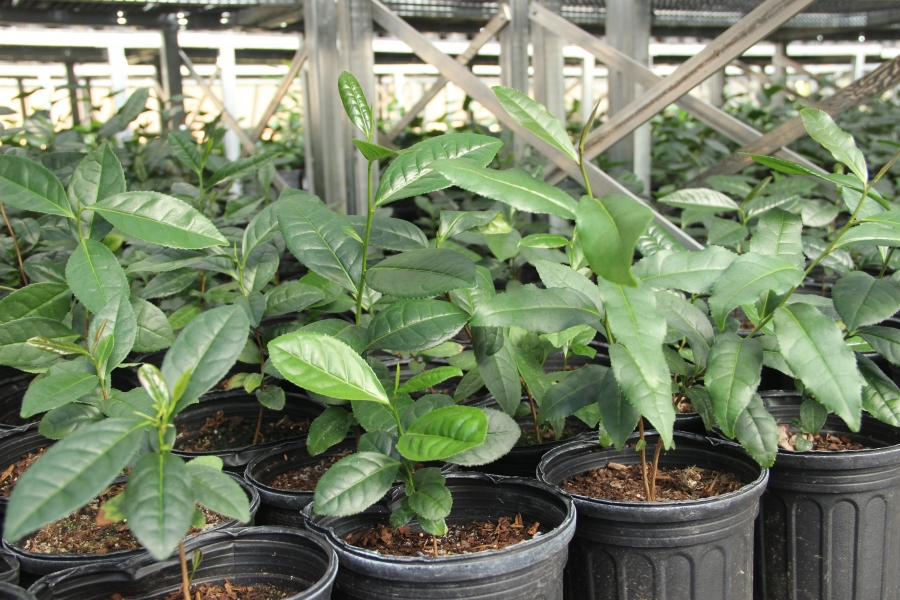 The Lorch’s greenhouse houses about 17,500 plants. All tea comes from the same plant. It’s how you pick and process that gives each tea its unique flavor.

His 10-year plan includes a café, a visitor’s center and a classroom to teach, as he says, “the ins and outs of the art and science of growing tea.”

In 30 years, he’d like upstate South Carolina to be to American-grown tea what Napa is to American wine.

That might sound wildly optimistic. But is it? I asked tea aficionado James Norwood Pratt where the world’s finest teas are grown today. I was looking for a geographic answer — that’s not what Pratt offered.

“The world’s best tea is grown where people take the most care of the plant and its leaf, in regions that are particularly favorable to that plant’s growth,” says Pratt, who has authored many books on tea. “So, it could quite possibly come from Pickens, South Carolina.”

In other words, you need the right soils, climate and knowledgeable people to produce great tea. In Pickens, they have just about the right amount of rainfall and good soil PH to grow tea.

If they can pull it off and produce a great tea in Pickens, Patrick Lark would love it. He’s a city council member and president of the Pickens Revitalization Association. Pickens has a familiar Appalachian small town story — a place that got left behind as work shifted to cheaper, foreign labor.

“This area was just so entrenched with textiles for years. That just kind of left a void here,” says Lark.

Lark is from Pickens. He’s 40 now and calls Pickens an “ideal” place to grow up — a storybook small town. You want to know how small? During our interview a truck rolled by outside, and without turning to look, Lark said, “That’s Danny Adams.”

I asked how he could possibly know that.

“I know he was coming to check on his parents that live down the street from the chamber office here,” says Lark. “It’s a small town."

In recent years, Pickens has suffered from a sharp drop in household incomes, and there is also a growing problem with substance abuse.

Pickens seems like a nice place. But it needs jobs. I asked Lark if he really thinks his town could become the next great tea spot — and have the jobs that could come with it .

“It’s one of those things that, off the cuff, you just kind of scratch your head and say, how is this going to work? Then you go and meet with Steve and see what he’s got going on, and you can’t help but buy in.” 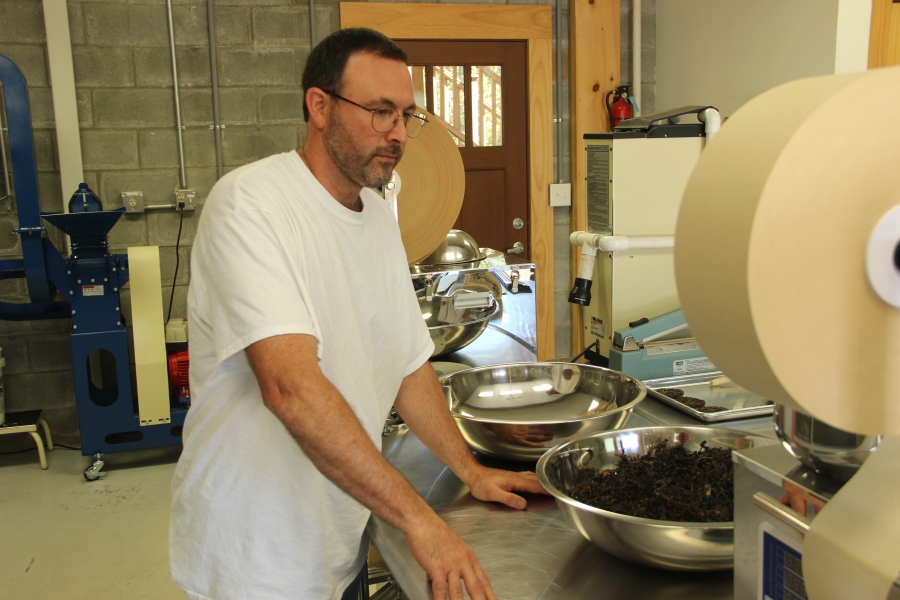 Steve Lorch in his garage turned “micro factory.” He estimates that it costs about $250,000 to start a small tea company in the US. He has been able to set up shop for a fraction of that cost, getting creative and tinkering with some of his machines.

Back in his garage, Steve Lorch shows off what he calls his “micro factory,” a small space filled with cool-looking machines, including a contraption that separates dried leaves then heat-seals them into tea bags.

Because there’s not much of a tea industry in the US, it can be hard to find the right equipment. So, the Lorches had to get creative when, for example, finding a tea oxidizer.

“My wife used to work at Subway subs, and she said, ‘Hey, that’s just a proofing oven,’” says Steve Lorch. “In fact, if you look on the back it says ‘Subway.’”

“My statistics might be a little off on this, but last I had checked, I think a Sri Lankan picker gets about $3 to $5 a day,” says Lorch.

There’s just no way Lorch can compete with that. So, he’ll have to grow better tea and charge more for it. Most teas we buy are blends from many countries, but Lorch’s tea, which is already commercially available, only comes from his farm. Single-sourced tea can fetch a premium.

His boxes — labeled “Hillbilly: America’s Native Tea” with a cartoon of a guy and his dog moonshining tea — just might sound exotic to someone halfway around the world.

I did some informal polling of British, Chinese and Sri Lankan tea drinkers and asked if they’d buy tea from South Carolina. They all seemed skeptical. One Sri Lankan simply responded via email: “Ha, ha, ha, ha, ha.”

I also called the Chinese Tea Company in London and spoke with founder Juyan Webster. She says Chinese teas are the best, but she thinks Chinese consumers might sample South Carolina.

“It’s hard to say. I think people would be willing to try, see what the flavor is like. I think the Chinese would be quite open to that.”

So, perhaps the name isn’t a selling point. Or, at least not yet.

But, in fairness, Steve Lorch is just getting started. And if he can create an extraordinary tea, and he believes he can, maybe the sales and the jobs will follow.

Then, perhaps a few decades from now, we’ll add South Carolina to the list of the world’s great tea growing regions.