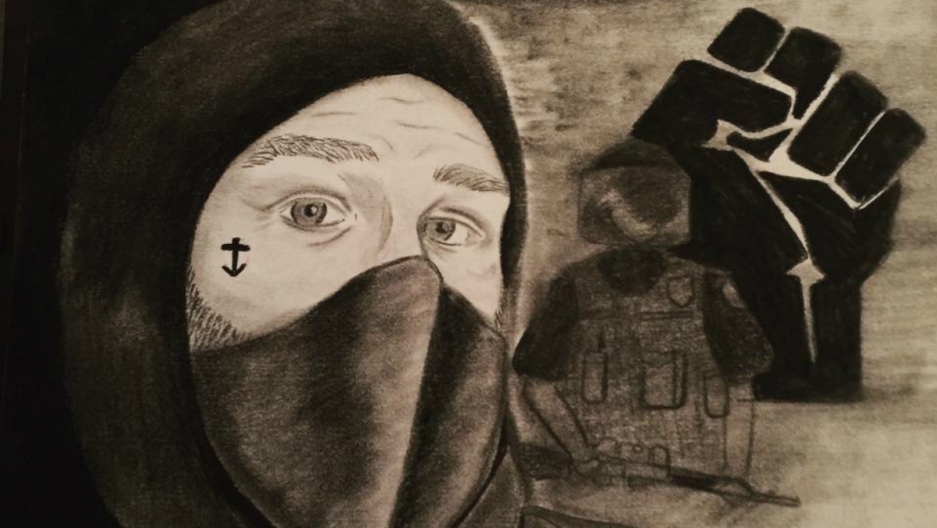 A drawing, called "Resist," of David-Jon, an antifa activist from Portland, Oregon.

Antifa was the buzzword of the summer.

After the events in Charlottesville, it seemed you couldn't watch or listen to the news without hearing the word "antifa." This week on the World in Words podcast, reporter Lidia Jean Kott explores the roots of the word and how the antifa movement came to America. This podcast contains explicit language and content.

1:18 How Peter got involved with “antifa”; He’s an activist, college student from Charlottesville

2:38 Antifa isn’t one organized group; they believe in “no-platforming”

6:39 In the 1930s, Ernst Schneller called for Social Democrats and Communists to come together to join Antifaschistische Aktion to fight the Nazi’s.

7:58 “The term was revived largely in the 1980’s out of initially West Germany, and then a united Germany, as neo-Nazis and the far right movement became resurgent, with the fall of Berlin Wall.”

9:06 There was a coalition in the UK called “Anti-Fascist Action”

10:30 “Nazi Punks Fuck Off” by the American band the Dead Kennedys.

11:54 Anti-Racist Action started in Minneapolis in 1987 by a group of punks called "the Baldies" who were worried about new neo-Nazi groups in their city.

14:19 Daryle Lamont Jenkins runs an organization called One People’s Project that monitors hate groups, and he feels like he’s just been watching these groups grow but no one has been listening to him, or doing anything about it.

16:38 A discussion about violence and antifa

21:28 Lidia Jean goes to Charlottesville for the Unite the Right Rally to meet Peter and to see antifa in action

23:16 Meeting with Peter at the rally

26:37: How the term “alt left” transformed after President Trump used the phrase