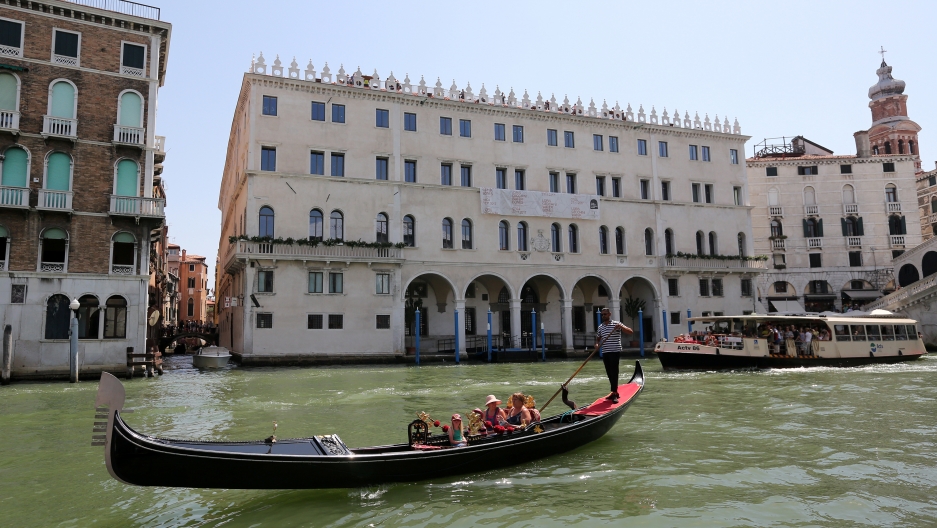 Tourists enjoy a ride on gondola's along a canal near St.Mark's square in Venice, Italy, August 3, 2017.

Venice is living up to its reputation of self-reliance.

In the one-time city-state that was known as "The Most Serene Republic of Venice," almost everyone seems to be planning to vote for greater autonomy in Sunday's consultative referendum.

But nobody is getting too worked up about it. There is not a campaign poster to be seen anywhere.

This is not Catalonia, say many residents of the famed floating city when asked about a vote which is being mirrored in Lombardy, its almost-as-wealthy neighbour in Italy's industrial north.

In 2016, the Veneto region that includes Venice sent $18.35 billion more to Rome than it got back in public services — and taxpayers are not happy about it.

"That might not be a problem if the taxes were well invested, but the truth is that 30 billion euros ($35.52 billion) are wasted every year at a national level," says Luca Zaia, the regional president who initiated a consultative vote that also seeks to devolve powers in the areas of education and infrastructures.

Zaia and his counterpart in Lombardy, Roberto Maroni, are both members of the Northern League, a far-right group that started out as a secessionist movement but has switched its focus to fiscal rebalancing within a united Italy.

It is a discourse that resonates and the referendums have been backed by Silvio Berlusconi's center-right Forza Italia as well as by employer organisations and trades unions.

"It's right that the taxes we pay here should be spent here, not in Sicily," says 84-year-old Giuseppe Colonna.

Artist Nicola Tenderini agrees. "The administration here is efficient, which can't be said for Rome," he says.

In a neighboring shop, Andrea Vianello rejects the suggestion that the Venetians are being selfish. "We want to help Italy and poorer regions, but we would like a bit more money for ourselves."

He says autonomy is woven into Venice's DNA, the city having been an independent power from the 8th to the 18th centuries.

With an unemployment rate of 6.7 percent, compared to a national one of 11.2 percent, the Veneto accounts for 10 percent of Italian GDP, thanks to its dynamic network of small and medium-sized companies.

Based in Solzano, on the outskirts of Venice, Gianluca Fascina employs ten people in a textiles company servicing the fashion industry.

He says he, and most of his peers, will be voting Yes on Sunday. "What I hope is that greater autonomy will make things work better for businesses, on payment deadlines, for example," he says.

"And hopefully it will give us more opportunities to develop and to be helped by the region."

Secession, he says, is not on the agenda. "Veneto is part of Italy and will stay in Italy. It is not like the referendum in Spain."

Tenderini concurs. "A large majority of people do not want to secede," he said.

Jewellery designer Silvia Pazzaglia said she didn't even want the autonomy vote, saying she would be staying at home on Sunday rather than turning out for a "mistaken and completely pointless" referendum.

Turnout looks to be the main issue. A Yes vote in both regions can be taken for granted but, particularly in Lombardy, there are fears a low turnout could undermine the credibility of the result.

For committed secessionists, Sunday's vote is just a trial run for battles to come. "It will allow us to rally as Venetians," says Alessio Morosin, founder of the separatist Indipendenza Veneta.

"We know it will not allow us to realize our objectives, as much for budget as political reasons because the state has debts of $2,723 billion.

"The state is bleeding Venetians dry and once they've realized their mistake, they will opt for a more radical option."