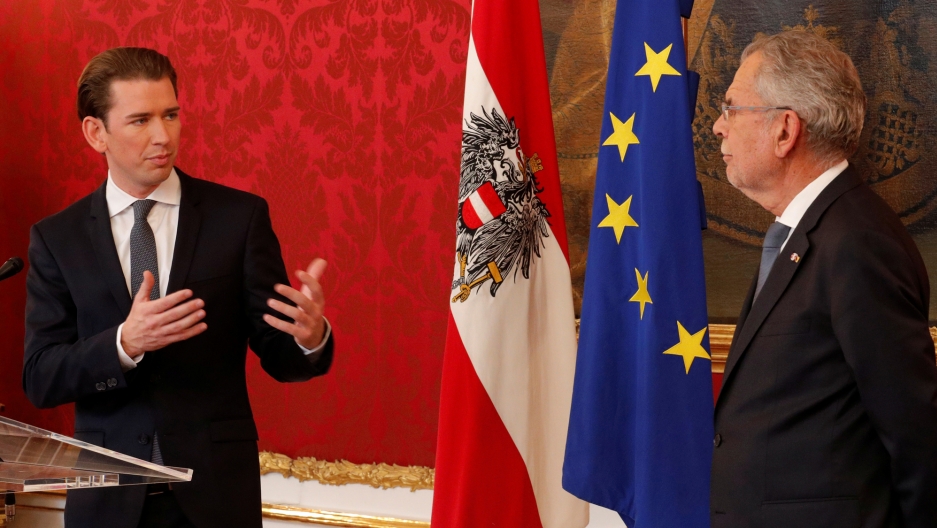 Leader of the People's Party Sebastian Kurz addresses the media after formally being asked to form a government by Austrian President Alexander Van der Bellen in Vienna.

Sebastian Kurz, the newly elected 31-year-old conservative, has been tasked by the Austrian president with forming a government.

Kurz, nicknamed "wunderwuzzi" ("whiz-kid"), is to form a coalition with the far-right Freedom Party (FPOe), potentially giving the European Union a fresh headache.

"I want a government that has the courage and the determination to bring about real change in Austria," he said.

The populist Freedom Party, highly critical of the EU, came a close third with 26.0 percent, just short of its 1999 record of 26.9 percent under controversial former chief Joerg Haider.

Kurz said he will now "sound out" all the other parties in the coming days before entering formal coalition negotiations.

But after an election that saw a shift to the right, Kurz and FPOe chief Heinz-Christian Strache see eye to eye on a host of issues including immigration and cutting taxes.

Strache hosted Kurz for dinner at his home on Wednesday and a meeting of the OeVP's top brass saw all participants except one back a tie-up with the FPOe, the Kurier daily reported.

Kurz could instead try for another "grand coalition" with the SPOe of incumbent Chancellor Christian Kern, 51, but the outgoing tie-up was so acrimonious this is seen unlikely.

An even more remote possibility is an alliance between the SPOe and the FPOe.

On Wednesday Strache said that one condition for forming a coalition was the FPOe getting the interior ministry.

He said he wants Austria's borders secured, more Swiss-style "direct democracy" and a "stop to Islamization."

When the FPOe last entered government, in 2000 under Haider, there was outcry in Israel and Austria was ostracized within Europe but this time no such backlash is expected.

However the FPOe remains ambivalent about Europe, with its manifesto saying the "ideal of a Europe of fatherlands" is "increasingly under threat."

The party wants EU sanctions on Russia lifted and for Austria potentially to join the Visegrad group of eastern and central European countries that has become a thorn in Brussels' side.

It is also allied in the European Parliament to far-right groups such as France's National Front, which called the FPOe's election result "another welcome defeat" for the EU.

Strache, who flirted with neo-Nazism in his youth and could now become deputy chancellor, has also said Britain "will probably end up better off" after leaving the bloc.

European Commission President Jean-Claude Juncker on Monday made a point of wishing Kurz success in forming a "pro-European government" ahead of Austria's turn as EU president next year.

Kurz said on Tuesday that Vienna would continue to play an "active" role in the bloc.

Van der Bellen, who last year narrowly beat the FPOe's Norbert Hofer to be elected president, reiterated Friday that he wanted a pro-EU government and that he reserved the right to refuse to approve the appointment of ministers.