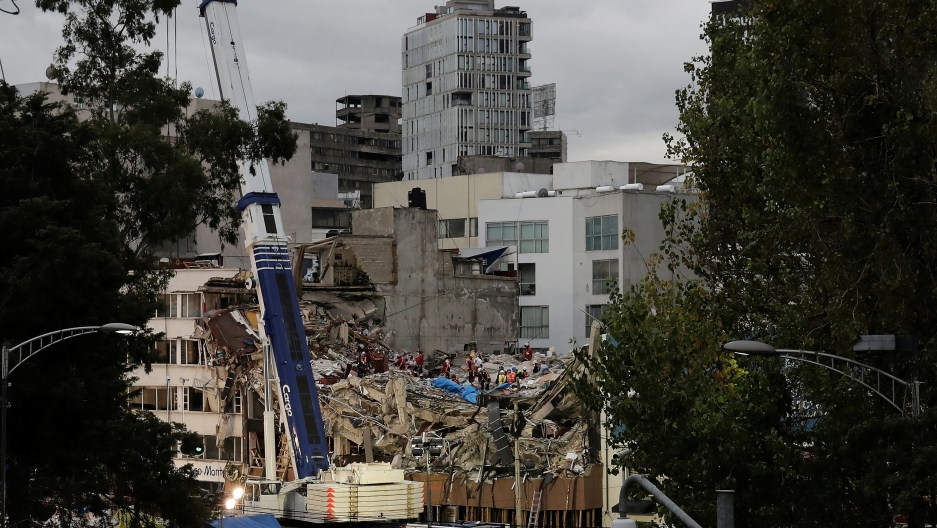 A rescue team works to remove bodies trapped under the rubble of a collapsed building in Mexico City's Condesa neighborhood after an earthquake struck Mexico City the afternoon of Sept. 19.

One month ago, on the afternoon of Sept. 19, a massive quake struck Mexico City and surrounding areas. That day, The World's Monica Campbell was in the Boston newsroom, far from her home and family in Mexico City. She watched footage of buildings collapse and waited as death tolls rose.

That time, at least 10,000 people died. Fewer people died this time — 369 people confirmed dead. And fewer buildings collapsed. Some say it was because the recent quake was weaker and that buildings codes have improved over the years. Or, maybe it was just plain luck.

When Campbell returned to her home in Mexico City, she arrived to chaos. People were trying their best to rebuild or they were leaving altogether. Her neighborhood in particular was among the hardest hit. Campbell's building was evacuated.
"Walls had fallen. There were holes and big cracks from floor to ceiling," she recounts.
Since the destruction of the quake, Campbell has been seeking answers to questions a lot of people in the city have been asking. But namely, how can you live safely in an earthquake-prone area?
To listen to Monica Campbell's full report of what she found when she returned, listen above.