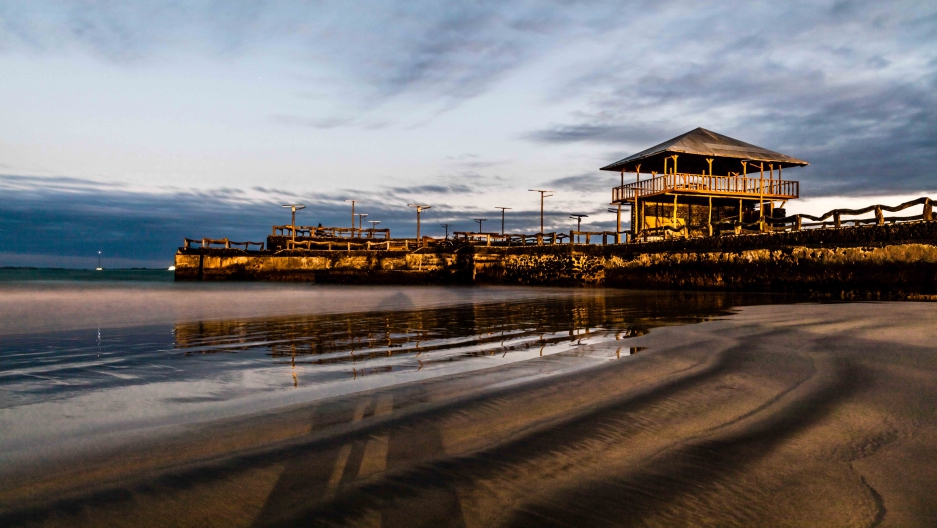 The main pier at Isabela Island, the largest of the Galápagos Islands, is shown here. In recent years, more tourists are visiting Isabela Island, which is famous for its sandy streets, pink flamingos and active volcanoes.

Mathías Espinoza has a deeply crinkled brow as he squints at the vast ocean around the Galápagos Islands on a July morning. “Bien brava,” he murmurs softly, meaning, “rough.” He has looked out on the ocean many times over his years in the Galápagos Islands, but it never ceases to intrigue him.

Espinoza is inhaling the crisp morning air slowly and deliberately. The small speedboat that is tied to the dock right behind him batters noisily against the wooden palings with force. Shortly, this boat will take a handful of international divers out to a spot where they will descend to see the marine creature Espinoza knows better than any other guide: hammerhead sharks.

The ferocity of the ocean (and its inhabitants) isn’t concerning to Espinoza. He knows the divers are in for a rare treat: He's taking them to an area called Gordon Rocks, where they will dive through a uniquely Galápagos underwater wildlife habitat, a tuff cone.

“A tuff cone is a sediment of ashes that, because of a strong [volcanic] eruption, those ashes went up into the sky and they settled down in the form of a cone,” he tells the divers before they board the boat.

Yet, Espinoza is acutely aware of how precarious and delicate areas like Gordon Rocks are, and that one day they might not exist, especially if human traffic coming to see them puts stress on the ecosystem.

“The question on this very fragile ecosystem is, how you can do tourism in the long term that’s not going to affect the wildlife here,” says Espinoza.

So, he guides the divers to not cause harm to the underwater world. He’s at the forefront of a movement in the Galápagos Islands to manage the tourist influx in a way that respects and protects the environment — a concept called “sustainable tourism.” It’s an idea that has gained currency in some countries where tourism is the base of the economy, yet where tourist traffic might also be causing degradation of the very sites people come to see.

And while Espinoza’s tours might be the model for putting as little stress on the ecosystem as possible, he is also worried about a different threat that comes from the tourism influx — what could sail in on cargo ships that bring supplies to the hotels and tour boats.

“With the cargo ships, you can have insects that are hurting the ecosystems, from introduced ants to introduced flies,” says Espinoza. “Small animals, they are big problems.”

The Philornis downsi fly attacking the famous finch bird might be the starkest example of these introduced insects damaging the Galápagos ecosystem, according to Espinoza.

“The [Philornis downsi] females are laying their eggs in the nests of the finches, and then those eggs are turning into larvae and those larvae are attacking the small finches. They’re sucking their blood,” Espinoza says. “Some species of finches are suffering a mortality of 90 percent.” 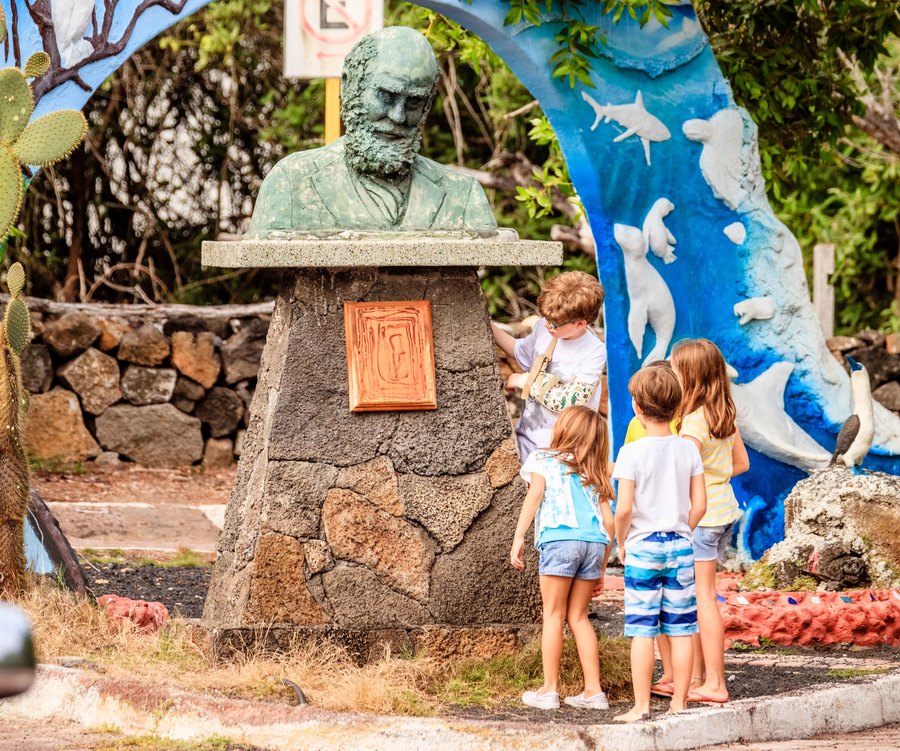 Children on Charles Darwin Avenue in Santa Cruz, the main tourist drag in the Galapagos Islands.

So, the Ecuadorian government has gotten very strict. What can be brought on and off the islands, and even between islands, is vigilantly monitored. So, too, is the people flow from mainland Ecuador.

“Since I've been here, I’ve seen a lot of changes in the local community just within 16 years,” says Stuart Banks, an oceanographer with Conservation International. While the local population has grown over the years to be just under 30,000, the number of tourists each year dwarfs that. Last year, over 200,000 foreigners visited.

Yet, due to national park protections, much of the islands are not open for anyone to live on or freely visit. This cuts down the human traffic considerably.

“Luckily, because of steps that have been taken in the development of the island, in protecting the national park in the Galápagos, the great part of the natural ecosystems is still pretty much as it was 200 years ago, before all this rapid development.” 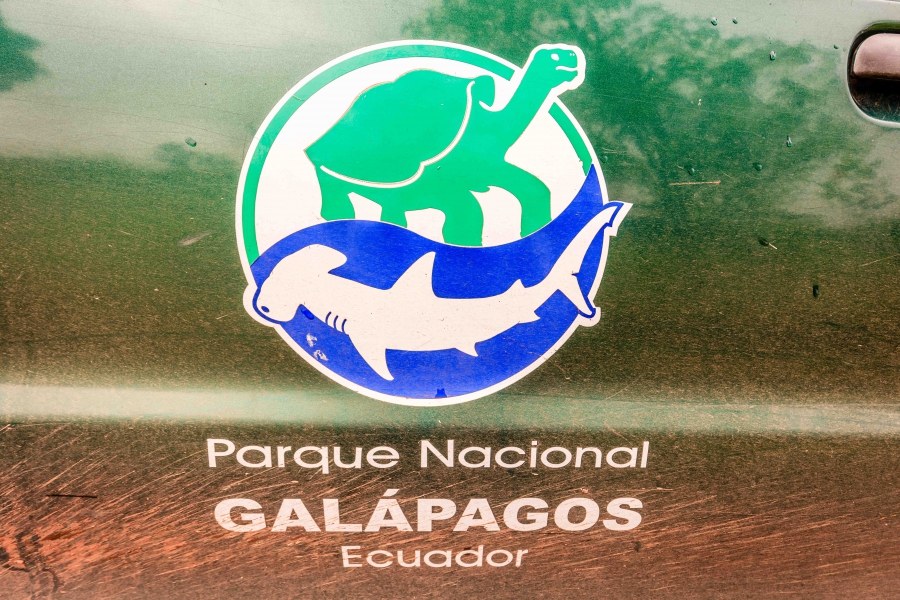 Much of the islands are a UNESCO World Heritage site, and 97 percent of the islands are protected national parklands where no one can live or build. While tourists can visit some of these areas with a certified guide, human traffic on much of the Galápagos islands is minimal, helping with the preservation.

This keeps the boundaries of tourism very manageable, according to Jonathan Romero, a Galápagos National Park veteran who is currently based on the largest of the Galápagos Islands, Isabela.

“The most important thing is to protect our island’s biodiversity,” he says. “But there are external threats — like bad tourist behaviors — that affect us quite severely.”

Romero says that while conservation is a way of life for many locals, some tourists don’t know how to minimize their impact by being frugal with electricity, water and plastics. Many don’t know national park rules. And in this wildlife wonderland, where animals are all around and largely unafraid of humans, tourists seem to routinely break one key rule — they cannot go within six feet of the wildlife.

“There was just a girl who isn’t from here, who climbed on the back of a tortoise and put this photo of herself on the tortoise on her social media networks,” Romero says. “Locals were upset and posted strong rebukes of her.” She apologized.

Selfies with famous Galápagos creatures might not matter hugely if it was just an odd person here or there. But, Romero says in a world of instant photo sharing, the stress on animals from all of these selfies can add up.

On the Isabela beachfront, despite the sandy streets, tourism infrastructure has developed as more foreigners come to see the volcanoes, pink flamingos and marine turtles.

Ramón Martínez runs a small, beachfront hotel in a corner spot close to mangroves and rock pools. He and his wife started this hotel back when the shoreline was barely developed. He says it's often hard to meet all the demands of tourists.

“There’s a list of things that are restricted, that can’t be brought to the islands,” explains Martínez. It is hard when his guests want certain types of meats or fruits, and they don’t understand why he can’t get them.

Martínez  has also learned tourists have needs that locals have learned to live without — like hot showers multiple times a day. So, he came up with an environmentally friendly solution. “I installed solar panels to help with heating hot water,” he says. 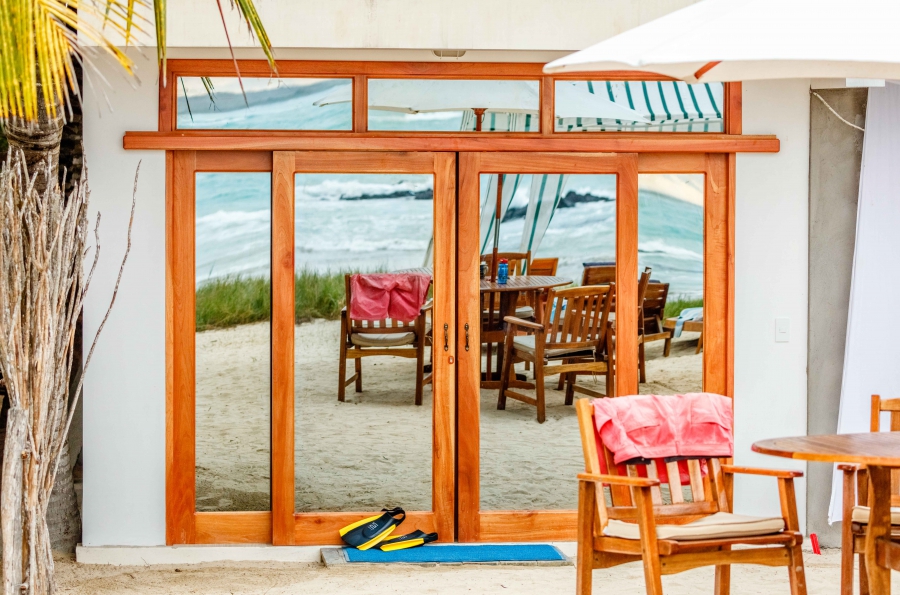 The Isabela Beach House is owned by Ramon Martinez and it was one of the first small hotels to pop up on the shoreline of Isabela Island.

So far, Isabela Island does not have big chain hotel-resorts that other beach destinations are full of. Martínez says that if big hotel chains were to set up shop on Isabela, they would have to find a way to meet a traveler's every little need, and he worries that the big hotels wouldn’t respect the environment. But he says locals have resisted moves by big tourism to enter Isabela.

“Locals here see their island as their patrimony — something they must protect and respect,” says Martínez. “Their island is not for sale.”