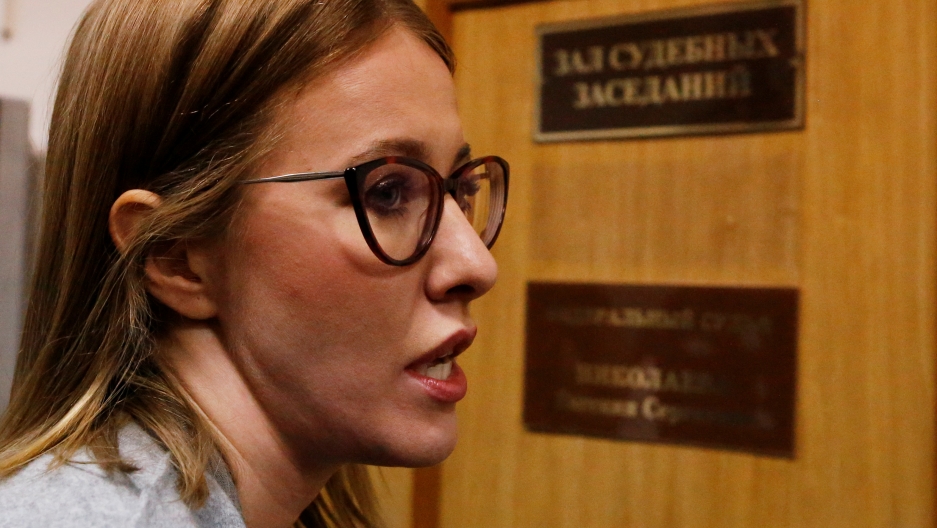 Russian TV personality Ksenia Sobchak has announced her candidacy for the Russian presidency, but observers say her bid is likely backed by the Kremlin.

A Russian socialite-turned-liberal journalist stunned many six years ago when she joined mass protests against Vladimir Putin.

A glamourous, wealthy TV personality with multiple projects to her name, she said she risked a lot by joining anti-Kremlin rallies.

"My name is Ksenia Sobchak and I have something to lose," the daughter of the late Saint Petersburg mayor Anatoly Sobchak, who mentored Putin, said to boos from the crowd at the 2011 Moscow rally.

Now the 35-year-old former host of a television reality show has stunned Russians again by declaring her bid to run in a March presidential election widely expected to extend Putin's rule to 2024.

"My name is Ksenia Sobchak. I am standing for president," she wrote in a letter released to announce her campaign on Wednesday.

Political observers and media suggested her Kremlin bid was designed by Putin's team to rekindle public interest in the election amid widespread political ennui and inject a note of glamour into a campaign devoid of genuine political competition.

"This is an attempt to artificially create an attractive liberal candidate," he told AFP.

Navalny, who shot to prominence by organising huge protests against Putin in 2011 and 2012, has also announced his intention to run and has over past months sought to rally supporters around the country in a Western-style campaign.

But officials say he is not eligible to run because he is serving a suspended sentence for fraud.

Navalny, who is serving a 20-day term in jail on charges of repeatedly violating a law on organizing rallies, has yet to comment after Sobchak's announcement.

But the Yale-educated lawyer said in September, when speculation that Sobchak would stand for president began circulating, that her bid was a "rather disgusting Kremlin game," accusing it of dragging "this liberal laughing stock into the polls to divert attention."

Analysts said Sobchak's candidacy is a political spoiler designed to create the semblance of a competitive election and offer a token candidate to opposition voters who would rather vote for Navalny.

Sobchak has in recent years sought to refashion herself as a liberal political journalist, but gained fame by presenting a popular reality show called "Dom-2," where contestants have to form romantic relationships.

"Ksenia Sobchak will take part in a show called 'The Presidential Election'," blared the banner headline of the mass-circulation Moskovsky Komsomolets newspaper. "Circuses for the masses are guaranteed — although the people would rather have bread."

RBK business daily caustically called her "an opponent from 'Dom-2.'"

Sobchak said she had met Putin shortly before announcing her bid and told him of her intentions. She declared that her campaign slogan was "I am the candidate 'against all.'"

Russian elections used to allow voters to tick a box titled "against all" to reject all candidates.

Many Russians derided Sobchak's move, saying the poll — which is expected to see the participation of usual suspects like the veteran leader of Russia's Communist Party Gennady Zyuganov — was becoming ever more farcical.

Others said it was hard to take the announcement seriously.

"If this is Operation Successor, then it's a bold move," quipped Vadim Volkov, a 39-year-old manager.

"It is hard to speak about this without a smile," he told AFP.

Sobchak, whose net worth is estimated by Forbes' Russian edition to be $2.1 million, is planning to recruit Vitali Shkliarov, a Russian who campaigned for Bernie Sanders in 2016 in the United States, reported TV Dozhd, where Sobchak is a presenter.

Sobchak's campaign budget is estimated at some $17 million, reported the Bell, a daily newsletter founded by prominent Russian journalist Elizaveta Osetinskaya, citing a source close to Sobchak. The idea of having a campaign whose main players are Putin and Sobchak with Navalny banned, "is no doubt a bold bright idea from Sergei Kiriyenko's team," said political observer Kirill Rogov, referring to the Kremlin's first deputy chief of staff.

"There will be no elections but there will be enough hype, squabbles and creativity to keep people glued to the screens."