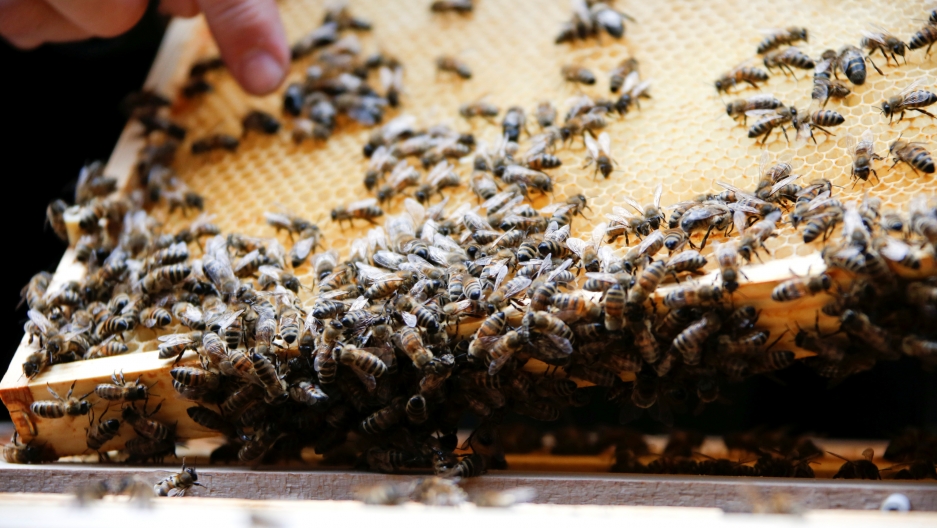 A beehive frame with honeycomb and honeybees is seen during the presentation to the media of tens of thousands honeybees permanently placed in a courtyard of a lower house of the German parliament Bundestag office building in Berlin, Germany, April 25, 2016.

Flying insect populations dropped by more than 75 percent during the last three decades in dozens of protected areas across Germany, researchers have found.

A club of mostly amateur entomologists used traps to capture insects and measure their biomass at 63 nature protection areas in Germany since 1989.

“It’s not just one species, it seems there’s basically a kind of wholesale collapse of wild insects,” says Dave Goulson, a co-author of a study published in the online journal PLoS ONE on Wednesday.

The study did not pinpoint a reason for the precipitous drop, but Goulson notes that many nature preserves are surrounded by agricultural lands.

“I think it’s likely [that] it’s how the surrounding land is being managed, because the nature reserves themselves haven’t really changed, but the surrounding landscape is full of these big monoculture crops treated with lots of insecticides,” says Goulson, a biology professor at the University of Sussex in Brighton, UK. “We’ve turned a huge proportion of the surface of the world into a fairly bleak and inhospitable place for life other than the crop.”

Insects may often seem a nuisance to humans, but they’re vital pollinators and food sources for species higher on the food chain.

An estimated 80 percent of wild plants species are pollinated by insects, and more than half of birds rely on insects as a food sources, according to the study.

“If we were to lose the insects, we would lose most of our crops, we would lose all the flowers from the countryside, and we’d lose most of the bird life, the mammal life, and so on,” Goulson told The World in an interview. “So essentially we’re talking about complete catastrophe for life on Earth.”

The study found that the decline in insects occurred regardless of habitat type, and changes in weather patterns, land use and habitat don’t explain the overall decline.

Hans de Kroon of Radboud University in the Netherlands, who supervised the research, suggested reducing the use of pesticides, expanding nature reserves and developing good monitoring programs as ways to exercise “the utmost caution” in an effort to protect insect populations.

A researcher who is unconnected to the study, Lynn Dicks from the University of East Anglia in the UK, told the BBC that the study provides new evidence for "an alarming decline" that many entomologists have suspected for some time.

"If total flying insect biomass is genuinely declining at this rate [about 6 percent per year], it is extremely concerning," she said.

“I hope this is sufficiently dramatic that people will sit up and listen, and realize that actually we are doing irrevocable damage to the Earth’s environment,” Goulson says.