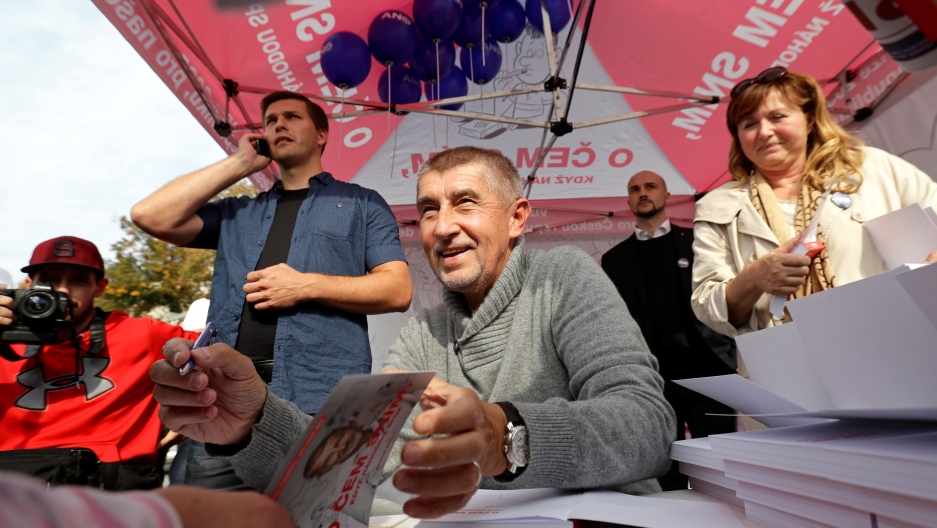 The leader of ANO party Andrej Babis signs books for a supporter during an election campaign rally in Prague, Czech Republic Sept. 28, 2017.
Credit:

Dubbed the "Czech version of Trump" by Forbes, the wiry, gray-haired, Slovak-born farming, media and chemicals mogul is the Czech Republic's second-richest man.

Andrej Babis set up the populist ANO (Yes) party in 2011 as a political outsider determined to lure voters with promises of clean politics in the EU country of 10.6 million ranked more corrupt than Botswana by Transparency International.

ANO entered parliament two years later, but Babis himself has since been dogged by allegations of wrongdoing, something he flatly denies.

Days ahead of the vote, the 63-year-old was still hammering home his "now or never" mantra, insisting that the ballot is a last chance for voters to get rid of "the treacherous hydra of corruption choking this country" by handing him power.

He is also reaching out to Eurosceptic voters with a letter vowing that "the Czech Republic will not adopt the euro" should he take office and that he wants "a single Europe which plays fair and where nobody is a second-class member."

Babis also echoes other eastern EU leaders — especially in Hungary and Poland — who oppose mandatory refugee quotas and various rules they see as attempts by Brussels to limit national sovereignty.

Given his country's heavy reliance on the EU both in terms of trade and subsidies, Babis has ruled out "Czexit" but does want changes to the bloc's rules on free movement of capital, goods, labor and services.

ANO has spent the last four years in a rocky coalition with the Social Democrats and the centrist Christian Democrats.

A string of scandals has failed to dent Babis's popularity, with voter support for ANO even surging as he sticks to his promise to fight corruption in public life and "manage the state like a family business."

But pundits have slammed him for extending tax benefits on biofuels, benefitting Agrofert, the Czech Republic's largest trading conglomerate, which he ran before stepping aside to become finance minister in 2014.

In May, Babis was ousted from that post after leaked recordings showed he had influenced reporters working for newspapers he owns, something he had vowed never to do.

Earlier this month, he was charged with fraud and harming the EU's financial interests over a 2 million euro ($2.35 million) subsidy for small companies paid to his Stork Nest farm in 2007.

Babis insists the indictment is trumped up to derail his victory the polls.

Babis of being a suspected secret police agent during the Communist era in the former Czechoslovakia.

"There is no evidence, I didn't sign anything, I didn't collaborate with the secret police," Babis said after the constitutional court returned the case to a lower court.

An ex-Communist who serves up doughnuts to woo voters, Babis has a net worth of $4.1 billion (3.48 billion euros) according to the 2017 Forbes list of global billionaires, making him richer than US President Donald Trump, who is worth $3.1 billion (2.63 billion euros) on the same list.

Thanks to a father who he claims he "co-founded foreign trade in Slovakia" under communism, Babis grew up on the road, attending elementary school in Paris and high school in Geneva.

His work ethic and knack for making money came young.

"I worked since age 15, delivered milk, unloaded parcels at the station, did decorating, built weekend houses, all to make money," he once said.

After earning an economics degree, he followed in his father's footsteps and worked as a sales representative in Morocco in 1985 to 1991.

After the Velvet Revolution toppled totalitarian rule in 1989, Babis returned home to see his country split into two states and to find himself jobless.

Born on September 2, 1954 in Bratislava, Babis lives with his second wife Monika, 20 years his junior and mother of two of his children, whom he married at the controversial Stork Nest farm in the summer.

The former tennis and volleyball player also has two children with his ex-wife.

"I'm a wealthy man. I have made almost all of my dreams come true. I have earned billions with honest work," he once said.