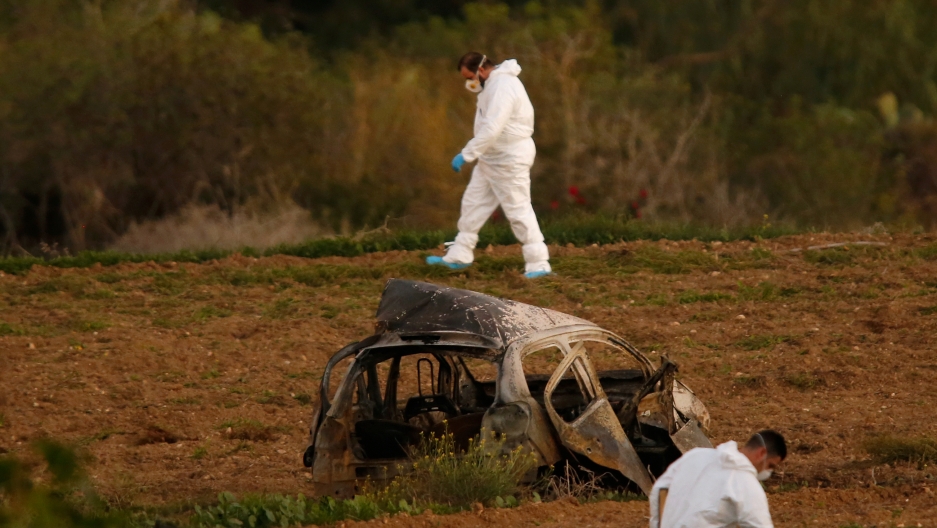 Forensic experts walk in a field after a powerful bomb blew up a car and killed investigative journalist Daphne Caruana Galizia in Bidnija, Malta.

A Maltese journalist once described as a “one-woman WikiLeaks” was killed in a car bomb this week.

Daphne Caruana Galizia was perhaps the most famous journalist in Malta, known for her fearless reporting on crime and corruption that reached into the upper echelons of the government.

Most recently, she was focusing on revelations from the Panama Papers, which connected the dots between offshore companies linked to Malta’s prime minister and two of his closest aides. The three men were linked to the sale of Maltese passports and payments from the government of Azerbaijan.

Barely 30 minues before she was killed, Caruana Galizia published a post on her widely-read blog about a government official, writing “there are crooks everywhere you look now. The situation is desperate.”

“I think that a lot of people hope that this will be the trigger that leads to some kind of reform and some kind of progress, and that justice will be done.”

But Caruana Galizia’s family and others in Malta have expressed a lack of confidence that the investigation into her death will be carried out reliably.

Her son Matthew is also an investigative journalist. “[Matthew] basically describes a state where the rule of law is under threat, where the institutions of civil society don't work, where nobody can be sure of the justice,” says Henley, who spoke to him earlier today.

Matthew Caruana Galizia’s disillusionment was also clear in a moving Facebook post he wrote soon after his mother’s death. “This is what happens when the institutions of the state are incapacitated: the last person left standing is often a journalist. Which makes her the first person left dead.”

You can hear The World's full interview with The Guardian's Jon Henley above.