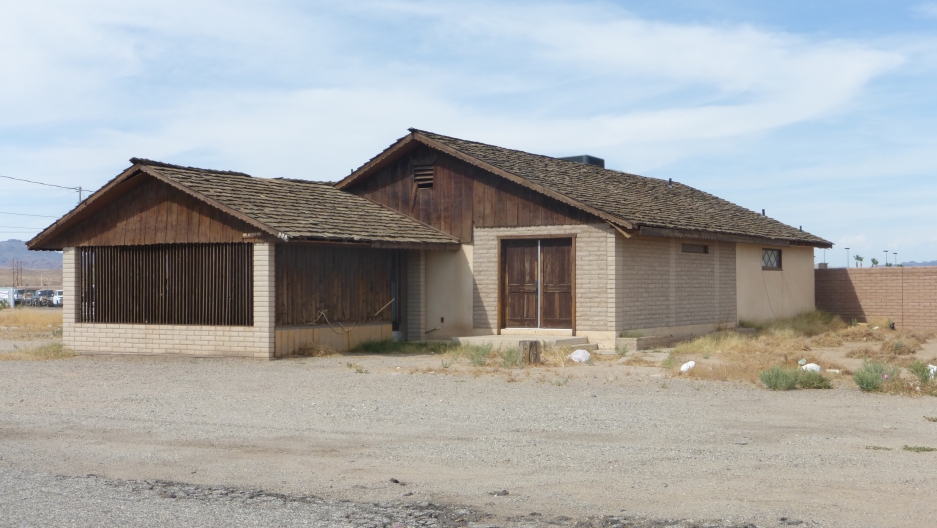 Former WWII barracks turned into a house in the nearby town of Parker, Arizona.

Usually, when we talk about Japanese prison camps during World War II, the story centers around Japanese Americans. But there was actually another group whose story intertwines with the Japanese Americans' during the war.

Those barracks were at the Colorado River Relocation Center, which is known as the Poston internment camp.

In 1865, the US government established the Colorado River Indian Reservation in Arizona. The population was small, the land mostly desert. And for years the government wanted to irrigate the land to make the reservation more self-sufficient. The idea was that after irrigating, the government would then bring in more Native Americans.

In the 1920s and 30s, a tense battle over water rights to the Colorado River (especially between California and Arizona) made irrigation more pressing. The reservation received a large water allocation, which the Federal Office of Indian Affairs (OIA) feared they might lose if they didn't prove that they were using that water. 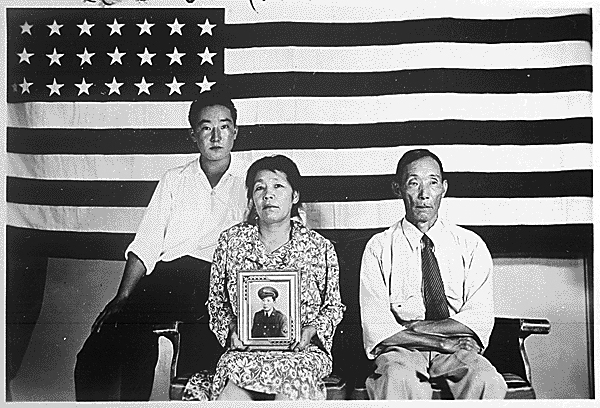 The Hirano family (left to right): George, Hisa and Yasbej at the Colordado River Relocation Center in Poston, Arizona, 1942-1945.

Ron Moore, who used to be a planner for the Colorado River Indian Tribes, explains that the OIA was trying to figure out how to save the tribe’s water allocation and says, “the only way they [the OIA] could see that they would be able to do that, would be to create enough irrigated farmlands to justify them keeping their water allocation.”

But to build an irrigation system, they needed money.

So when the government decided to lock Japanese Americans in prison camps during World War II, the head of Indian Affairs saw an opportunity. He offered the reservation as a site, provided they receive money to expand the roads, build a canal system and extend the power infrastructure.

For the OIA, the internment camp was a play for much-needed resources.

Ruth Okimoto was 6 years old when she and her family were forced from their home in San Diego and sent to the Poston camp.

She says, “There were six of us with a baby that was just a few weeks old when we moved into this 10-by-20 room.”

That room was their entire home during their time at Poston.

Dust blew in the thinly constructed barracks. Temperatures could get up to 120 degrees. And barbed wire fences surrounded them.

Internees did what they could to make life better for themselves. Okimoto’s dad, like others, built a garden to grow vegetables. Okimoto also recalls that he built a fish pond. She laughs as she says, “I remember thinking, My God, a fish pond! Anyway, I don't know where he got the concrete, but we had goldfish in Poston!"

That concrete was also being used elsewhere on the reservation to build roads and irrigation canals with the help of Japanese American labor.

Unlike other internment camps, Poston and the one other camp in Arizona were overseen by both the War Relocation Authority and the Office of Indian Affairs.

Many of the detainees at Poston had no idea they were on a reservation. But there were some interactions. Years later Okimoto went back and did research on the camp and she met a Native American man who told her that he and his friends “would go down to the camps and challenge the Japanese American boys to basketball games.”

And there were other interactions.

As he shows me around the site of the former camp, David Harper, the historic preservation officer for the Colorado River Indian Tribes, tells me that there was a market of sorts. The prisoners would take the vegetables they grew and, “Mohave people would get rabbit or a deer and they would trade at the camp gates at night. When nobody knew.” 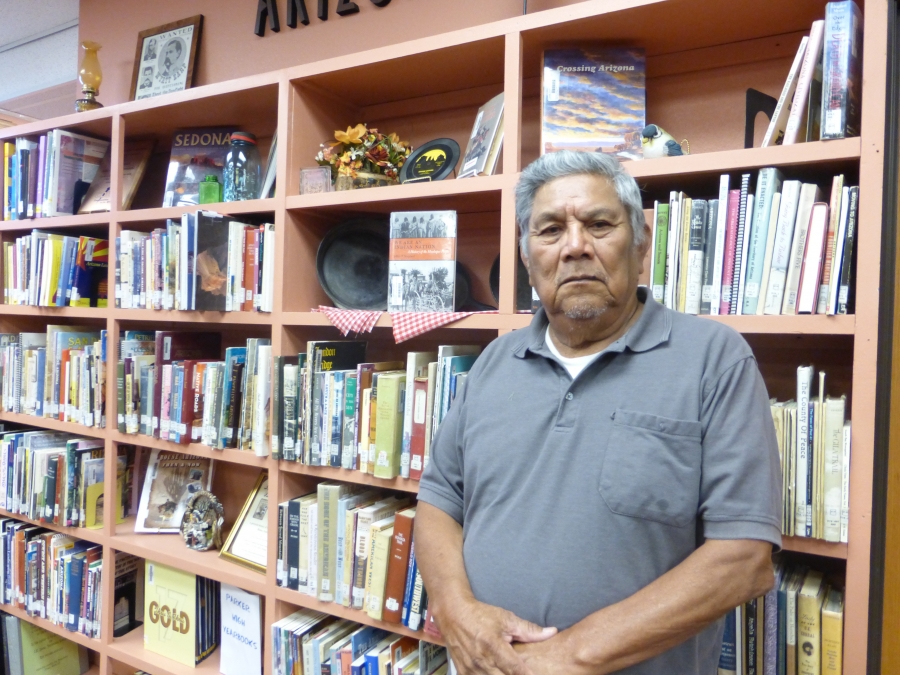 But the story of the Poston camp doesn’t end there. For a brief period, the US government did establish a “colonization program,” where they brought other Native Americans onto the reservation. Like Ron Moore’s family, “colonists” were promised land for farming and a house — houses that were really just former camp barracks.

And as the government intended, other buildings at Poston were also turned over to the Native Americans. David Harper, the preservation officer, fondly remembers the gym. “It had rafters like the Boston Garden. And it was creaky and creepy and all the elements of darn good place to play ball.”

A fire later made most of the buildings unusable. But today, there’s a new school building on the site of the former prison camp.  If you drive around the area, you can see former barracks that were turned into houses — and are still being used. And the area around Poston, the reservation, has become really lush farmland, thanks to the irrigation system that took shape during the war years.

In 1942, the Colorado River Tribal Council objected to Poston being built on their land. But they had no power to stop it. Some say that the council had not wanted another group to face injustice. But Harper says it was more complicated than simply that.

“The only thing the tribe agreed to was to help build the infrastructure of the shacks they lived in. I say a shack, but it was a lot better than what the tribes were living in. So the tribes were upset that they would house these people … and give X amount of money to house them yet we live substandard.”

Harper says you have to understand what it was like for the tribes at the end of the Depression, a time when they had almost nothing. 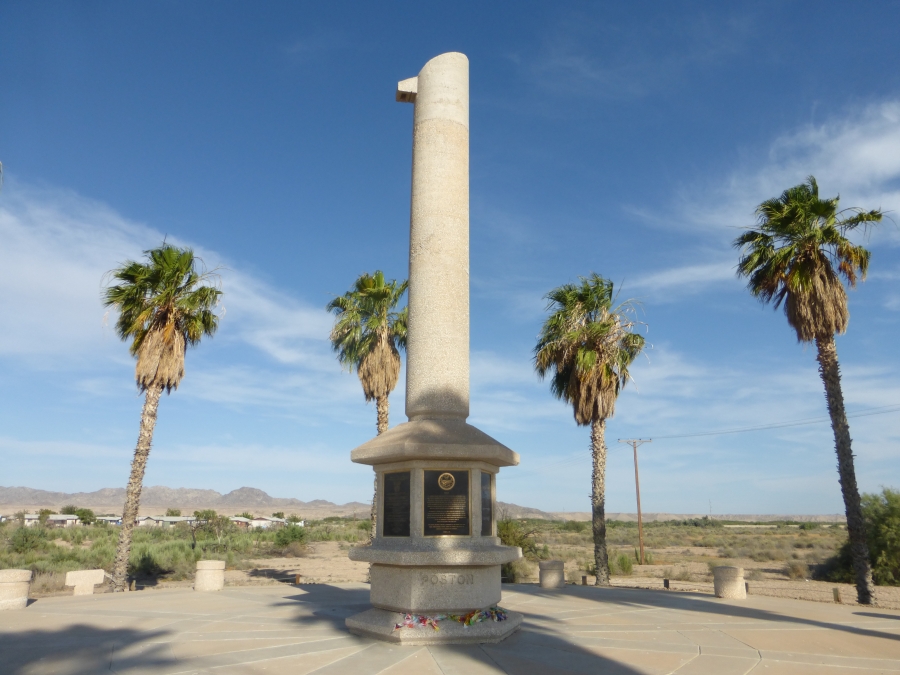 After she finished her research, Okimoto published an article about Poston. In it, she writes that “For a brief moment in history, the Japanese American detainees experienced what the American Indians have endured for centuries.” She says the Poston camp was really an internment camp inside another internment camp.

In 1988, the Colorado River Indian Tribes gave former Poston prisoners land for a memorial and today descendants of both groups are working to maintain remaining camp buildings.

Harper says, “This is a historic thing that happened on our tribe and we want to preserve it for our children.

So that they and everyone in this country remember what happened here, and he explains, so no one repeats anything like it ever again.