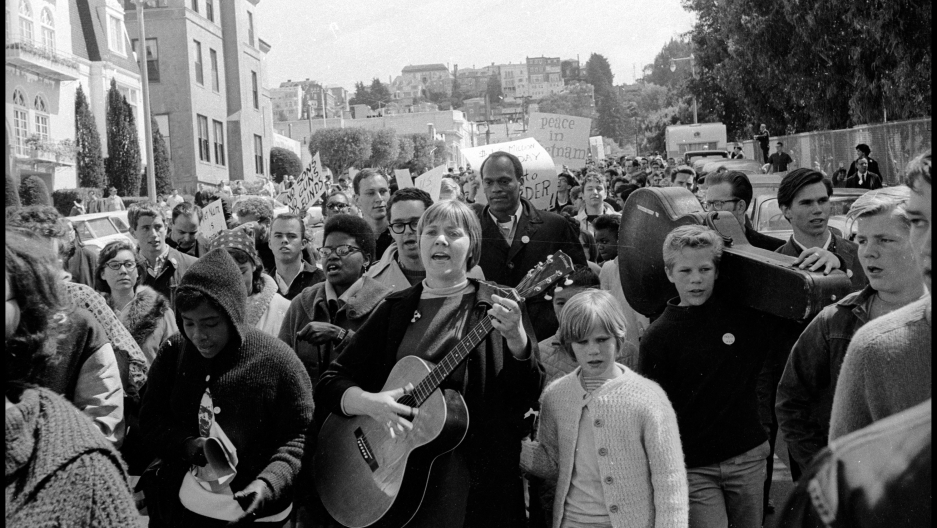 Barbara Dane singing at a Vietnam War protest in 1964.

"Can you recall any good fascist songs?" Barbara Dane, the founder of Paredon Records, asks.

Unlike fascist music, Dane recalls protest and struggle songs as having a rallying effect. Songs like "Deutschlandlied," which was chosen as Germany's national anthem in 1922 (today only the third stanza is used in the national anthem), can be pointed out as nationally successful. But fascist songs just don't seem to bring people together the way that protest music from folk culture does.

Still, it can be difficult to come across the folk culture that Dane experienced in the 20th century. Some feel that protest music today isn't what it used to be. For Dane, the genre hasn't really gone anywhere — it's just a matter of a good search.

From music to speeches, Paredon Records spanned the globe bringing voices from people in Cuba, Puerto Rico, Ireland, Palestine, Italy, Thailand and many other places. Dane introduced songs of struggle, which sparked more than lingering emotions. She said that Paredon Records produces the “music of the people” and, contrary to what some may think, it's “not just some poetic device.”

Both Silbur and Dane were committed to social change and were able to find voices that were out of the reach of large audiences or silenced by their own governments. They were radicals for the time and were committed to using music to connect larger audiences in the United States to different groups' struggles.

Dane was fascinated by cultures outside of her own, and she worked to educate others about them, as well.

Each record was accompanied by a booklet of information about the relevant political movement and other struggles being described in the music and speeches. Dane called them “a little graduate study,” to provide context for American audiences that may have been apathetic or isolated from global news. Dane’s earlier involvement in anti-war demonstrations, a childhood wrapped in Detroit segregation and a desire to give voice and rhythm to stories about people inspired her to begin the label — and even to end it.

When it started to become "a real business," she explains, it was time to transition back to production and activism.

Barbara Dane is celebrating her 90th birthday with a concert at UCLA’s Royce Hall on Oct. 21. To hear more about Paredon Records and Dane, listen to the full interview above.