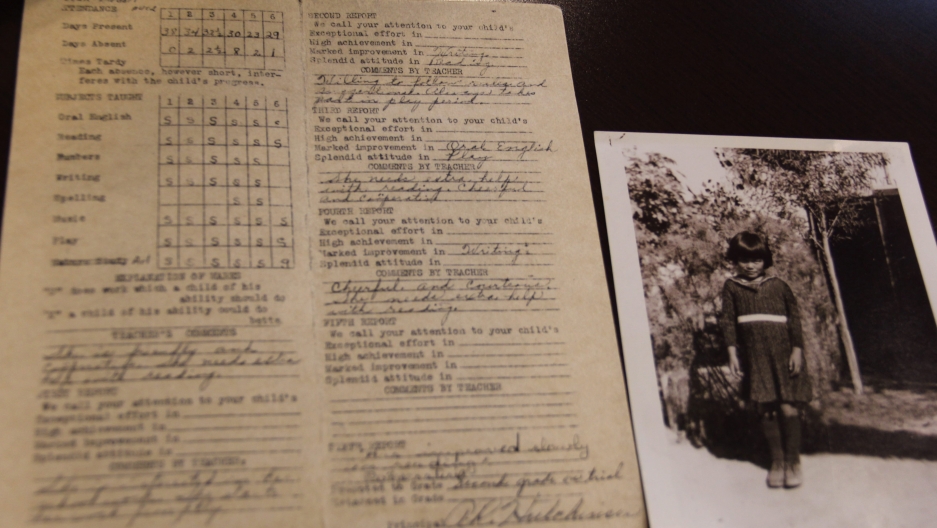 Jean Mishima, 81, of the Chicago Japanese American History Society, saved her grade school report card from her childhood while imprisoned at a camp at Tule Lake, Arizona during World War II.

It’s been 10 years since Anna Takada was in sixth grade, but she still remembers her history class. The World War II imprisonment of her grandfather and nearly 120,000 others with Japanese heritage merited only a few lines in her textbook. And at school, her teacher skipped over those lines.

“I remember being shocked and hurt how it was glossed over,” Takada, 25, says.

At home, her father, who was born in Chicago where his family resettled after incarceration, told Takada not to ask her grandfather about that time in their family’s history, either. And she didn't.

For the past few months, however, Takada has asked as many Japanese Americans as she can to share memories of their experiences inside the camps. Takada and other Japanese Americans in Chicago created an exhibition called “Then They Came for Me: Incarceration of Japanese Americans during WWII and the Demise of Civil Liberties.” It opened in late July and runs until mid-November at the Alphawood Gallery in the Lincoln Park neighborhood.

One by one, elderly Japanese American Chicagoans spill their long-buried hurt in front of the camera inside Takada’s booth. They are outraged by President Donald Trump’s so-called “Travel Ban 3.0,” which prohibits immigration from several majority-Muslim countries. Now, as during World War II, they say an order from the nation’s highest office is branding a particular group of Americans as adversaries.

On Feb. 19, 1942, roughly two months after the bombing of Pearl Harbor by the Japanese navy, President Franklin D. Roosevelt signed Executive Order 9066, forcing the relocation of all Americans and immigrants of Japanese ancestry up and down the West Coast into concentration camps in communities from Arizona to Arkansas.

Labelled enemy aliens, Japanese American were imprisoned for four years. Upon their release, many felt they couldn’t go home again. Anti-Japanese sentiments on the West Coast did not fade with the war’s end. The federal War Relocation Authority, which oversaw the camps, resettled thousands of people in Chicago. Almost overnight, the city’s ethnic Japanese population blossomed from 400 mostly international students to 20,000. It became one of the largest communities of former inmates in the Midwest. Soon enough, grocery stores, beauty salons and kimono shops sprang up near Wrigley Field in the Lakeview neighborhood.

Some sought help from the Japanese American Service Committee to ease the transition from the destitution of being incarcerated to life in a strange city. The midwestern chapter of the Japanese American Citizens League opened its doors to aid those seeking to fight for their naturalization and other civil rights.

Still, many rose out of the incarceration trauma determined to keep their head down and blend in. They fanned across the city’s neighborhoods and then into the suburbs. By the late 1980s, the Japantown by the stadium was no more.

Takada’s work and the exhibit she helped create represents the community coming back together, in a way. It’s largely anchored by photographs taken by Ansel Adams and Dorothea Lange of life in the camps, but it’s made intimate and local with nearly 100 personal items.

An alien registration card, a luggage tag, family portraits — all handpicked from the Citizens League’s collection of artifacts and put on view for the first time. Thanks to the collection and the availability of the camp images through the National Archives, gallery staff and volunteers put together the exhibit, which they say is the largest ever on this subject matter in the Midwest, in just three months.

“We realized how timely it would be to develop the exhibit and speak to this political moment,” says Ryan Masaaki Yokota, manager of the Japanese American Service Committee’s collection. He helped curate the exhibit.

“No one should be persecuted based on race, religion or national origin. We’re trying to draw linkages between the Muslim ban and the Asian communities [in World War II].”

A War Relocation Authority center housed 10,000 evacuees of Japanese ancestry in Owens Valley between the High Sierras and Mount Whitney, the highest peak in the US. They were incarcerated in the mid 1940s. A wide fire-break between blocks of barracks also served as a playfield.

Many grandchildren of Japanese immigrants, sansei like Takada and Yokota, have made the pilgrimage to the Manzanar camp site, captured by Lange as a row of shacks at the dust-stirred Sierra Nevada foothills. The Citizens League has kept this generation politically engaged.

However, indifference also has crept in. Jean Mishima started grade school inside the Tule Lake, Arizona, camp and kept her report card to this day. But she says her grown sons would rather not hear about her experiences.

Mishima and other inmates stepped up to testify at congressional hearings during the 1980s. All this culminated in the Civil Liberties Act signed into law by President Ronald Reagan, which resulted in an apology and $20,000 for each person who was detained.

Even with apologies and amends made, Yokota says Japanese Americans have continued to harness this history.

“The awareness has served as an impetus for us to deal with issues related to civil and human rights and to support other civil rights struggles,” he says.

That’s why Takada keeps going too.

“We are lucky now to us this is history, but we need to act in solidarity with other groups,” she says. “I feel a stake in making sure the stories wouldn’t be lost.”