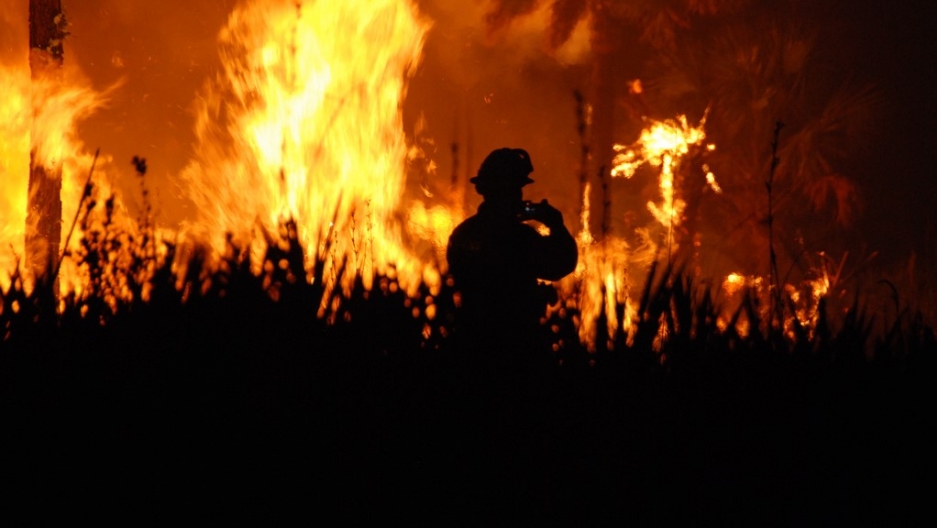 A wildfire blazes at Florida Panther National Wildlife Refuge in southwestern Florida in 2009.

In the United States, this year’s wildfire season has been wild, to say the least. Roughly 50,000 fires have scorched more than 8.5 million acres across the country, hitting the Pacific Northwest, California and Montana particularly hard.

Occasional fires are important for the cycles of many ecosystems, but this year’s heavy fire season shows the mark of human influence. Jennifer Balch, director of Earth Lab and an assistant professor of geography at the University of Colorado, explains that scientists have long known there’s a strong link between a warmer climate and wildfires.

“We can even parse out that contribution and say that effectively, climate change and human-caused climate change have made fuels 50 percent drier,” she says, “and it’s doubled the amount of western forests that have burned since the 1980s.” She points out that California, Oregon and Montana — all deeply affected by the fires — have seen record-breaking heat or drought this summer.

But climate change isn’t the only factor behind this year’s glut of wildfires. In Oregon, the huge Eagle Creek fire near Portland was started by teenagers playing with a firecracker. Balch and her colleagues recently studied two decades’ worth of government wildfire data — 1.5 million fires in all — and found that humans caused 84 percent of wildfires.

“We effectively bring fire with us wherever we go,” she says. “We use it for debris burning. It’s part of our campfires. It’s a consequence of fireworks. We toss cigarettes out and they catch vegetation on fire.” And while lightning strikes tend to be seasonal in the western United States, “what people are doing is we’re effectively creating a year-round fire season,” she says, “where we’re coupling the ignition availability and the spark that starts those fires with a warmer and extended fire season.”

Humans also tend to start fires in unusual areas compared with lightning-strike fires, adds Hugh Safford, an adjunct professor in environmental science and policy at the University of California, Davis, and a regional ecologist with the Forest Service.

“Humans are igniting fires usually on the peripheries of urban areas, along highways, very often in canyons,” he says. “And particularly in a place like the Sierra Nevada, where most of the canyons are aligned with the general wind directions … when people start fires at the bottom of canyons, they race very quickly up into wildlands, and they can become very difficult to contain.”

So, knowing the impact that we have on wildfires, what can we do to better manage them? Compared with the early 1970s, when “a district ranger or a forest supervisor was expected to get a fire out by 10:00 a.m. the next morning,” Safford says some burning is now encouraged — and that’s the right approach.

“It’s usually called sort of a confine-and-contain process, where you might build a box in a landscape around the fire and say, if we can keep it in here and if we like the effects, we’ll just monitor this thing,” he says. “But when it becomes a problem elsewhere, they can jump on it.”

After years of fire suppression and warming climates, however, there’s a lot of fuel in America’s forests. In California alone, more than 100 million trees have died in California as a result of the drought. “And we are seeing large and very difficult-to-control fires in those systems now,” Stafford says.

Removing fuel can be part of the fire management solution in some ecosystems, he says. But it’s a massive undertaking — and from a fuel standpoint, he adds, the biggest issues are brush and little trees. “And in this country right now, there is not an economy to deal with that stuff,” he adds. “We live in the US, we don’t live in a command economy. And if a profit can’t be made off something, it’s likely not going to happen, absent a huge subsidy from somewhere.”

Balch agrees. “We can’t really address the amount of fuel that’s available and the fire problem with thinning and removing fuels alone,” she says, noting it would be a “very, very expensive process.”

“So ... we have to be really strategic about where we do treatments of fuels and how we do them,” she says. “And fundamentally, I think it’s most important where people are living and working, and protecting those areas, in terms of reducing and mitigating the potential risk for larger intense and severe wildfires, and then letting fire do the good work that it does when and where we can do it.

“Because ultimately we do live in flammable places,” she adds. “And part of our strategy has to be working with fire.”