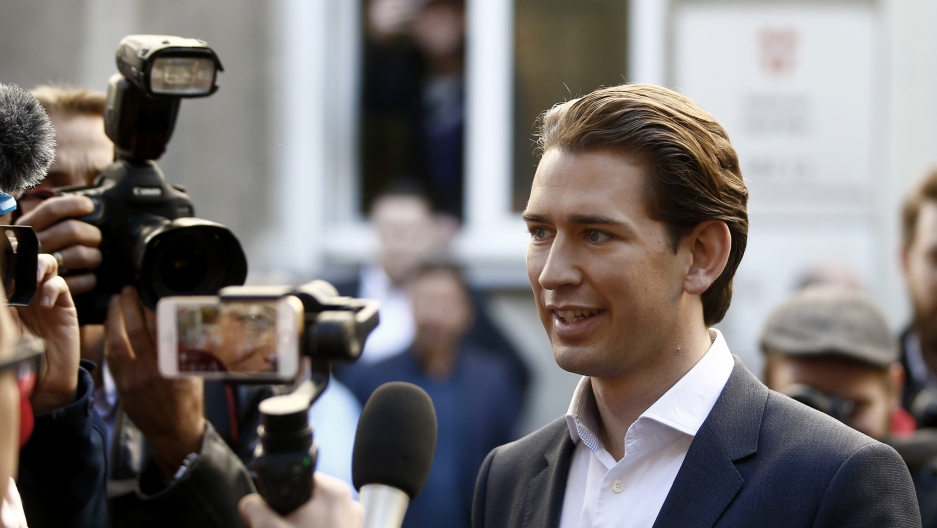 Austria's political "whiz-kid" Sebastian Kurz was on course Sunday to become Europe's youngest leader, potentially in coalition with the far-right after its best result in almost 20 years.

Close behind was the nationalist Freedom Party (FPOe) on 26.0 percent, twice that of their allies the Alternative for Germany (AfD) last month and close to its all-time record of 26.8 percent in 1999 under then-leader Joerg Haider.

Kurz, 31, nicknamed "wunderwuzzi" ("whiz-kid"), took over the OeVP in May and managed to attract supporters in droves by depicting himself as a breath of fresh air, talking tough on immigration and vowing to slash taxes and red tape.

But to form a government, Kurz will have to enter a coalition with one of the other parties.

The most likely partner is seen as the populist FPOe of Heinz-Christian Strache, 48, although this is far from guaranteed.

"We are waiting for the final result," Kurz said.

"If the president tasks me with forming a government, I will seek talks with all parties. I want change, and that requires partners."

Another option for Kurz would be a new "grand coalition" with the SPOe, but after 10 acrimonious years governing together — ended early by Kurz in May — this is seen as less likely.

An even more remote possibility in the wealthy EU member of 8.75 million people is a tie-up between the FPOe and the SPOe Social Democrats, whose campaign suffered a string of mishaps.

"We want to assume responsibility. This can be in many different forms," SPOe leader Kern said Sunday.

In December, the FPOe almost won the presidency and topped opinion polls in the midst of Europe's migrant crisis.

But since taking over the OeVP in May and re-branding it as his personal "movement," Kurz has stolen some of Strache's thunder.

As foreign minister, the Kurz claims credit for closing the Balkan migrant trail in 2016 that saw hundreds of thousands of migrants trek into western Europe.

He wants to cut benefits for all foreigners, even from the rest of the EU, reduce bureaucracy and stop the EU having too much say in national affairs — in common with Strache.

"Large parts of our manifesto have been adopted by other parties," Strache said ruefully Sunday. "That shows that we are the ones who are in the lead when it comes to issues."

The last time the FPOe entered government, in 2000 under Haider, who praised Hitler's "orderly" employment policies, Austria was ostracised in Europe.

But there would not be the same backlash now, owing to the "normalisation of the far-right in Europe since then," said expert Pepijn Bergsen at the Economist Intelligence Unit.

"There was nothing to be ashamed of as an Austrian. I have no problems with [a FPOe coalition] and I hope Brussels will see things the same way."

But the FPOe in government would still pose a fresh headache for Brussels as it struggles with Brexit and the rise of nationalists in Germany, Hungary, Poland and elsewhere.

Like AfD, French National Front chief Marine Le Pen and Geert Wilders in the Netherlands — who both congratulated Strache on Twitter on Sunday — the FPOe has stoked concerns about a record influx of migrants into Europe.

The party was founded by ex-Nazis in the 1950s — Strache flirted with neo-Nazism in his youth — and is ambivalent at best about the EU. In an alliance with President Vladimir Putin's party, Strache wants EU sanctions on Moscow lifted.

Vienna will hold the EU's presidency in the second half of 2018, just when Brussels wants to conclude Brexit talks.

"The Freedom Party as a government partner will not make a good impression in Europe [and] Kurz is aware of that," commented Der Standard newspaper.

Ulrike Lunacek, whose Green party may miss out on entering parliament for the first time since 1986, said Sunday the FPOe in government would put Austria "on an anti-EU course."