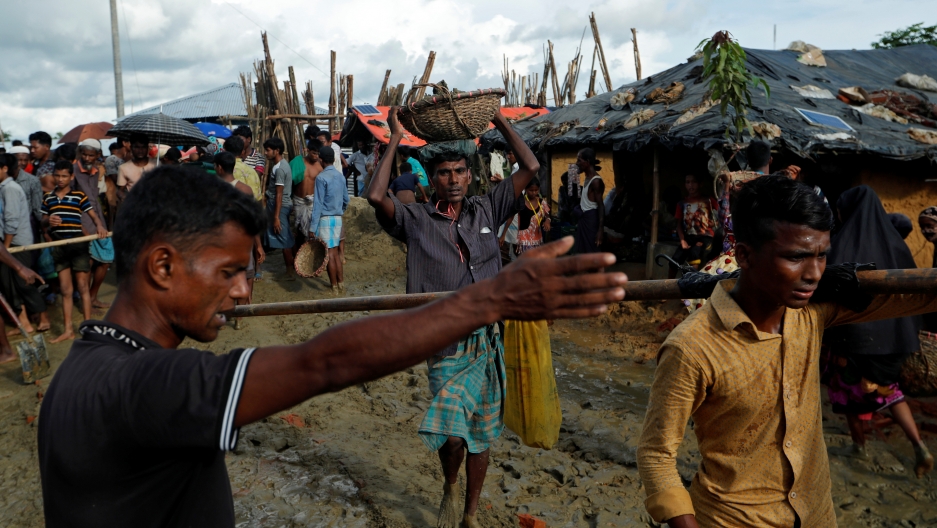 A Rohingya man walks with a basket at Kutupalong refugee camp near Cox's Bazar, Bangladesh, on Oct. 13, 2017.

The incident occurred at Balukhali camp in Cox's Bazar district, where hundreds of thousands of Rohingya have set up makeshift shelters since fleeing violence across the border in Myanmar.

"They were trampled to death by seven or eight wild elephants. They include a woman and three children," Afrozul Haq Tutul, deputy police chief of Cox's Bazar, told AFP.

Two people were also injured, he said, adding all the victims were Rohingya who were building a shack in a part of the forest where wild elephants frequently search for food and shelter.

This is the second time Rohingya refugees have been attacked by wild elephants in the area. Earlier two Rohingya — an elderly person and a child — were killed by elephants as they were sleeping in a makeshift shelter.

An estimated 536,000 Rohingya have arrived in Bangladesh since a fresh outbreak of violence erupted on August 25 in Myanmar's westernmost Rakhine state.

Space at established refugee camps in Bangladesh has been all but exhausted, with new arrivals hacking away trees and other vegetation anywhere they can to erect shelters from the monsoon rain.

Many newly arrived refugees are camping in the open or along roadsides, where they rush aid trucks for food and other desperately needed supplies.

The Bangladesh government has allocated 3,000 acres of forest land to build proper shelters for the refugees but many have already set up shacks before the actual construction begins.

A Cox's Bazar district forest official told AFP that clashes between animals and refugees were "inevitable" as the camp areas have been a roaming ground for elephants for centuries.

"The is a reserve forest land, frequented by wild Asian elephants all the time," he said, speaking on condition of anonymity.

The authorities want to extend the existing camps around Kutupalong and Balukhali into a refugee city for 800,000 Rohingya, but the United Nations has warned such a settlement would be dangerously overcrowded.

The UN calls the army fightback a "textbook example of ethnic cleansing" with villages set ablaze to drive Rohingya civilians out.