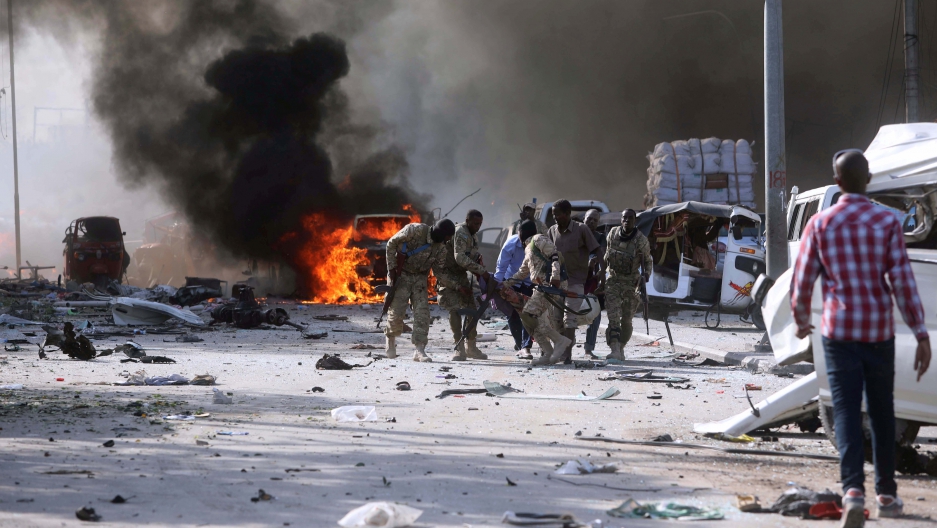 Somali government forces evacuate an injured colleague from the scene of an explosion at Kilometer 4 street in the Hodan district of Mogadishu, Somalia, on Oct. 14, 2017.

A truck bomb exploded outside a hotel at a busy junction in Somalia's capital Mogadishu on Saturday causing widespread devastation that left at least 20 dead, with the toll likely to rise.

"Initial reports from emergency departments indicate more than 20 bodies picked up off the street and many more are under the wreckage of buildings destroyed by the blast," said Ibrahim Mohamed, a senior police officer.

"There was a huge blast caused by a truck loaded with explosives. It went off at the entrance of a hotel alongside the K5 intersection," he said.

There was no immediate claim of responsibility, but the al-Qaeda aligned al-Shabab carries out frequent suicide bombings in the capital and elsewhere as it fights to overthrow the internationally-backed government.

Witnesses said the blast, which threw a thick cloud of smoke into the sky that could be seen across the city, badly damaged a nearby hotel and left scenes of devastation on the busy road.

"This was very horrible, the bomb went off alongside the busy road and left many people dead. I saw several dead bodies strewn about but could not count them," said witness Ismail Yusuf.

Emergency services were overwhelmed as they sought to respond to the bombing.

"This was very horrible incident. The emergency team don't even know how many people they have collected because of the high number of the casualties," said Abdukadir Haji Aden, director of Mogadishu's main Amin Ambulance Service.

"They have collected tens of dead and injured and the work is still ongoing," he said.

The so-called "Kilometre 5" junction is in the Hodan district, a bustling commercial part of the city with many shops, hotels and businesses.

The explosion occurred outside the Safari Hotel, a popular place but not one that is commonly used by government officials. It is not known whether the hotel was the target on this occasion, but in the past the Shabab has frequently attacked hotels where officials stay.

In any case, the devastation caused was widespread. Muhidin Ali, a Mogadishu resident who was close by at the time said it was, "the biggest blast I have ever witnessed, it destroyed the whole area."

"There were dead bodies everywhere and injured people were screaming, some of them from under the rubble of destroyed buildings," said Fadumo Dahir, a witness.

"The whole area looks like a scene from a war," said Ahmed Bare, another witness.

The Shabab was forced out of the capital six years ago by African Union and Somali troops, and subsequently lost control of major towns across southern Somalia.

However, the militants continue to control rural areas and launch attacks on military, government and civilian targets in Somalia, as well as terrorist raids in neighboring Kenya.

Saturday's blast comes two days after Somalia's defense minister and army chief both resigned from their posts without explanation.