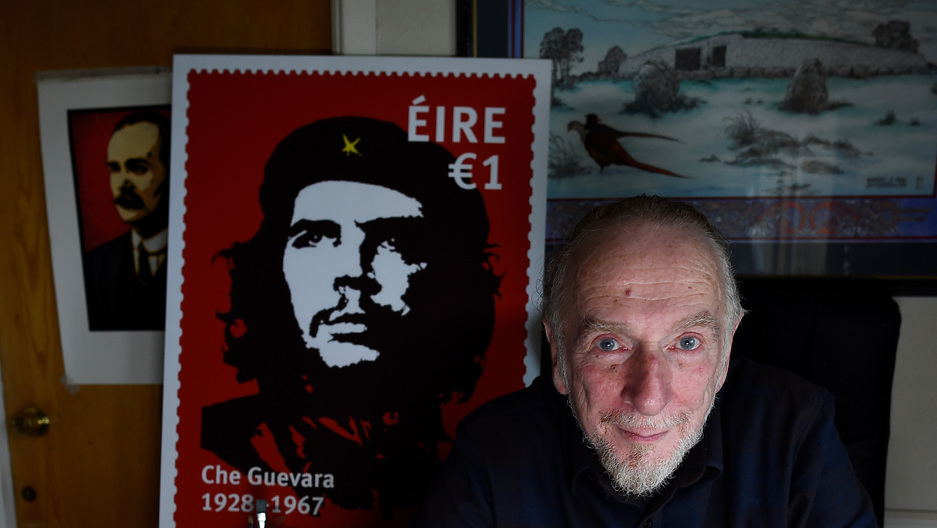 An illustration of a controversial new postage stamp in Ireland with Irish artist Jim Fitzpatrick, who created the famous two-tone image of Che Guevara used on the stamp.

The Republic of Ireland marked the 50th anniversary of the death of Che Guevara, on Oct. 9, with a commemorative postage stamp. It’s become hugely popular, but it’s also causing quite a stink.

Ernesto “Che” Guevara helped lead the communist revolution in Cuba, in the 1950s, but was later captured and executed for trying to launch a revolution in Bolivia.

He was chosen for the stamp, because — to quote the Irish postal service — Che is the “quintessential left-wing revolutionary.” He’s also of partial Irish descent.

That’s right. Irish. His great-great-great-great-grandfather, Patrick Lynch, was born in Galway, in western Ireland, in 1715 into a family that had lost its property in the religious wars. So young Lynch did what so many ambitious Catholic Irishmen of the time did, which was travel to the Catholic countries of mainland Europe to find new opportunities.

Lynch went first to the port city of Bilbao in northern Spain, then followed that city's trade connections to the colony of Río de la Plata — what we now call Argentina. There he found work as a government official and a captaincy in the militia. In 1749 he married a local heiress and consolidated his place in the colony’s elite.

The family was upper-middle-class and played notable minor roles in the history of Argentina and Chile.

That was on Che Guevara's father's side. His father, Ernesto Guevara Lynch, is frequently quoted as saying, "The first thing to note is that in my son's veins flowed the blood of the Irish rebels."

The image being used on the stamp is that iconic two-tone image of Che in his beret, the image that's adorned many dorm rooms and T-shirts. That image was itself produced by Irish artist Jim Fitzpatrick, who based it on a photograph taken in 1960 by Cuban photographer Alberto Korda.

Fitzpatrick is still alive, by the way, and says he’s honored that his image is on the stamp. Neither he nor Korda's estate is profiting from the stamp because the image was never copyrighted. Incidentally, Fitzpatrick also did album covers for Thin Lizzy and Sinéad O’Connor.

But Fitzpatrick’s role is not part of the reasoning of the Irish postal service. That’s the rebel thing.

So what’s the controversy? He’s a son of Ireland. A rebel. What’s the big deal?

Ireland has a love-hate relationship with its left-wing revolutionary heritage, which was most recently embodied by the IRA. One Irish admirer said Che symbolized the better nature of man, pursuing moral causes rather than material advantages.

But Ireland is also a relatively conservative country, and the idea of celebrating violence appalls many. One conservative Irish senator, Neale Richmond, said Guevara was “a barbaric interrogator, jailer and executioner of hundreds of supposed ‘class enemies.’" He added, “it is my belief that he is most definitely not a suitable candidate for such an honor.”

The stamp has also incensed Cuban Americans in Miami, who’ve started a letter-writing campaign to the postal service in Dublin.