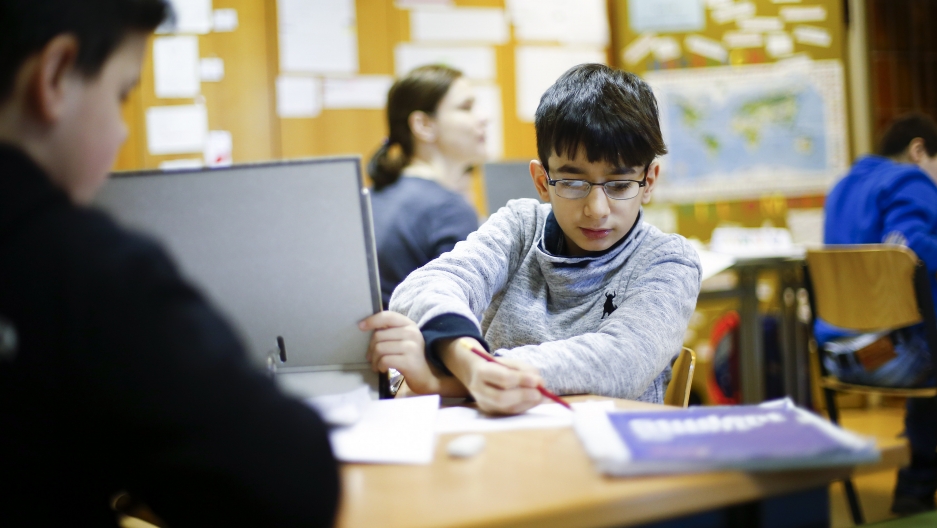 Students in a welcome class for migrants attend a German language lesson at the Sankt Franziskus school in Berlin, Germany, Jan. 22, 2016.

In a modest classroom on the outskirts of Berlin, 10 children, most refugees from Syria and elsewhere in the Middle East, consider a perplexing question: Can goats swim?

Benjamin, a precocious 12-year-old from Iran, pipes up with a confident smile on his face. "Of course they can," he says in German. "There's a lot of goats in Iran — I've seen them swim with my own eyes!"

The rest of the kids are skeptical, but nonetheless accept Benjamin's answer and continue questioning one another about various animals, a game meant to ease them into learning the German language.

Games like this are common in this so-called "welcome class" at Wald Elementary School in Berlin. Currently, 19 children with foreign backgrounds are enrolled in language-intensive courses at the school, where students practice German for about a year until administrators, teachers and parents decide they're ready to integrate into a regular class with German students. More than half of the 19 students at Wald arrived in Germany as refugees.

Similar models for integrating Germany's over 400,000 school-aged refugees have been adopted across the country, said Klaus Hurrelmann, a professor of public health and education at the Hertie School of Governance in Berlin.

In an ideal world, these refugee children would be able to learn German and integrate into a normal school routine within a year's time. But bringing these children into the fold is a difficult task for Germany's decentralized education system, which is understaffed and unaccustomed to diversity. The system has been especially strained in the last two years as the country accepted more than 1 million refugees fleeing conflicts in Syria and elsewhere.

"From an educational standpoint, it's completely foreign for our school system. German schools aren't used to teaching mixed, heterogeneous groups of children," Hurrelmann said. "The result is that there are some schools that are exemplary, and others where it's absolutely not working. 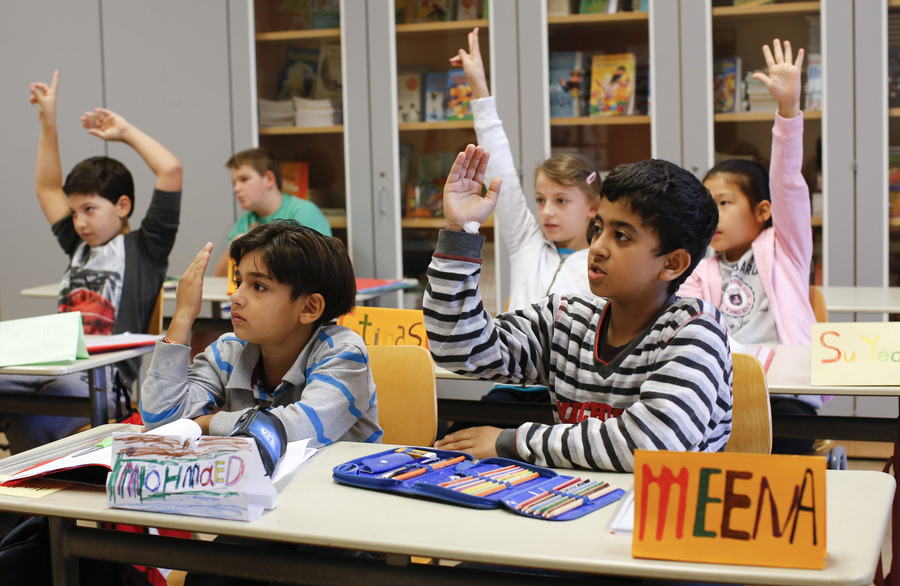 Children in a welcome class attend a German lesson at the Katharina-Heinroth primary school in Berlin, Sept. 11, 2015.

Beate Stoffers, a spokeswoman for the city-state's department of education, said the model is working well in Berlin. The city has educated about 20,000 refugee students over the past two years, and about 8,000 have been integrated into a regular classroom. The remaining 12,000 students are enrolled in welcome classes, she said.

"Berlin has a fixed concept and is following through on that concept in a strategic manner,” Stoffers said. “Every year, representatives from other states visit Berlin to see how we've integrated refugee children and developed a curriculum for the welcome classes."

The city is accustomed to diversity: 28 percent of the population has a foreign background, according to government statistics. The city has used welcome classes to integrate non-German-speaking newcomers for decades, said Stoffers.

Berlin doubled down on the model when Germany became a major destination for refugees and migrants beginning in 2015. There are now 1,100 welcome classes across the city’s more than 600 schools, according to official statistics.

Two such classes are in operation at Wald: One for kids in grades one through three, and another for those in grades four to six.

Teacher Marcia Soraya Gonçalves has taught one of the classes since 2015. This week, however, she's working double duty while the teacher of the school's other welcome class is out on sick leave.

The class atmosphere is light as she engages with the kids, teasing out explanations of their weekends in German. She’s patient and gives them time to answer if they don't know a particular word. With some of the newest arrivals, she switches seamlessly between German, English and Portuguese to help them along with the lesson.

Gonçalves describes her position at the school as her dream job, and has faith that integration can work. But she refutes claims that there's a centralized plan in place to integrate refugee students as quickly as possible. The city is simply muddling through in an attempt to accommodate so many children with special learning needs, she said.

For one, Berlin is short on qualified teachers, as is the case across Germany. According to a 2017 study by Germany's Bertelsmann Foundation, 24,000 additional teachers will need to be hired by 2025 to accommodate about 1 million new students across the country.

In Berlin and elsewhere, the solution to this problem is to quickly certify and hire lateral entrants, who made up 46 percent of all new hires in Berlin this year, according to figures from Berlin's Union for Education and Science.

At the very least, teachers need to have studied German language instruction in order to teach a welcome class, said Stoffers of the city's department of education. The city also makes social workers and child psychologists available to schools on an as-needed basis. Still, many teachers feel they need additional skills to effectively educate refugee students.

Gonçalves has a certification in teaching German as a second language, as well as additional training in early childhood therapy that she picked up in order to better care for refugee children, who are often scarred by the trauma of war. 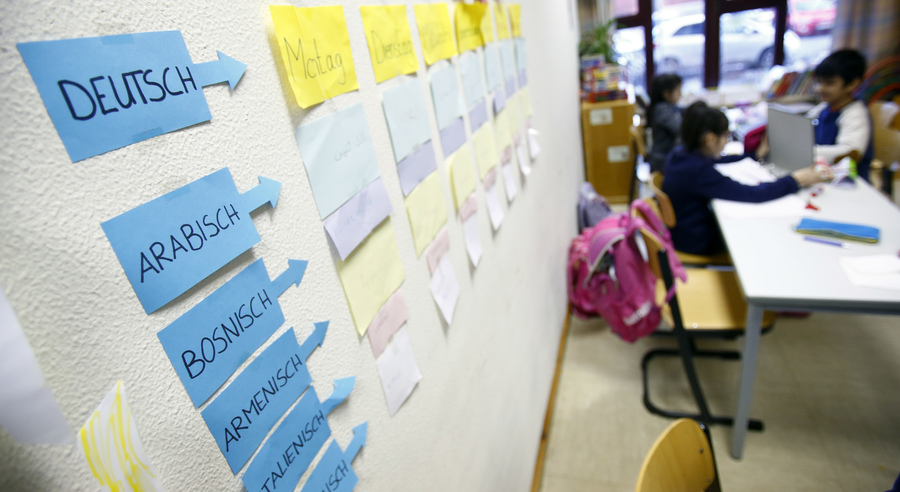 Berlin now has about 1,100 welcome classes in its more than 600 schools. Here, notes on a wall help students from different countries learn German at the Sankt Franziskus school, Jan. 22, 2016.

Bright-eyed Mohammed, 11, and his twin sister Julia, for example, have been in class for nine months. Though their interactions with the other kids wouldn't show it, the twins' family home in their native Damascus was bombed with them inside. Afterward, the family fled to Germany.

Gonçalves says that it took her some time before she could banter with and teach the twins without triggering flashbacks. Unlike herself, many of the teachers just aren't trained properly to meet the challenge of teaching refugee students. And even when they are, teachers often have to fend for themselves.

"The educators have to learn the history of these students on our own and deal with it on a case-by-case basis so as not to trigger the trauma they've experienced," Gonçalves said.

More generally, there's a lack of understanding about refugees and their needs among some German students and their parents, who fear that their children won't receive a spot in a good secondary school and that their education will suffer as a result, Gonçalves said.

Conservative politicians and educators have picked up on those concerns and are calling to limit the number of refugee and migrant students in German classrooms to 35 percent.

"When you have teaching staff … who know that much of what they say in German won't be understood by the majority of the class, then you have teachers that are reaching their limits," said Heinz-Peter Meidinger with the German Philological Society in a recent interview with German public broadcaster Deutschlandfunk.

Such sentiments have created a "zoo-like" mentality in the school in which refugee students are ostracized from the rest of the student body, Gonçalves said.

Twelve-year-old Benjamin, for example, has been in the welcome class at the Wald Elementary School for almost two years waiting for a spot in a regular German class that he should have had access to almost a year ago. Benjamin's German is objectively better than others in his class, and he's almost two years older than most of the other students, Gonçalves said.

"I just wish that there was more consensus between all the schools, the parents, the administrators and the government about the best way to go about this,” she said. "Otherwise, we're sort of separated from everyone else and it runs the risk of ghettoizing the entire process."

Stoffers with the city's department of education says that the city has been working on addressing problems with available classroom spots: The city has purchased property for 51 additional schools that would accommodate 55,000 students; 15,000 new spots have been created over the past three years alone, she said.

"The educators have to learn the history of these students on our own and deal with it on a case-by-case basis so as not to trigger the trauma they've experienced."

But while Berlin and other states operate in triage mode to accommodate new arrivals, the federal government should do more, said Stoffers. Germany's tradition of decentralized education doesn't fit with the current task of integrating hundreds of thousands of refugee students, which she calls a "national task."

"The government has done a lot of work in higher education," Stoffers added. "But in the school sector, it's a much more urgent matter."

Despite the kinks in the welcome class model, Hurrelmann with the Hertie School of Governance in Berlin says the approach overall is a huge step in the right direction toward reforming Germany's schools to be more flexible and inclusive to students with different backgrounds in general.

German schools notoriously separate students early based on aptitude, with a three-tiered system in which only the best get put on a university track. This is a tradition that inherently disadvantages non-native students or those with an immigrant background: Immigrants in Germany perform about 50 percent worse in subjects like math and science when compared to native Germans, even after socioeconomic status is factored in, according to a 2015 OECD study. That study doesn't factor in the hundreds of thousands of refugees that have entered the system in the meantime.

Given such barriers, integrating refugee students — who already have lower levels of education on average — into the German system "is an enormously difficult task," said Hurrelmann. "I fear that in the long term it might not succeed in the way [policymakers] had hoped for," he added.

And if this experiment in integration doesn't work in Germany, where completing a rigorous amount of schooling is key to future success, the refugee kids could become a lost generation, Hurrelmann warned.