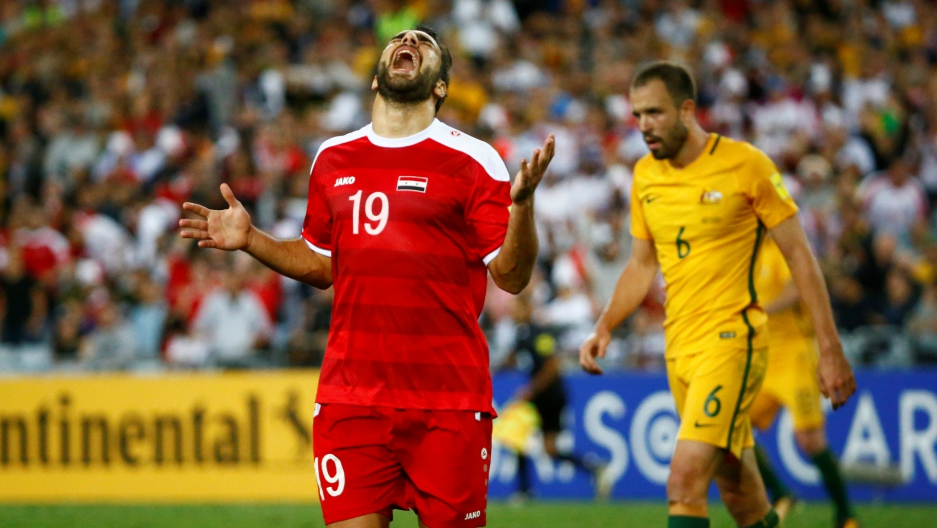 Australia crushed Syria's World Cup dreams in a 2-1 match in Sydney on Tuesday. Some Syrians celebrated the loss.

For many Syrians, their national soccer team’s last-gasp defeat at the hands of Australia on Tuesday was the end of a fairy-tale run.

After six years of brutal civil war, it looked for a short while that Syria might reach next year’s World Cup for the first time in its history. But in the final minutes of overtime, the dream was snatched away.

For some Syrians, however, Australia’s winning goal was a cause for celebration. They had spent every game during this qualifying campaign cheering Syria’s opponents.

“Most people who are affected by this war don’t want the Syrian team to win,” said Abdulkafi al-Hamdo, a 32-year-old teacher living in western Aleppo.

“We cannot call it the Syrian team, it is Assad’s team,” he added, referring to the Syrian President Bashar al-Assad.

More than 400,000 people have been killed and 5 million displaced in Syria’s civil war, which began after the government used the army to put down mass protests against Assad’s rule.

"The Syrian regime took the happiness of football from people." — Anas Ammo​

The United Nations says the government has used chemical weapons more than two dozen times during the course of the war. Both rebels and government forces have been accused by rights groups of indiscriminate bombing — the government on a much larger scale.

Some hoped that the team’s World Cup run might bring the country together. Due to the security situation inside Syria, the team was forced to play their home games in Malaysia. They won a string of unexpected victories against bigger teams. Even Syrians who had fled their home country packed cafes here in Beirut. 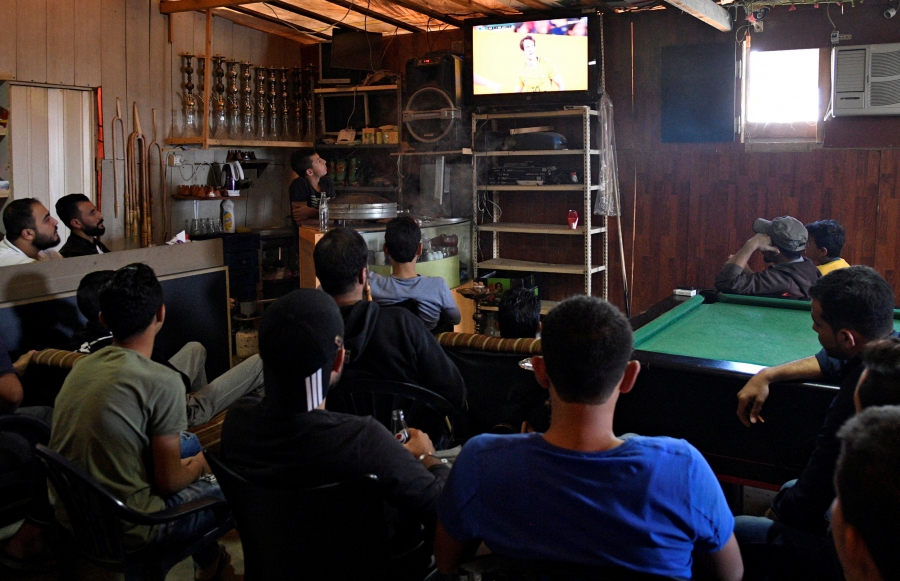 Syrians watch the World Cup 2018 qualifier between Australia and Syria inside a refugee camp in Bar Elias, in the Bekaa Valley, Lebanon, Oct. 10, 2017.

When Syria drew with Iran in the previous round to set up a playoff game against Australia, there were celebrations on the streets of the capital, Damascus, and silence in opposition areas.

Al-Hamdo says the government has used the team as a propaganda tool and exploited its success to burnish its own image.

Supporters of the government and the team say politics has nothing to do with it. Ali Hamdan, a dental student from Tartus, in Syria, flew to Australia to watch the game on Tuesday.

“If these just searched the team squad, they would found that Firas al-Khatib, the team’s top player, was from the opposition. The team name is not Assad team, it is the Syrian team,” said Hamdan, now back in Syria.

Al-Khatib is one of Syria’s most revered players. Early on in the war, he announced he would no longer play for the Syrian team while civilians were being bombed. He later had a change of heart after being offered amnesty by the government and rejoined the team.

For Anas Ammo, a sports journalist in Aleppo before the war, the link between the war and the sport runs much deeper.

Over the last few years, he has compiled a list of Syrian soccer players that he says have been killed or gone missing in government jails.

“The Syrian regime took the happiness of football from people,” he said.

“The army has transformed stadiums into military barracks for the killing and bombing of civilians. They have killed 39 Syrian football players, including 11 players under 19 years old. We have 30 Syrian soccer players in jails of the Syrian regime at this moment.”

Related: Four reasons the US won’t be at next year's World Cup

Ammo currently lives in Turkey, where he manages a soccer team made up of Syrian players who cannot get a license to play abroad. The licenses are administered by the Syrian government.

“I’m happy for Australia. I supported them. I didn’t support the Syrian team because it is a political team. The team is always making political statements. They are trying to influence politics with sports,” he said.

But his antipathy towards the national team began way before this qualifying campaign.

“All institutions in Syria are under the authority of the army and the Baath Party. Football in Syria is for Assad, not for Syria. Not just now, for 40 years.”