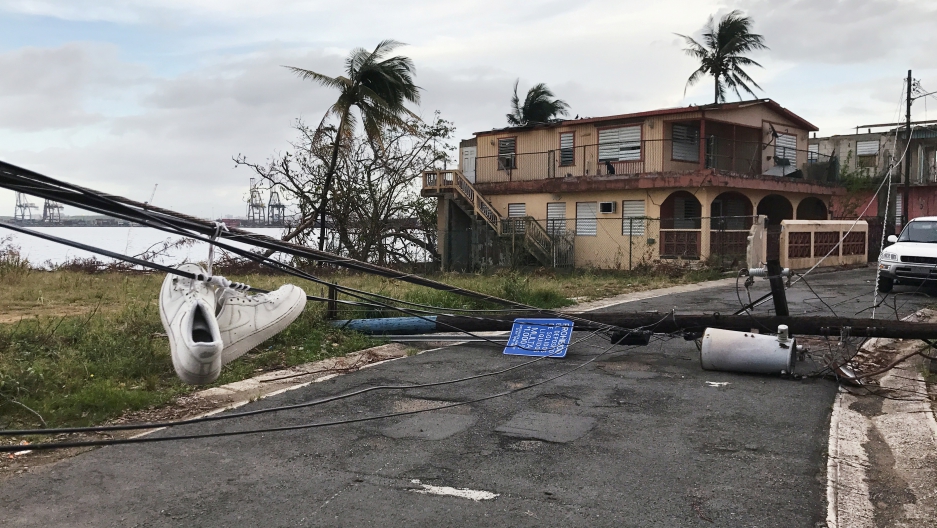 Sneakers hang from downed wires in the wake of Hurricane Maria in the Vietnam section of Guaynabo, Puerto Rico, on Oct. 1, 2017.

Close to 90 percent. That’s roughly how much of Puerto Rico is still without power three weeks after Hurricane Maria slammed into the island.

It’s a major crisis for the US territory, but perhaps an opportunity as well — for the island to start building a more resilient and cleaner power system.

“Even before the storm, the infrastructure was in bad shape,” says Jessica Leigh Hester of The Atlantic's CityLab. “The vast majority [of the island’s power] was supplied by a single utility that leaned heavily on diesel. Customers were already paying close to the highest [rates] in the country, and the company was tremendously in debt and filed for bankruptcy in July.

“The question of how to get the whole island back up and running is also one about what the future of energy and resiliency on the island can look like,” Hester adds.

And into that breach are stepping solar power companies, like Tesla in the US and Germany’s Sonnen.

Tesla, meanwhile, is sending hundreds of its solar batteries to Puerto Rico and discussing a bigger engagement with the island’s governor, Ricardo Rossello.

But of course, Hester says, it’s not just about helping after a crisis.

And Hester adds that many people say such efforts are badly needed.

“Many of the sources that I’ve been speaking with, from former EPA officials to humanitarian officials, are saying that they feel it’s irresponsible to just build the infrastructure back up to the condition it was in before the disaster, because ... fixing a broken system, they told me, is not really a fix at all.”

You can hear the full interview with Jessica Leigh Hester by clicking ton he "Listen" arrow above.