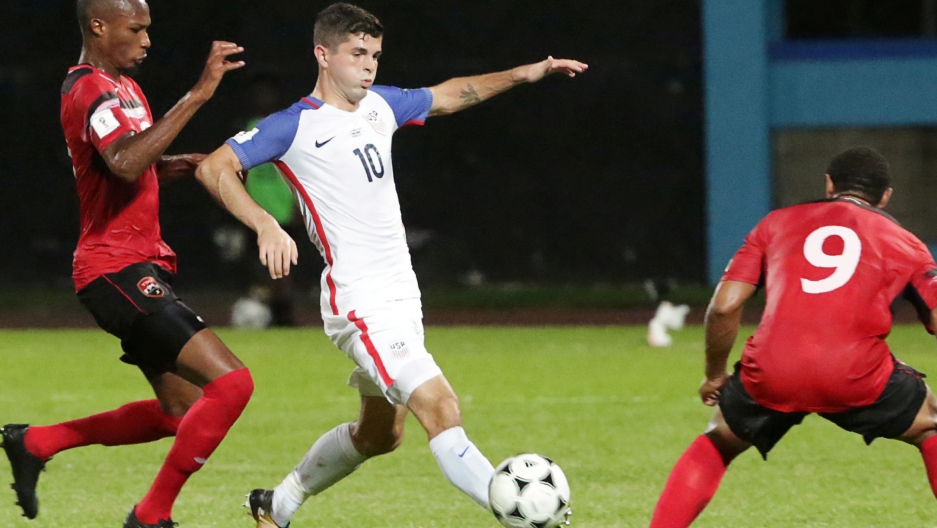 US player Christian Pulisic takes on Trinidad's Kevan George and Shahdon Winchester in a World Cup qualifying game on Oct. 10, 2017.

The United States of America, world superpower and home of amazingly talented athletes, will not be represented in the 2018 FIFA World Cup men’s soccer tournament. Let that sink in for a moment.

Hit the "play" button above to hear us talk about it with Roger Bennett, co-host of the "Men in Blazers" show and podcast for NBC Sports. He's "devastated" by what he calls "US soccer's Red Wedding," a macabre "Game of Thrones" reference.

I can think of four factors that contributed to this sporting disaster: bad luck, not enough new young leaders on the field, lackluster coaching and competition that keeps getting better.

But American soccer fans, don’t despair. These things happen. Teams, even good ones, fail to qualify. Just ask Chile or the Netherlands. Both are staying home next year, too. Still, some of the factors that contributed to this fiasco are worth studying as US soccer picks up the pieces and tries to move forward.

First, though, let’s acknowledge the bad luck. A lot of things had to go wrong in the last qualifying matches for the US to be eliminated. And they all went spectacularly wrong. Like US defender Omar Gonzalez mishitting the ball to give it just the right trajectory and spin to beat his own goalkeeper and hand Trinidad and Tobago an unexpected lead.

But there was more bad luck elsewhere. For the US to be eliminated, not only did the Americans have to lose their match, but Panama and Honduras both needed miraculous victories in simultaneous games against Costa Rica and Mexico, respectively. All three outcomes were considered highly unlikely ahead of time. But they all came through.

So yeah, bad luck had something to do with it. But here are some of the reasons the US Men’s National Team was vulnerable to such bad luck in the first place.

First and foremost, there’s a lack of new talent on the team. Unlike the US Women’s National Team, which seems to produce new, young stars on a regular basis, the US men have had to rely on aging veterans for too long to get the job done.

Great players like forward, Clint Dempsey, and goalkeeper, Tim Howard, used to get the US out of jams like this. But they are 34 and 38, respectively, old for soccer players, and as they’ve aged, they’ve lost a step.

Yes, there are younger players emerging, like 19-year-old midfielder Christian Pulisic. He plays his club soccer in Germany and is already considered among the best Americans in the sport. But he’s also still a teenager, and inconsistent at times. Hugely talented? Yes. An on-the-field general? Not yet.

Perhaps with time, Pulisic and others in a new generation of US players will develop into great leaders. Torches are routinely passed from generation to generation in soccer, and sometimes the process is painful. Again, ask Chile.

Related: Many Syrians are thrilled their national soccer team didn't make it to the World Cup

The bigger problem for US Soccer, the governing body of the sport in America, though, is finding the right leadership on the bench. The last two head coaches of the US Men’s National Team haven’t cut it, frankly.

One was Jurgen Klinsmann, a former German national team star who took the US to the Round of 16 at the last World Cup in Brazil. Not bad. But after that, Klinsmann failed to find a way to rejuvenate the squad while still winning games.

Before Klinsmann was Bruce Arena. He, too, led the US to great results: a World Cup quarterfinal in 2002. That’s still the best the US men have done on the global stage. Arena was brought back in 2016 after Klinsmann was let go, but now Arena doesn’t seem like the right guy for the job, either. His latest teams looked mostly flat and lacking in a sense of urgency on the field. Especially in that last game against Trinidad and Tobago.

Perhaps the problem is the belief that after seven consecutive successful World Cup qualifying campaigns, the US team had a guaranteed place at the table. That place is never guaranteed, as we now know.

Part of the reason for that is good news, actually. The highest professional soccer league in the US, Major League Soccer, is no longer considered a joke around the globe. The level of competition in MLS is now high enough to attract big-name players, American and non-American alike, before they reach the twilight of their careers. The league is also producing new talent.

The problem is that a lot of that rising talent belongs to other countries in the region that compete against the US for a place at the World Cup. The best example of that? Román Torres, a defender for the Seattle Sounders in MLS. He scored the goal that earned Panama its first-ever trip to the World Cup while simultaneously eliminating the US.

That has nothing to do with bad luck. But it is a warning for the men of US soccer to up their game.