Juweon Kim and Kenneth Park have a lot in common.

They grew up in the United States: Kim in Texas and Park in Los Angeles. They are the children of Korean immigrants. Their parents also worked, a lot. And that meant that when it came to making dinner, they were often on their own.

When you would open up the fridge at his childhood home, Kim says, “there’s usually some sort of a protein, a bulgogi or a galbi or a type of barbeque meat.”

“And at my house,” Park says, “there was always tortillas and cheese — for quesadillas, for snacks, for things like that.”

That combination, Kim says, of leftovers and local staples, laid the groundwork for the restaurant they opened in Seoul, South Korea.

“We have the Korean food influence from our home, through our parents,” Kim says. “And then when we are out in a social setting in the US, in Texas and California, we got the Mexican influence because it's such a go-to food for everybody. It's a comfort food.”

This style of cooking is known as Korean-Mexican fusion food, and it was made popular by LA chef Roy Choi — a South Korean, himself, who grew up in Southern California — and his Kogi Truck which is now a fixture in the city's culinary ecosystem.

"Basically, we looked at the example of Kogi Truck and we said this food truck and the food genre that this guy created has a humongous following, and it’s based off of Korean food,” Kim says. “And we said, ‘why wouldn't this work in Korea?’”

Korea doesn't have a food truck scene. So, Park and Kim decided to open a brick and mortar restaurant a few years ago. It is now one of several Korean-Mexican places in Seoul. 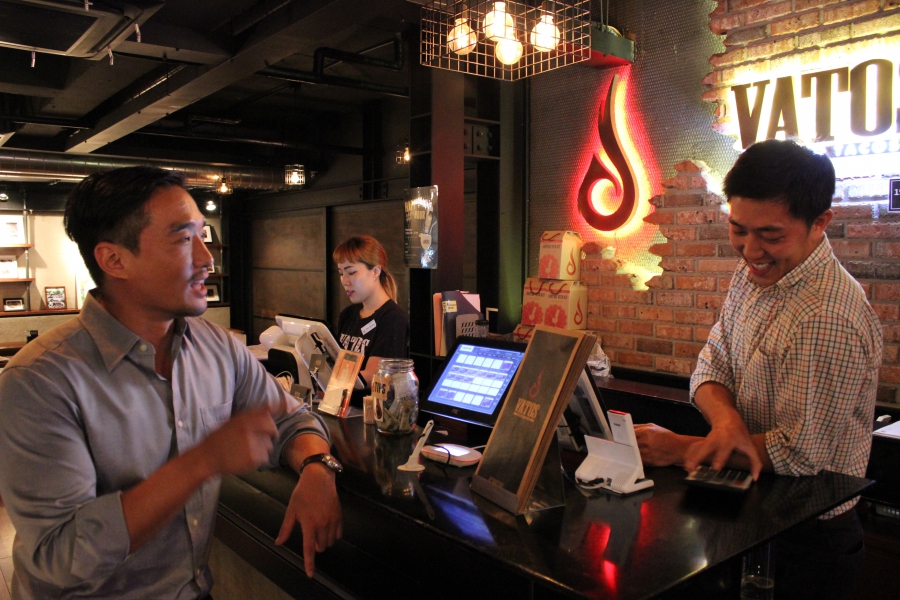 I recently traveled to Seoul to check out the food at Vatos Urban Tacos with Kim and Park.

They tell me that one of the more popular dishes at the restaurant are their kimchi fries.

“Stab it from the top, to get all the ingredients together," Kim says.

These fries are carnitas, a little cream sauce, salsa and some red onion. But it is the kimchi — with its pungent smell and salty and spicy taste — that, conceptually, doesn't belong anywhere near Mexican food. But, somehow, it works.

There's also galbi, which is a Korean short rib dish — mainly beef, marinated with a little sugar and ginger. At Vatos it’s served on a taco with an Asian-inspired slaw, some cilantro and a ssamjang aioli.

"Ssamjang,” Kim says, “is the bean paste and red pepper paste mix that you use on all Korean BBQ wraps.” 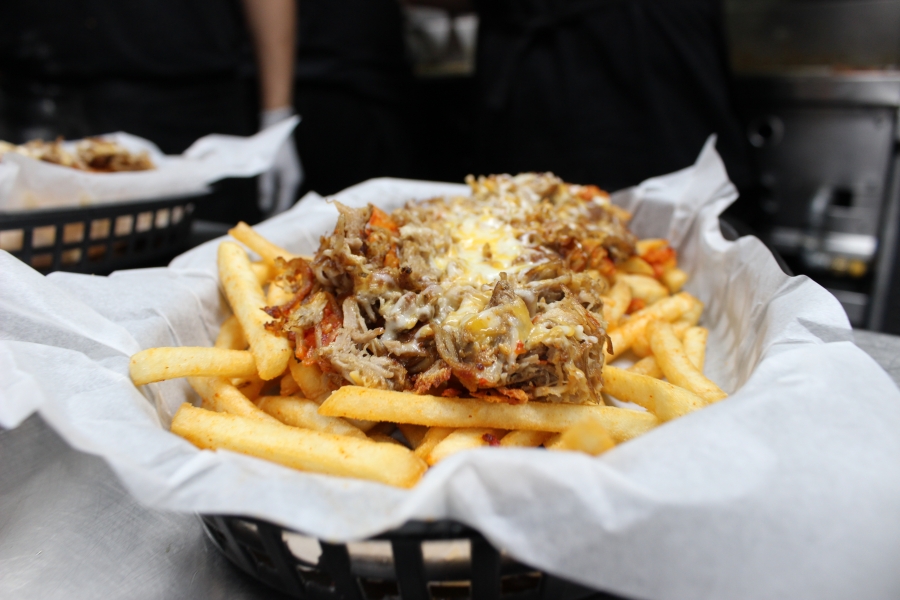 For me, it's a combination of flavors I know pretty well from eating in LA where fusion cuisine has been popular for decades. Here in South Korea, there's Italian food and Mexican food. But Korean-Mexican fusion? Does that work here in Seoul?

It turns out, yes.

When I went to meet the two restaurateurs, the Mexican ambassador to Korea, Bruno Figueroa, is there hosting a party for other diplomats. He says he has been to the restaurant before.

It is also popular with many of the locals.

The day I am there, the place is packed.

“I like it because it has both Korean and Mexican flavor,” says Poi Yong Lee, who is sitting across from her friend with a table full of food.

For another patron, Kang Yu-Sig, he says he prefers the Kimchi quesadilla.

But not all the flavors work here — at least not at first. When I ask Park and Kim about a challenge they faced when opening their restaurant, they both mention cilantro, an herb key to Mexican cooking.

"People said, hey you can't make it with Mexican cuisine because of cilantro, Korean people just don't like it,” Park says.

For many Koreans, cilantro just tastes like soap. Park says they decided to ignore that.

"So we consciously decided, you know what, put it on everything.”

At first, Park says they'd offer refunds to people who tried their spicy chicken tacos, their staple, kimchi fries, or anything that had cilantro if customers did not like it. And, after a while, people stopped asking to hold the cilantro.

Another challenge? Kim says it can be hard to find the right ingredients.

"When we started the restaurant, there was no masa in Korea,” he said.

Masa is a corn flour. And if you have had street tacos in Mexico or after a late night in Southern California, you're familiar with that thick, almost granular texture.

Kim says they literally had to bring it in by the suitcase, and that is how their hybrid tortilla was born. At Vatos, they're serving tortillas made with corn and wheat flour — it tastes more like a dumpling wrap.

When I ask them how they feel about moving to back to Korea, Park says it's something that was always in the back of his mind.

"I think Korea is a really exciting place to do business,” he says. “You see a renaissance of sorts from returning Korean Americans. A lot of the good restaurants, a lot of them that are getting a lot of buzz, a lot them are spearheaded by Korean Americans."

There are Koreans-Americans from New York who are making pizza. There’s another who grew up in Alabama who has a southern BBQ restaurant in Seoul. There's even a guy with a halal joint.

And then there's Park and Kim who grew up eating Korean-Mexican leftovers — 6,000 miles away.

This story was supported by a grant from the East-West Center.

Special thanks to Eunie Rhee, in Seoul.