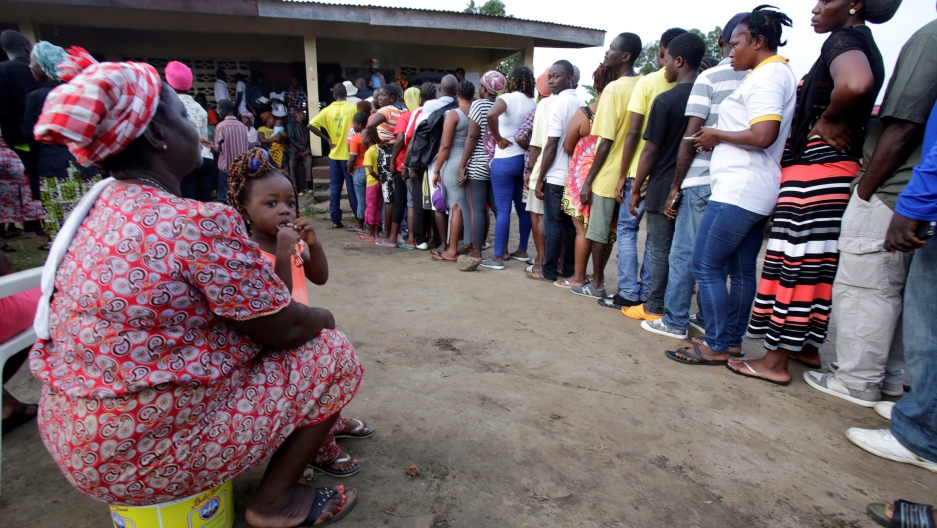 People wait to vote during the presidential election at a polling station of Duport Road in Monrovia, Liberia, Oct. 10, 2017.

The contenders facing off in Liberia's presidential vote on Tuesday are a diverse group.

There's a former professional soccer player, a Coca-Cola executive and a vice president who isn't on speaking terms with the current head of state.

And then there are the two former warlords known for committing atrocities in Liberia's 14-year civil war.

"There's Prince Johnson — he's the guy who videotaped his forces cutting off Samuel Doe's ears while he sipped a beer back in 1990," says New York Times correspondent Helene Cooper who's in Liberia for the vote. "It's an extraordinary day."

For the past 12 years, former World Bank executive Ellen Johnson Sirleaf has been president. Now Sirleaf, Africa's first elected female head of state, is preparing to step down. And the race to fill her seat began in earnest Tuesday with the first round of voting.

Cooper, a Liberian-born American, says a past tainted by the civil war isn't a deal breaker for voters evaluating candidates.

"This was a civil war and everybody had sides. Here in Liberia, the Charles Taylor people all point to the Samuel Doe people as the ones who perpetrated the horrors," Cooper says. "They think that they were fighting for a just cause, and vice versa."

Regardless of who wins, it seems pretty clear that a dozen years of female rule will end.

"We've had 12 years of peace under Ellen Johnson-Sirleaf and she's doing something now that's pretty extraordinary for an African ruler. She's stepping down at the end of her term," Cooper says. "You know, we don't do that much here on the continent."

Sirleaf's supporters are laying the groundwork for their leader's departure. They staged a rally this weekend in Monrovia.

"They were demonstrating and dancing in front of a sign that said, 'Don't touch our peace,'" Cooper says.

Their warning to male candidates couldn't have been more pointed.

To hear more about Cooper's take on the Liberia vote, listen to the full interview above.