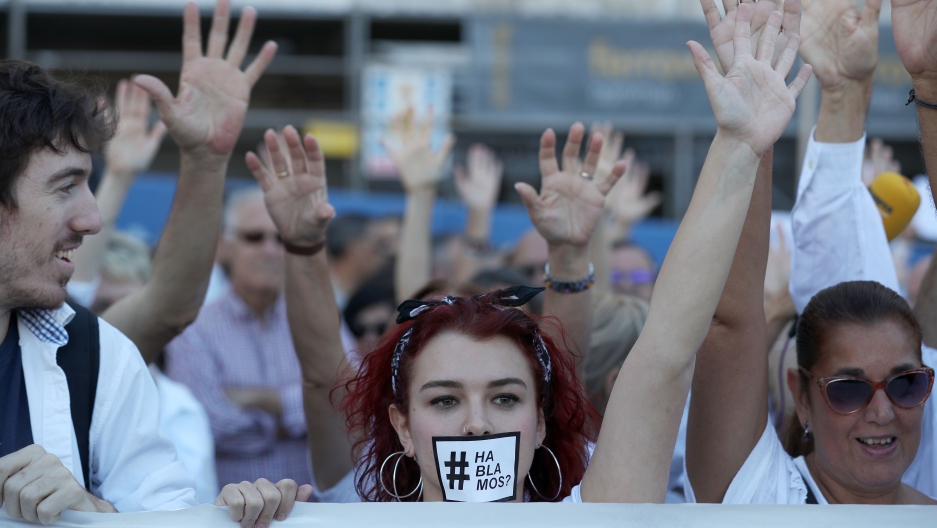 People take part in a demonstration in favor of dialogue to resolve Catalonia's bid for independence, in Madrid, Spain, Oct. 7, 2017.

The French region of Pyrenees-Orientales — known to some as Northern Catalonia — is keeping an anxious eye on the crisis just across the border.

Taken over by France in the 17th century, many in this region nestled between the Pyrenees mountains and the Mediterranean retain close cultural links with Catalonia to the south.

"They have family ties, they go there on weekends," said Jean-Luc Pujol, co-founder of the political party Yes To A Catalan Country, which pushes for greater autonomy in the French region.

Home to some 470,000 people, Pujol said there were fears in the Pyrenees-Orientales of serious violence in Catalonia following its tumultuous independence referendum — and of an economic fallout.

If Catalonia is the richest part of Spain, the Pyrenees-Orientales remains among France's poorest departments.

Separatists are "very much a minority" in the French region, said Pujol.

"But a large number of people have a lot of sympathy for the Catalans and are ready to defend their identity, without wanting to leave the French state."

Some in France even took an active role in preparations for Catalonia's banned Oct. 1 referendum.

According to Pujol's party, several million ballots were printed by companies in the Pyrenees-Orientales and sent over the border.

Two demonstrations in the regional capital Perpignan have each gathered some 500 people protesting against the violent crackdown on the vote, which saw 90 percent back secession in a poll boycotted by many who reject independence.

"It is a very dangerous situation," he said.

The prospect of a Catalan independence bid is cause for particular concern for the region's businesses.

For Bernard Fourcade, president of the local chamber of commerce, independence "seems rather unrealistic. Catalonia would be forced to leave Europe — it seems complicated."

He added that the economic problems raised by the Catalan crisis were not being discussed enough.

"Perhaps over time it will come back to haunt us," he said.

Raymond Mitjavila, who runs businesses operating in both France and Spain including in Catalonia, said "economically, it will be a mess."

"Forty-five percent of our sales revenue comes from Spain," he added.

Mitjavila's parents, like many others, arrived in the Pyrenees-Orientales after fleeing the Spanish dictatorship of Francisco Franco.

"It's exasperating what's happening. In my heart, I'm with them," he said of the separatists.

"But what is happening is scary."

Few in the Pyrenees-Orientales are mulling a similar breakaway bid — Jaume Roure, president of local pro-Catalan party Unitat Catalana, said the region was "light-years away from independence."

But campaigners are pushing for Northern Catalonia to win special status within the framework of the French constitution, similar to that held by the island of Corsica.

If the Catalan crisis "can reinforce a sense of identity ... attachment to France in the Pyrenees-Orientales is very, very strong," said Mayor Jean-Marc Pujol.