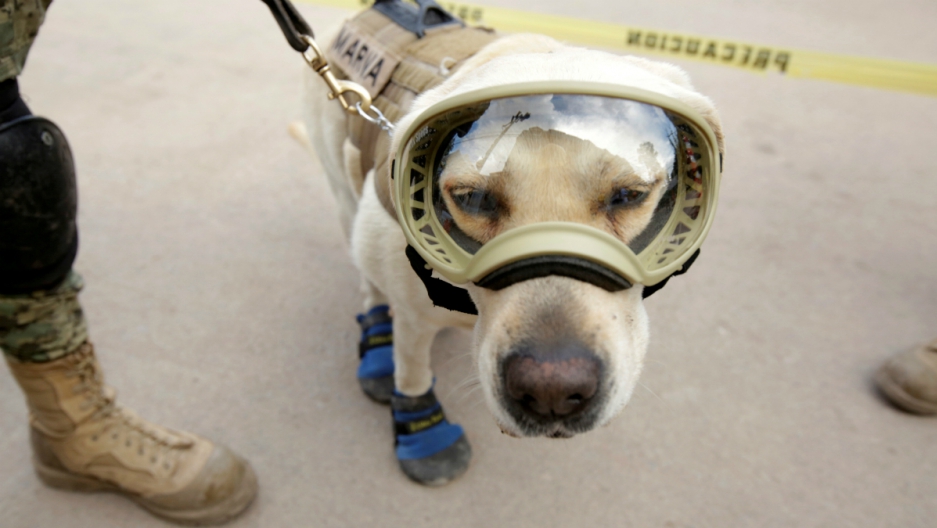 Rescue dog Frida looks on while working after an earthquake in Mexico City, Mexico, Sept. 22, 2017.

The Sept. 19 earthquake in central Mexico killed more than 300 people and destroyed many buildings in the nation’s capital, Mexico City. In the days that followed, rescue crews went out to search for survivors trapped under collapsed buildings.

And one rescuer, in particular, got a lot of attention.

Her name is Frida. She’s 8 years old, and she's a labrador sniffer dog with the Mexican Navy. According to the Navy, she has a "sixth sense" for finding humans, that's unlike any other dog they've ever trained before.

Over the course of her career, she’s rescued 12 people after earthquakes and other disasters in Mexico, Haiti and Ecuador. She’s also found 53 bodies buried under rubble.

Reporter Franc Contreras in Mexico City went to meet her for the China Global Television Network. “I would say, at this stage, she's a rock star but she doesn't let it get to her head,” he says. “She’s just getting used to being in front of the cameras because she's gotten so much attention lately.”

Photos of Frida wearing her special protective goggles or “doggles,” a vest and boots have been making the rounds all over Mexico and even the world. There’s a campaign on Facebook for her face to replace Diego Rivera’s on the 500 peso banknote. Murals have been painted in her honor, and shops are selling Frida stuffed animals, Frida shirts and Frida mugs. One man even got a tattoo of her face.

Contreras says that he thinks Frida and the other search and rescue dogs have given the country a renewed sense of hope. “There have been a lot of reasons to divide Mexicans, politics economics,” says Contreras. “But after this disaster, you could really see the country pulling together and somehow, you know, these furry creatures on the scene helped lift people's spirits.”