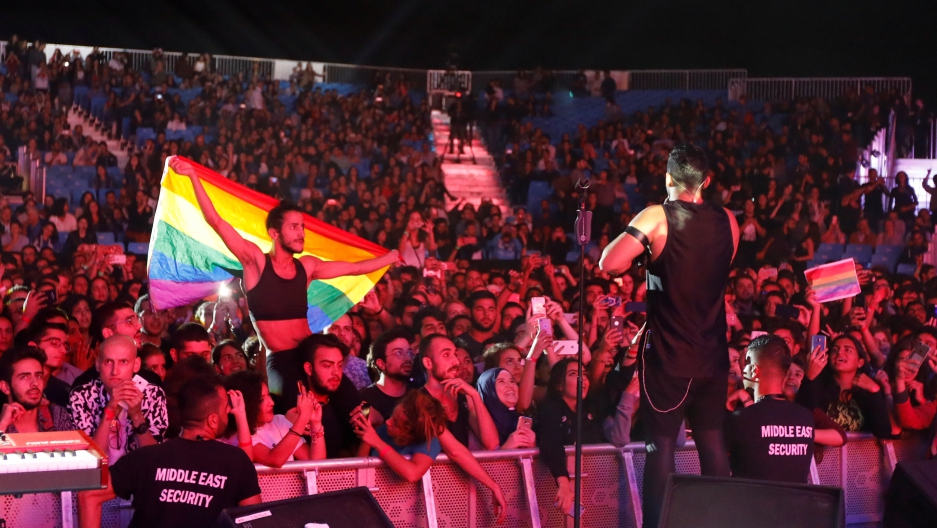 A fan of Lebanese alternative rock band Mashrou' Leila holds a rainbow flag during their concert at the Ehdeniyat International Festival in Ehden town, Lebanon Aug. 12, 2017

Fans waving rainbows flags at the concert became targets. Egyptian authorities have arrested at least 57 people in the escalated persecution of LGBTQ communities in Egypt.

This recent crackdown is part of an Egyptian government and media attack on what they label public indecency and "debauchery." Although there are no laws that outlaw homosexuality in Egypt, conservative society has targeted gay men.

Since 2013, local police have used dating apps to identify and arrest gay men, lawyers say, in addition to raiding homes and parties.

The arrests following the concert have drawn considerable condemnation from human rights groups, and a plea from Mashrou' Leila for solidarity among activists and artists.

Mona Eltahawy, an Egyptian-American writer, has called the situation "hysterical homophobia” and explains that it is "the worst crackdown on the LGBTQ community in modern Egyptian history.” She says condemnation from the international community is a vital next step.

But “so many countries that claim to be beacons of human rights and civil liberties have been shamefully silent," she adds.

Hear more about the progression of the LGBTQ crackdown in Egypt in the audio, above.