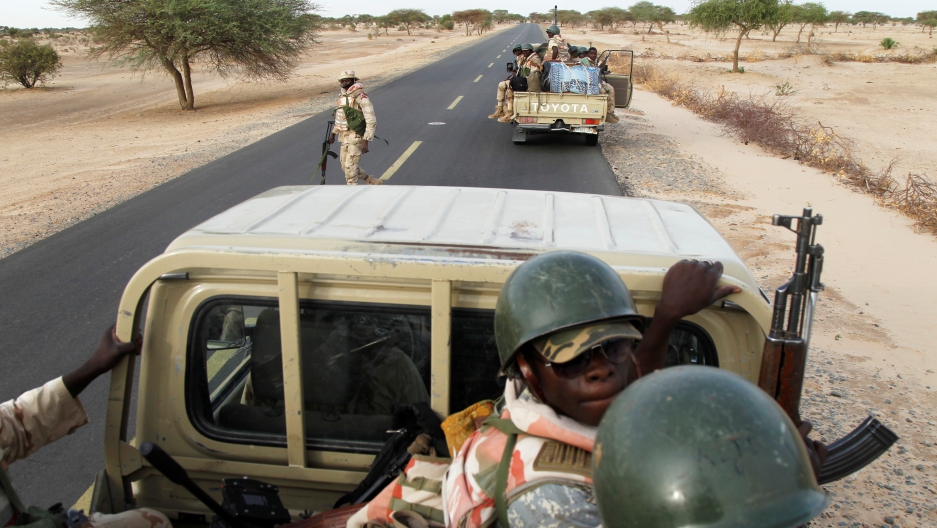 Nigerien soldiers patrol near the town of Diffa, Niger. US Special Forces are training Nigerian troops on Niger's border.

The death of three US Special Forces soldiers in an ambush in Niger this week was the first indication many Americans had that the US had boots on the ground in the West African nation.

The US soldiers — all Green Berets — were training troops from Nigeria in counterterrorism operations when they came under attack.

US soldiers were first deployed to the West Africa nation in 2015 when President Barack Obama sent 350 US troops to the country to combat al-Qaeda-related groups including Boko Haram.

"The area these troops were operating in has been plagued in recent months with a lot of competition actually between Islamist terrorist groups, each trying to show itself as the better, more lethal, more deadly force," says J. Peter Pham, a vice president at the Atlantic Council's Africa Center in Washington.

The US presence in Niger isn't limited to training African troops. The US Air Force Expeditionary Air Base squadrons operate a drone base out of Niger's capital, Niamey. And the Pentagon is building a $100 million drone base in Agadez, in central Niger.

Although the US military presence in West Africa is robust, the vacuum in US diplomatic efforts there grows wider daily. That's in part because US Secretary of State Rex Tillerson has left unfilled many top Africa slots at the State Department. The exodus of experienced diplomats at the State Department, including staffers with long Africa experience, continues. The White House has not named an assistant secretary of state for African affairs or a principal deputy.

"We do have US ambassadors present in these countries," says Pham, who has been mentioned for the job of assistant secretary of state for African affairs in a Trump administration. "It's desirable to get people in place. But you know, it's worth recalling that other administrations have also taken a long time."

Listen to the complete interview for more on Pham's view of US priorities in West Africa.