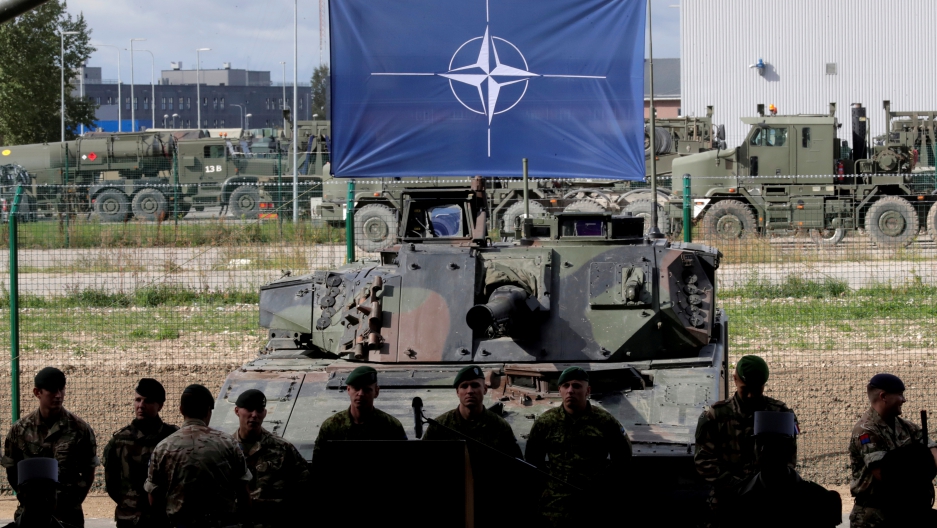 It probably comes as no surprise that even soldiers are attached to their cellphones.

For soldiers posted outside their countries, a phone can be a lifeline to loved ones and news from home. Nearly every enlisted service member carries one.

But smartphones are vulnerable to hacking — and that’s an avenue Russia is looking to exploit.

Western military officials, according to The Wall Street Journal, say Russia is carrying out a campaign to hack the phones of NATO soldiers. The target: 4,000 NATO troops deployed to Poland and the Baltic states to protect the European border with Russia.

US and other officials say the attacks are well within the Kremlin’s electronic warfare capabilities.

Related: Finland opens a new center to fight 'hybrid threats' from Russia and beyond

A compromised phone brought onto a secure base could help Russia gain information about NATO troop levels, locations and operations. Officials also say hackers who gain personal information could use it to harass and intimidate soldiers.

Near Estonia’s border with Russia, numerous soldiers in January complained of “strange things” happening to their phones on the Tapa military base shortly before French and British NATO soldiers were due to arrive, according to an officer on the base with knowledge of the incident.

A probe indicated Russia had used a portable telephone antenna to gain access to phones in the area, said the officer. The device apparently grabbed data sent from mobile phones and erased information on them.

“They were stripping everyone’s contacts,” the officer said.

In March, an Estonian conscript’s phone started playing hip-hop music he hadn’t downloaded while he was stationed on the Russian border, the soldier said. Contacts started disappearing from his phone around the same time, he said.

Since the Tapa incident in January, soldiers on the Estonian base remove SIM cards from their phones and are allowed to use the internet only at designated secure hot spots. Use of geolocation is forbidden.

Estonian conscripts said they are forced to jump into a lake during operations to ensure they are following a strict “no smartphones” policy. Some get around the practice by wrapping their phones in condoms.

The British contingent at the base said it has taken necessary measures to protect troops.

Information gleaned from personal communication, contact lists and social-networking sites has been used in encounters that indicate a goal of harassment or intimidation, according to Western officials.

In Latvia, a U.S. soldier standing in line for a sports event was approached by a person who casually dropped details of the soldier’s life, including information about family members, said a person close to NATO. A similar incident happened to a U.S. soldier on a train in Poland, that person said. Both encounters were believed to have been with Russian agents.

“Russia has always sought to target NATO servicemen for intelligence exploitation,” said Keir Giles, an associate fellow at Chatham House’s Russia and Eurasia Program. “But such a campaign of harassment and intimidation is unprecedented in recent times.”

You can listen to the The World's full interview with Thomas Grove above.