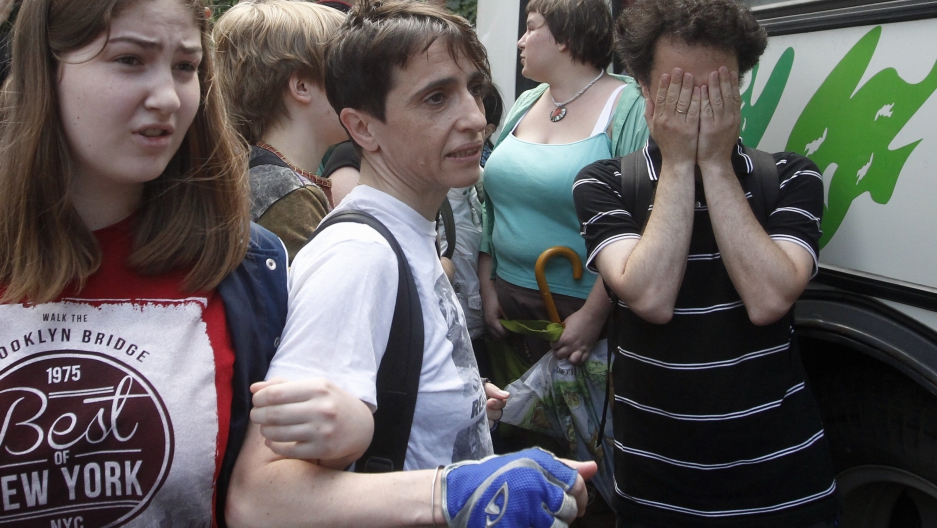 Russia-born US journalist Masha Gessen (center) in a 2013 protest in Moscow against Russian legislation that would ban gay rights rallies.

But in a good way.

As late night comedian Samantha Bee told the New Yorker author, "You always scare the hell out of me. And yet I find you so reassuring somehow, in the same way that when I go home at night I try to relax watching 'The Handmaid's Tale.'"

Gessen's new book, "The Future Is History: How Totalitarianism Reclaimed Russia," is as disquieting as you might expect. It follows seven characters, demonstrating how memories of state terror are transmitted — sometimes unconsciously — from one generation to the next.

"The initial hypothesis ... was that once the generation that had lived through the Great Terror sort of died off, the trauma would go with them and society would change in a fundamental way," she says. "That didn't happen."

Neither did democracy happen in Russia, despite the desires of so many.

Gessen wanted to figure out why.

She explores the topic via characters like a psychoanalyst, who tells the story of a young Russian girl who acts out, lighting the curtains of her home on fire and locking her grandmother out on a balcony in the cold.

"The woman realized very quickly that the child was expressing her pent-up anger at her mother. But then as they dug deeper, they discovered that the grandmother had been a guard in the gulag. So the little girl was not only expressing her mother's aggression, but also unconsciously reproducing the torture practices from the gulag where locking somebody outside in the cold was a very common thing," Gessen notes. "To me that story serves almost as a metaphor for the entire book, because it's very much about how Russian society has come to reproduce practices that were developed in response to state terror, and it's doing it unconsciously, kind of like the little girl was reproducing torture practices."

Listen to the full interview with Masha Gessen above.

Read an excerpt of her new book here:

The Future Is History: How Totalitarianism Reclaimed Russia by PRI's The World on Scribd