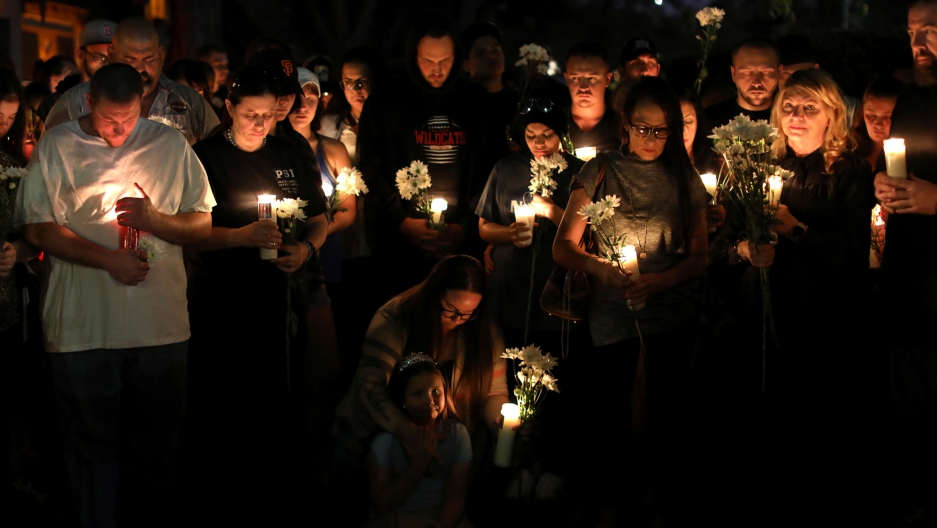 A candlelight vigil is held in remembrance of victims following the mass shooting along the Las Vegas Strip, October 3, 2017.

Las Vegas shooter Stephen Paddock's girlfriend, Marilou Danley, returned to the United States from the Philippines late Tuesday night. The FBI says she is not in custody but she is classified as a "person of interest" to investigators in the worst mass shooting in US history which left 58 people dead and more than 500 wounded.

Danley, 62, was in the Philippines when Paddock opened fire with high-power rifles from a 32nd floor hotel room Sunday night at a sea of concertgoers below on the Las Vegas strip.

Authorities are investigating reports that while she was in the Philippines, Paddock wired her $100,000.

Danley is an Australian citizen who moved to the United States 20 years ago to work on the casino strip, the Australian government confirmed Tuesday. 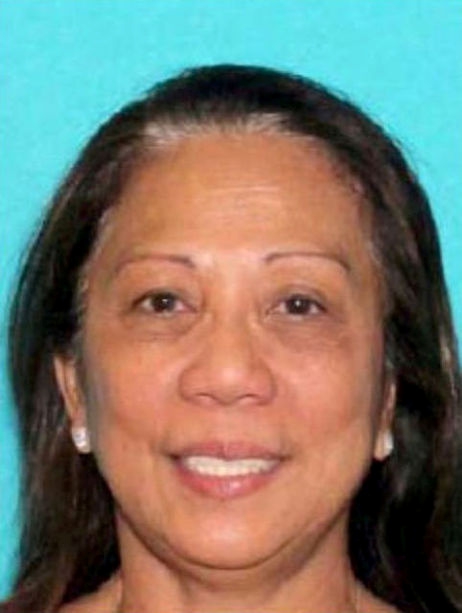 Marilou Danley, the girlfriend of Stephen Paddock, the gunman who carried out the Las Vegas attack in an image released by the Las Vegas Police Department.

As America mourned, President Donald Trump prepared to visit the desert city Wednesday. He has branded Paddock a "demented man."

Beyond Trump's assessment, authorities were at a loss as to how a 64-year-old gambler and retired accountant had hauled a vast arsenal of weapons to the hotel and launched his assault.

Authorities say the shooting appeared to be carefully planned: Paddock set up one camera in the peephole of his hotel room door and two in the hallway.

"I anticipate he was looking for anybody coming to take him into custody," said Sheriff Joe Lombardo

Meanwhile, victims began to be identified in the media, each new story stirring emotions as America once again grappled with calls for reforms to its permissive firearm control laws.

Trump was not ready to suggest answers.

"What happened in Las Vegas is in many ways a miracle," he said. "The police department has done such an incredible job, and we'll be talking about gun laws as time goes by."

US officials have reacted cautiously to a claim by the jihadist group ISIS that the shooter had carried out Sunday night's massacre on its behalf.

Related: There’s no evidence linking the Las Vegas attack to ISIS. So why did the group claim responsibility?

Authorities said Paddock, who had no criminal record, smashed windows in his hotel room shortly after 10 p.m. on Sunday and rained fire on a crowd of some 22,000 attending a country music concert below.

In footage of the massacre, the sustained rattle of gunfire is heard as people scream and bolt for cover with little idea of where the shots were coming from.

Lombardo said Paddock fired through the door of his hotel room and hit a security guard in the leg.

But when a SWAT team stormed the room where Paddock had been staying since September 28, they found he had killed himself.

'Mind of a psychopath'

So far, investigators have found nothing to explain the actions of the gunman, but were continuing to hunt and trace every possible clue about a gunman they described as a "psychopath."

"For this individual to take it upon himself to create this chaos and harm is unspeakable," Lombardo told journalists Tuesday, saying the shooter's degree of preparation made it clear the attack was extensively premeditated.

Details started to emerge Tuesday about some of the victims — a kindergarten teacher from California who had married her childhood sweetheart, a Tennessee nurse, a high-school secretary from New Mexico.

Stories of heroism also surfaced. Bruce Ure, deputy police chief of the small Texas city of Seguin, was in the concert's VIP section when the gunfire broke out.

He sheltered from the bullets between two buses, then tended to three people who had been shot. Ure loaded the bleeding strangers into a passing car and rode with them to a hospital.

While the White House has rebuffed calls to reopen the fraught US debate on gun control, Congress did shelve a controversial plan to make it easier to purchase gun silencers and make it more difficult to classify certain ammunition as "armor piercing."

'Two doors from a lunatic'

According to his brother, Paddock was a high-stakes gambler and their bank-robber father was once on the FBI's 10 Most Wanted list.

But Eric Paddock said his brother had led an otherwise normal life.

"He liked to play video poker. He went on cruises. He sent his mother cookies," he said.

Paddock's neighbors in Mesquite, Nevada, 80 miles northeast of Las Vegas, were similarly dumbfounded to discover the killer lived in their midst.

"This is just a quiet, sleepy little community. It just blew me away," said Rod Sweningson.

"We've never even thought about locking our doors. We didn't know we lived two doors down from a lunatic."

The Las Vegas attack is the deadliest shooting in recent US history, surpassing the toll of 49 dead in an attack on a Florida nightclub in June 2016.

by Cyril Julien with Frankie Taggart in Mesquite/AFP