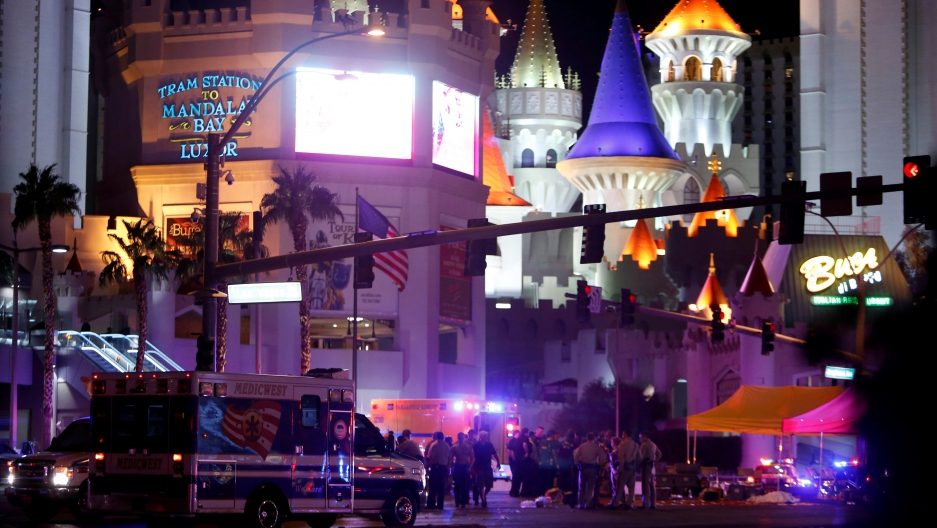 Las Vegas Metro Police and medical workers stage in the intersection of Tropicana Avenue and Las Vegas Boulevard South after a mass shooting at a music festival on the Las Vegas Strip in Las Vegas, Nevada, on Oct. 1, 2017.

A gunman killed 50 people and wounded hundreds more when he opened fire on a country music concert in Las Vegas in the deadliest mass shooting in modern US history.

Police said Monday the gunman, a Nevada resident identified as Stephen Paddock, had been found dead after a SWAT team responded to reports of multiple gunfire from the 32nd floor of the Mandalay Bay, a hotel-casino next to the concert venue.

"We believe the individual killed himself prior to our entry," Las Vegas Sheriff Joseph Lombardo told a news conference in the Nevada gambling hub.

At least eight rifles were recovered from the room that had been rented by the 64-year-old.

Concert-goers screamed and fled in panic as a steady stream of automatic gunfire rang out at the venue shortly after 10 p.m. local time, footage captured on smartphones showed.

Lombardo told reporters that initial estimates had put the number of dead "at in excess of 50 individuals" while more than 200 had been injured.

In a later statement, police put the number of dead at 50 and said the number of people taken to hospital at approximately 406, although it was not immediately clear if that figure included anyone who was later pronounced dead.

Police said Paddock, who lived in a town around 80 miles northeast of Las Vegas, had opened fire on the crowds below from the upper reaches of the giant hotel located on the famous Las Vegas Strip.

Paddock's female companion, who had earlier been named as a person of interest by police, is believed to have been located, Lombardo added.

Thousands of fans were attending the concert next to the Mandalay Bay as part of a three-day country music festival known as Route 91.

Donald Trump was briefed on the "horrific tragedy", the White House said, and the US president took to Twitter to offer his "warmest condolences and sympathies" to victims and families.

Pope Francis said he was "deeply saddened" by the "senseless tragedy," while Britain's Prime Minister Theresa May called it an "appalling attack."

Witnesses told how Paddock opened fire with an initial long burst, and then appeared to reload as he continued his spree.

"We heard (what) sounded like a glass breaking, so you looked around to see what's going on and then heard a pop, pop, pop," Monique Dekerf told CNN.

"You'd think for a moment okay we're fine, there's no more gunfire, then it starts again."

Best-selling country singer Jason Aldean was on stage and near the end of his concert when the shooting began.

Aldean initially carried on playing when the first crackle of gunfire could be heard but then hurried off the stage once he realized that it was a shooting.

Robert Hayes, a firefighter from Los Angeles who was watching the concert near the front of the stage, said he first thought the gunfire was some kind of equipment malfunction.

Once he realized what was going on, he joined the first responders, donning one of their vests.

"It was pretty much like a war scene inside."

The emergency crews used anything to hand as makeshift stretchers, including tables and metal railings normally used to control the crowds, said Hayes.

Asked if he thought it was an inexperienced gunman, he responded: "With 30,000 people in the arena area, it was kind of like shooting goldfish. ... He didn't have to be good."

Although the final toll has yet to be confirmed, it is already the deadliest shooting in the United States.

The previous deadliest shooting came in June 2016 when 49 people were killed at the Pulse nightclub in Orlando.

It was also the latest in a series of recent deadly attacks at concert venues.

Twenty-two people were killed while leaving an Ariana Grande concert in the northern English city of Manchester in May when a suicide bomber detonated a nail bomb in the foyer.

Ninety people were killed in November 2015 at the Bataclan venue in Paris during a concert by the US band the Eagles of Death Metal.

A shocked Aldean told his fans via Instagram that he and his band was safe.

"Tonight has been beyond horrific," the singer wrote.

"I still don't know what to say ... My Thoughts and prayers go out to everyone involved tonight.

"It hurts my heart that this would happen to anyone who was just coming out to enjoy what should have been a fun night."