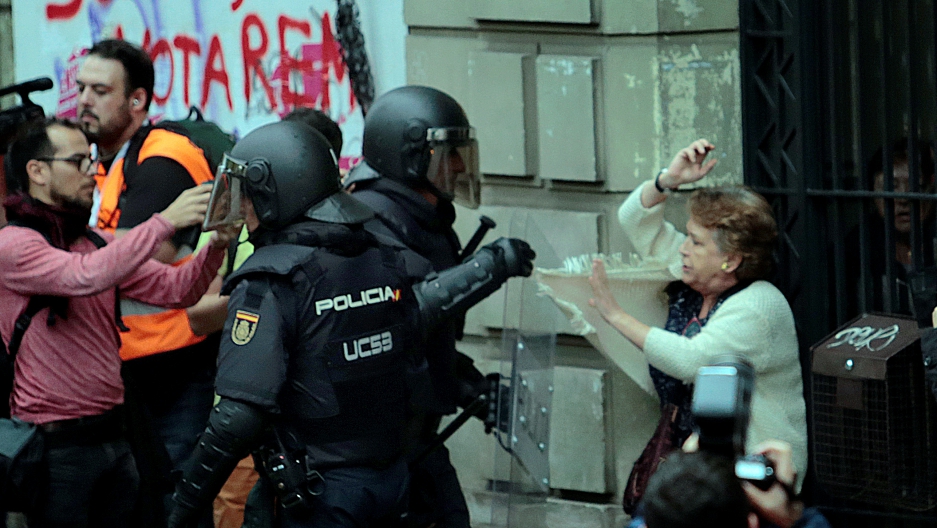 Riot police grab at a woman near a polling station for the banned independence referendum in Barcelona, Spain, on Oct. 1, 2017.

Spanish riot police fired rubber bullets and forced their way into activist-held polling stations in Catalonia on Sunday as thousands turned out to vote in an independence referendum banned by Madrid.

At least 91 people were confirmed injured in clashes out of more than 330 who went to hospital, emergency services said, as police cracked down on what the Spanish central government branded a "farce."

The violence further heightened tensions between Madrid and the authorities in Catalonia in the worst political crisis the country has witnessed in decades.

In the second such vote in three years, more than 5.3 million people were called on to have their say on independence from Spain in the wealthy northeastern region which has its own distinct language and culture.

The referendum poses the question: "Do you want Catalonia to become an independent state in the form of a republic?"

Catalonia has 3 official languages: Catalan, Spanish & (locally) Aranese, an Occitan variety. They all appear, in this order, on the ballot. pic.twitter.com/zieNxCM7Ed

But it has been ruled unconstitutional by the central government and the courts, with judicial officials ordering police to seize ballot papers, detain key organizers and shut down websites promoting the vote.

Deputy Prime Minister Soraya Saenz de Santamaria called on the Catalan government to call off what she dismissed as a "farce," as police fanned out across the region to block voting.

The Catalan government has "behaved in an absolutely irresponsible manner, it tried to annul law and justice in Catalonia, and with it democracy," she said.

In central Barcelona, riot police charged at demonstrators who were sitting on the ground blocking their way after they raided a polling station at a school, and fired rubber bullets, witnesses said. 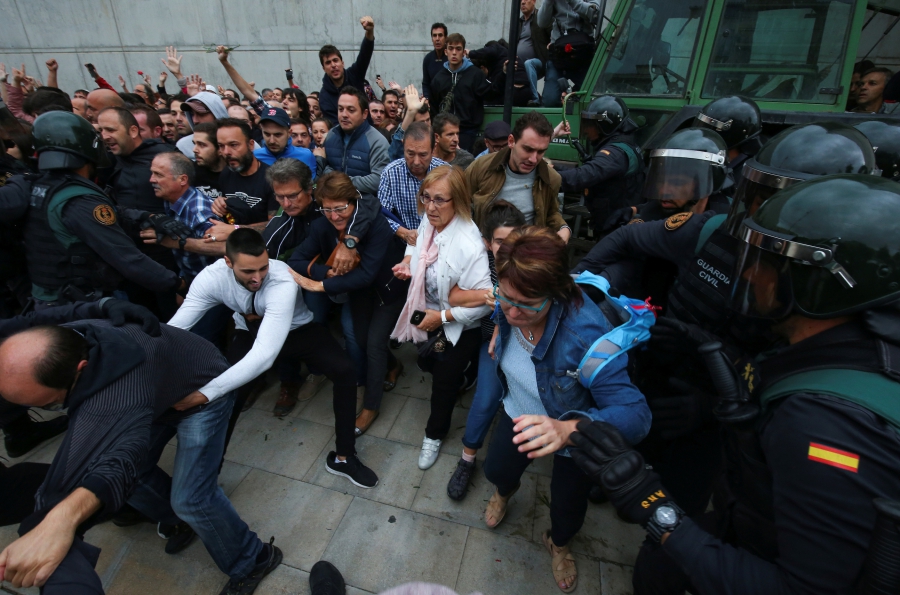 Spanish Civil Guard officers disperse people from the entrance of a polling station for the banned independence referendum in Sant Julià de Ramis, in Spain's northeastern region of Catalonia, on Oct. 1, 2017.
Credit:

The crackdown drew a sharp rebuke from Catalan leaders.

"The unjustified use of violence, which is both irrational and irresponsible, by the Spanish state will not stop the will of the Catalan people," Catalan President Carles Puigdemont said.

The police, he said, had used "batons, rubber bullets and indiscriminate force" against people demonstrating "peacefully."

"The head of a cowardly government has flooded our city with police," Barcelona Mayor Ada Colau wrote on Twitter, adding: "Barcelona city of peace, we are not afraid" — a slogan coined after August's jihadist rampage that killed 16 people.

Riot police also stormed a polling station near Girona, smashing the glass doors of the sports center where Puigdemont was due to vote and cutting a chain to force their way in.

But the regional government said Puigdemont had managed to vote anyway, tweeting pictures of him casting his ballot in nearby Cornella del Terri, and in several areas voting was reported to be peaceful.

"The sole objective of today’s operation has been to ensure that this illegal referendum does not take place and the Spanish and Catalan people can continue to live in peace and liberty as they have these past 40 years," Madrid's representative in Catalonia Enric Millo told reporters.

The trouble caused Barcelona soccer club to play its La Liga tie against Las Palmas behind closed doors after the Spanish league refused to postpone the match.

Sunday's drama unfolded after a night of tension in which thousands of people had gathered outside polling stations before dawn, joining those who had spent the night camped inside to ensure they would be open on the day.

Under a sea of umbrellas outside a school in Barcelona, a crowd gathered, among them elderly people in wheelchairs, families with buggies and parents clutching toddlers by the hand. With no police in sight, they were able to cast their ballots, prompting scenes of jubilation.

"That's the great hope, to be able to vote freely like this despite the problems we've faced, I'm very happy. I can die peacefully," added Jose Mas Ribas, 79.

Elsewhere in Barcelona, rows of police vans lined the streets, their blue lights flashing as officers in riot gear, some carrying heavy bolt cutters, walked past crowds outside another polling station.

"Votarem, votarem!" — Catalan for "We will vote!" — they chanted, many with their hands in the air. 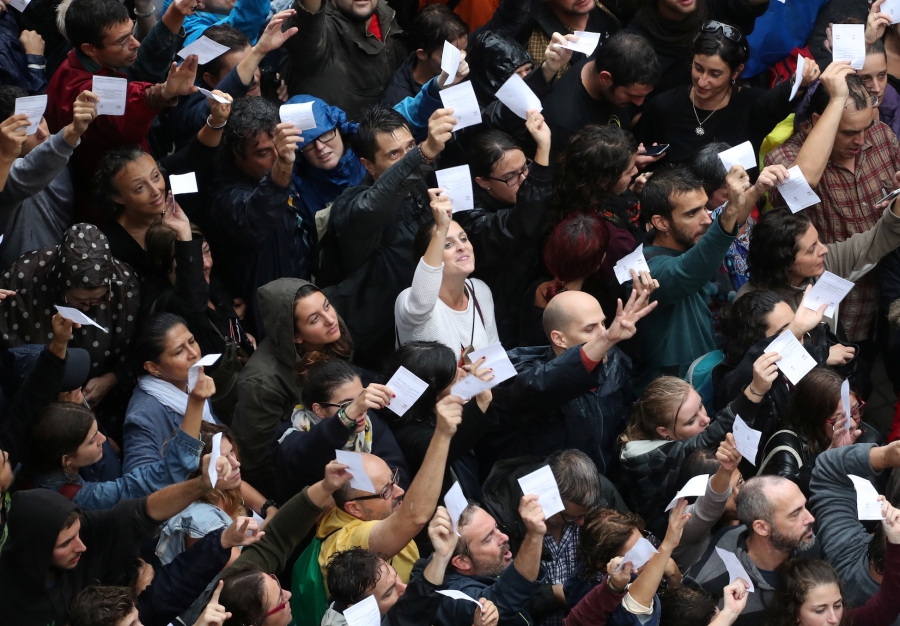 Voters hold up ballot sheets outside a polling station for the banned independence referendum in Barcelona, Spain, on Oct. 1, 2017.

Although Catalans are divided over independence, most want to vote on the matter in a legal and binding plebiscite.

Pro-separatist lawmakers in Catalonia have pushed for an independence referendum since September 2015 when they won a narrow majority in the region's parliament.

Although Catalonia already has significant control over education, healthcare and welfare, the region says it pays more in taxes than it receives from Madrid.

This has sparked resentment which has been further exacerbated by Spain's economic woes and helped push the secessionist cause.

The referendum law foresees a declaration of independence within 48 hours of a 'Yes' vote. But it remains unclear what the regional government will actually do so, although whatever happens, the outcome will not be recognized by Madrid.

The conservative government of Prime Minister Mariano Rajoy has come under fire for limiting its response to the crisis to repeating that the referendum is unconstitutional.

"The state needs to explain the benefits of remaining united, instead of repeating all the time that the referendum is illegal," said Rafael Castillo, a 59-year-old engineer at a Madrid rally, wearing a scarf with the Spanish flag around his neck.

By AFP's Marianne Barriaux in Barcelona; Daniel Silva in Madrid.