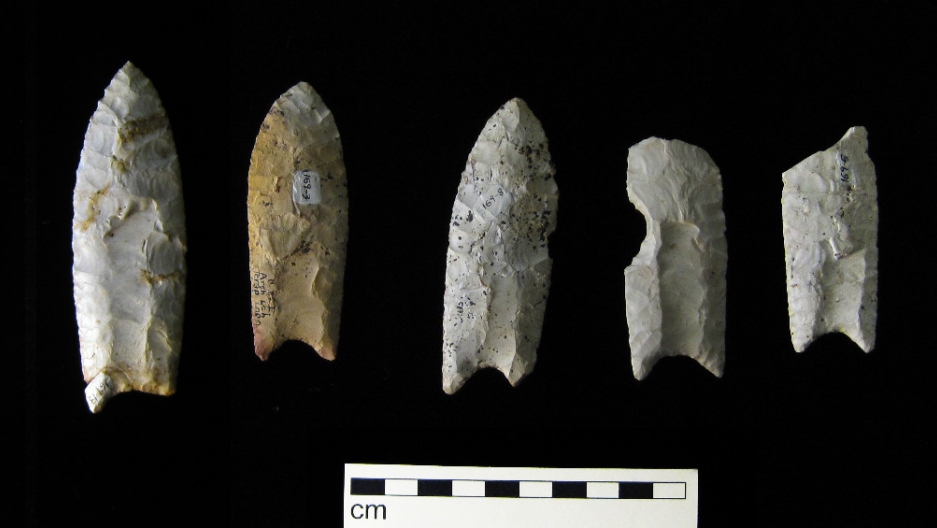 Clovis points from the Rummells-Maske site in Cedar County, Iowa, are shown here.

The Americas were one of the last areas of the world to be settled by modern humans, and we know that one of the first migrant groups, known as the Clovis people, lived here around 13,000 years ago.

Beyond that, however, many details about these early Americans are still hazy. “We know very little about their habitation structure or social structure," says Frédéric Sellet, an associate professor at the University of Kansas. “What we know is, we know what they ate. We know that they hunted mammoth, among other things, but also smaller animals. We know that they made beautiful stone tools.”

For Sellet, those stone tools are keys to understanding the Clovis and other early peoples. In particular, the Clovis left behind distinctly crafted stone spear tips, known as Clovis points.

At one Clovis site in Arizona — excavated in the 1950s — a mammoth was found with eight Clovis points, Sellet explains. “We think that that mammoth actually ran away and survived ... so, the Clovis hunters never caught up with him,” he adds. “So, we know that they were throwing spears into the mammoth and probably quite a few spears in order to kill it.”

To find Clovis tools, Sellet works with geologists to locate sediment layers from the period when the Clovis people lived. But even the help of science brings no guarantee of success. “Most sites that are that old are actually found by chance,” he says. “You have to understand that anything that is 13,000 years old is going to be buried very deeply.”

“For it to be found, it has to be unearthed by some heavy equipment, or we have to have a lot of erosion. In Kansas — in western Kansas — there is a lot of erosion; during the Dust Bowl, people found artifacts laying on the surface. But a lot of these have been picked up over the years, so they are getting very, very hard to find now.”

Jennifer Raff, an assistant professor at the University of Kansas, takes a different approach to understanding the Clovis and other early peoples. She’s a genetic anthropologist and studies DNA to learn more about human migration and ancestry. Right now, she says, scientists are working with a single Clovis genome.

“And that is because there’s really only one Clovis burial that we’re aware of, of a human individual,” she says, explaining that the individual, known as the Anzick child, is genetically similar to modern Native Americans.

“The Clovis peoples were the ancestors of all living Native Americans today,” Raff says. “If you look at the complete genome, we can actually detect genetic structure in Native American populations that tell us something about how they peopled the continent.”

The Clovis weren’t actually the first humans to settle in North America, Raff says. “It’s been really well-established archaeologically and genetically that there were people here prior to the Clovis culture. But they, too, were the ancestors of indigenous Native Americans, so we see very irrefutable evidence that all Native Americans are descended from the earliest indigenous peoples of the Americas.”

Rather than racing across the Bering land bridge, Raff says, these earliest people likely stayed in Beringia for thousands of years. “And they lived there until the pathways opened up — probably first along the West Coast — and then traveled down the West Coast as far as South America quite rapidly, and then peopled the continents across the land.”

To Raff, the ability to recover complete genomes from early remains has revolutionized our understanding of ancient peoples. “I think that one of the major things that we have learned from these new types of evidence has been that you can’t assume anything about human history,” she says.

While artifacts can signal how a culture was shared between populations, she explains, they don’t necessarily mean that people were moving around themselves.

“We see examples of contact between different cultures through the exchange of artifacts and material goods without there actually being any kind of biological consequence to that,” she explains.

“And then we also see the opposite in the genetic record,” she adds. “We see complete population replacements happening with very little archaeological evidence of that. So, you just can’t make assumptions about human history and about human biological history without really going out and looking at the DNA itself.”

This article is based on an interview from Science Friday‘s recent live show at the Orpheum Theater in Wichita, Kansas.