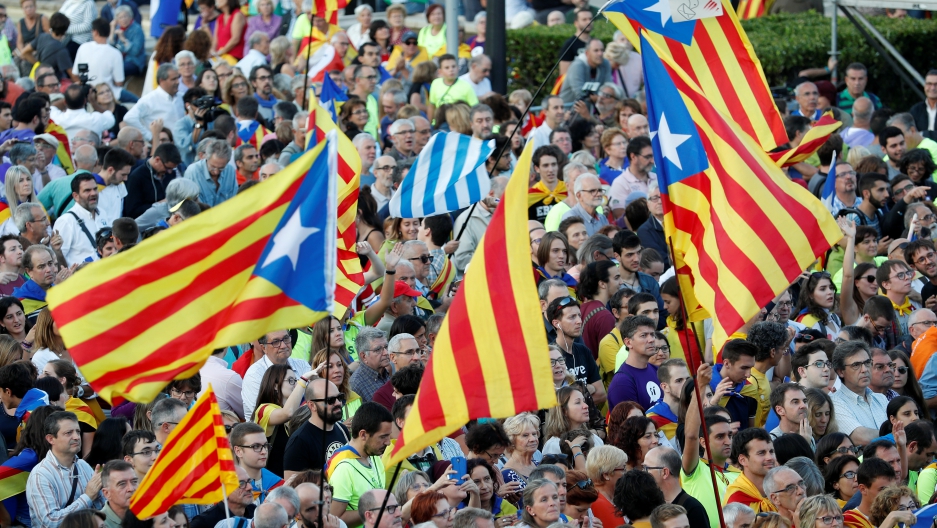 People hold Esteladas (Catalan separatist flags) as they wait for a closing rally in favor of the banned Oct. 1 independence referendum in Barcelona, Spain.

There are just two days left until an independence referendum in Catalonia. The central government in Madrid has vowed to stop the vote, which it says is a violation of the constitution.

But Catalans seem more determined than ever to proceed with the vote, according to Gerry Hadden, a reporter in Barcelona.

“Today, the [Catalan] leadership unveiled a new prototype for their ballot boxes to replace the ones that were confiscated,” Hadden says. “They were bought apparently for $6 a pop on Alibaba from China.”

Pro-independence parent-teacher associations have also joined the fray. “They’re organizing region-wide pajama parties for [Friday] and Saturday night in the schools to be used for voting,” reports Hadden. “Their thinking is, ‘If we’re already inside come Sunday sunrise, then it will be that much harder for the police to kick us out.’”

Polls show Catalonia's roughly 7.5 million residents are split on the issue of independence, but a large majority want to vote in a legitimate referendum to settle the matter.

You can hear more from Gerry Hadden on the lead-up to the vote by clicking on the audio link above.

Material from Agence France-Presse was used in this report.