Award-winning librarian Nancy Pearl says we shouldn't be afraid to be challenged by words.

Here's a rallying cry for proponents of free speech during #BannedBooksWeek.

"Words are dangerous," says Seattle's most famous librarian, award-winning author Nancy Pearl. “There are always going to be people and always have been people who feel that other people, not them, but other people need to be protected from encountering those words.”

Protected from what, exactly? Imagine not being able to read Dr. Seuss or Maurice Sendak, or buy a copy of "Ulysses" by James Joyce or "Tropic of Cancer" by Henry Miller — both books had to be smuggled into the US in the 1930s. Both titles caused outrage because of swearing, references to nudity and sexual scenes that, in today's world, wouldn't cause readers to bat an eye. But today, some books are challenged by library patrons and authors have been uninvited from schools because someone found a work offensive. 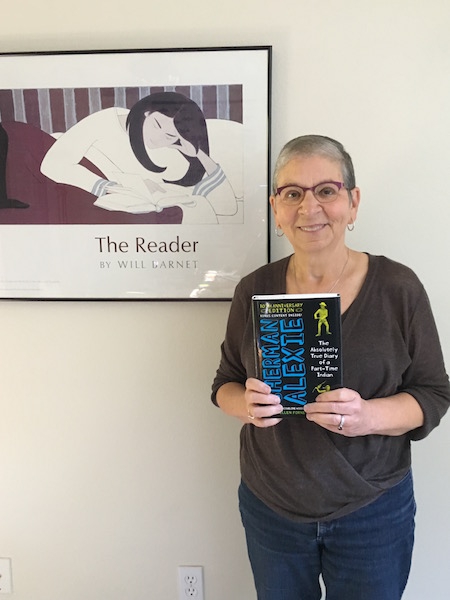 Seattle librarian Nancy Pearl holding a copy of one of the books most challenged by parents: "Absolutely True Diary of a Part-Time Indian" by Sherman Alexie.

Pearl says part of the obsession with reading is because its unique — you're reading a version of the book nobody else will read.

"You bring to the reading of a book all of who you are," says Pearl. "Because no two people are identical with identical backstories and identical feelings and in an identical mood at this particular moment, everybody reads different books differently. ... So some things that you find offensive or that you don't want to think about — you are bothered by that in a book. And because you're bothered by it, many people feel as though nobody else should be able to access that information."

Rainbow Rowell, author of the young adult book "Eleanor and Park," found herself at the center of controversy when parents challenged the book, labeling it "vile profanity." She was asked not to come to schools in a suburban Minnesota district after the conservative group Parent Action League and some parents called for school librarians to be disciplined for choosing the book.

Rowell's book is about a first love and deals with topics like racism and bullying.

Each year, the American Library Association records hundreds of attempts to get books removed from library shelves. Pearl says books can be banned by school libraries if enough parents object. Books often challenged include "Catcher in the Rye" by J.D. Salinger, "Lady Chatterley's Lover" by D.H. Lawrence, "Lolita" by Vladimir Nabokov and "Native Son" by Richard Wright. All of those books upset the status quo. And that's what books being challenged today often do.

Pearl remembers a T-shirt she saw awhile back that read, "If you don't like a book in my library, that's what makes it a library." And she agrees. "The point of a library is to represent everything, all ranges of the human condition. And in fact you know, that gets many people riled up, particularly in this political climate."

Pearl says there have been times where she's come across a book she doesn't agree with or finds offensive. This is a time where she says she has to give herself a "stern talking to."

Books promoting Holocaust denial have come to Pearl's library. She puts them on the shelf, regardless of her opinion.

"It wouldn't be a library if there weren't books that annoyed people."

Ultimately, she says, reading makes people more compassionate. "It makes us get outside ourselves." Something she feels people need to do more and more in today's political and cultural climate.

Nancy Pearl regularly speaks about the importance of libraries and reading. You can hear her on Nationa Public Radio on KUOW in Seattle and KWGS in Tulsa, Oklahoma. In 2011, she won the Librarian of the Year Award. Pearl is a best-selling author and has written numerous books.

Read more of our stories about banned and challenged books here:

Banned Books Week celebrates the books that are 'filthy, but great' — and more

Step inside a Los Angeles bookstore that takes on Iran's censors