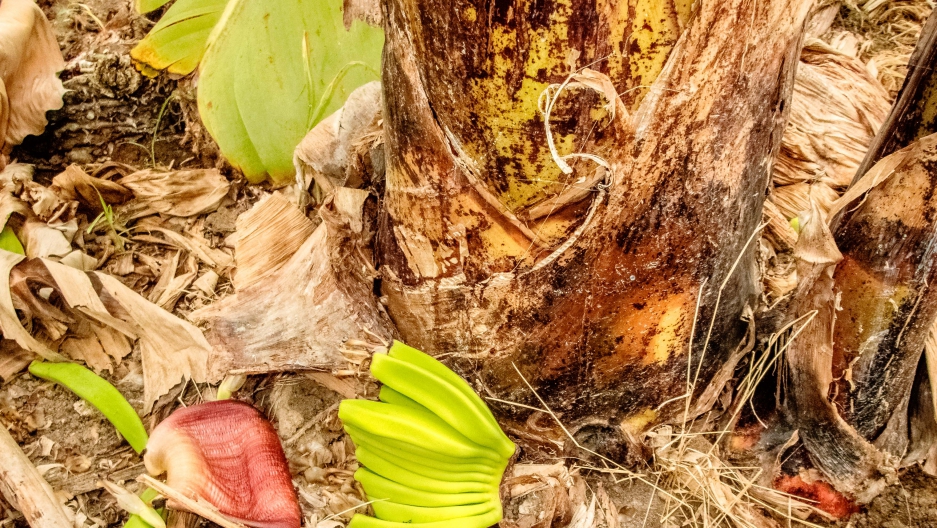 Organic banana trees are not producing bananas fit for export due to extreme weather changes in Piura, Peru.

The nest of the Chilalo bird is sophisticated — nothing like the simple twig constructions of other birds. It’s completely enclosed, has divisions inside akin to rooms, and for farmers in northern Peru, the location of this nest predicts upcoming weather.

In fact, farm manager José Luis Vildoso Garcia says that late last year, when he noticed that the Chilalo nests moved from outer branches into the interior of his banana trees, he knew the rains were coming.

And that was a marvelous feeling after enduring almost a year of drought, the likes of which his Peruvian town of Piura had not seen in decades. The 2016 drought in Piura did serious damage to the organic banana plantation he runs. 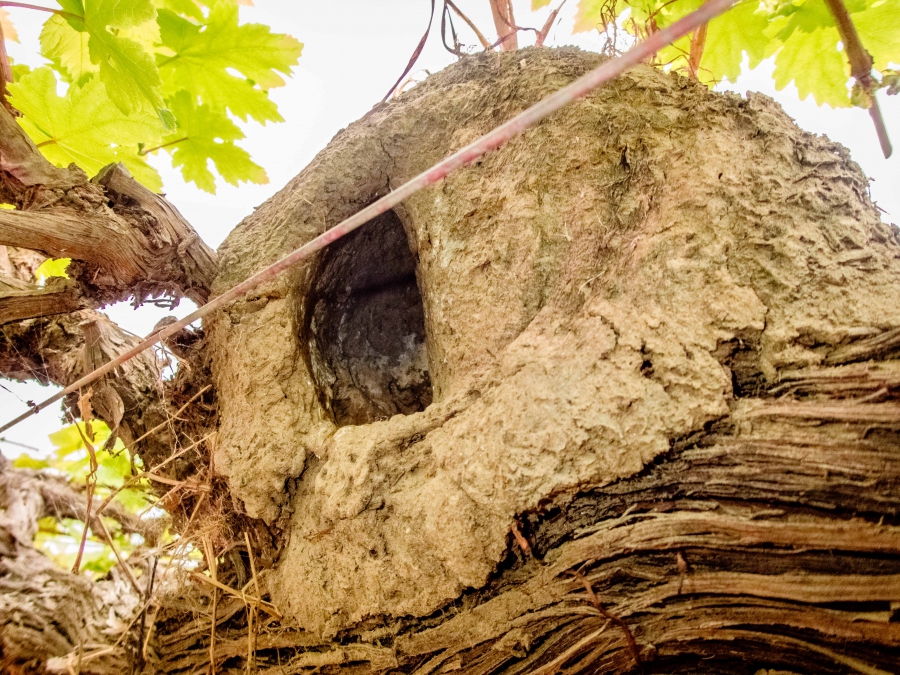 A Chilalo nest sits on a branch of an organic banana tree at the Agronoperu Sac plantation in Piura, Peru. Locals say the location of these nests can be an indicator of upcoming weather.

As one rainless month turned into another, farmers like Garcia were losing crops, losing income and losing hope.

So, when the Chilalo nests began to appear closer to the tree trunks, Garcia perked up.

“Older villagers who have lived in this area for more than 70 years say that when the Chilalo starts to build a new nest, more protected and close to the trunk, that’s because rains are coming,” he said.

And the rains did indeed come. But they were not the normal temperate rains the region is accustomed to. These were torrential downpours, every day, for months. It was back-to-back extreme weather events for this agricultural region of Peru. And for Garcia, the very viability of his farm, which exports organic bananas to the United States, Europe and Asia is now in question.

It’s a crisp, July morning when I arrive at Garcia’s farm. After scrubbing my hands and arms, and having my shoes cleaned off to protect from nonorganic organisms entering the farm, Garcia walks me through the vast fields of banana trees. The Chilalos are singing and bees are buzzing — a good sign, according to Garcia — but there is not much fruit on his trees.

“This is an example of a tree affected by drought and rain,” Garcia said as he holds up a bunch of bananas — they’re tiny, deformed.

Garcia uses the metaphor of a family to explain the way banana trees cluster together. A banana tree will grow little shoots that will turn into banana-producing plants, too. It’s this process that makes a banana plantation productive — when the main tree has fruited, the smaller offshoots will fruit next, Garcia explained. But Piura’s extreme weather first affected the main trees when it didn’t rain for eight months.

“So, after the 'mama' died in the drought, the "child" that she sprouted began to drown because of the excessive rains.” 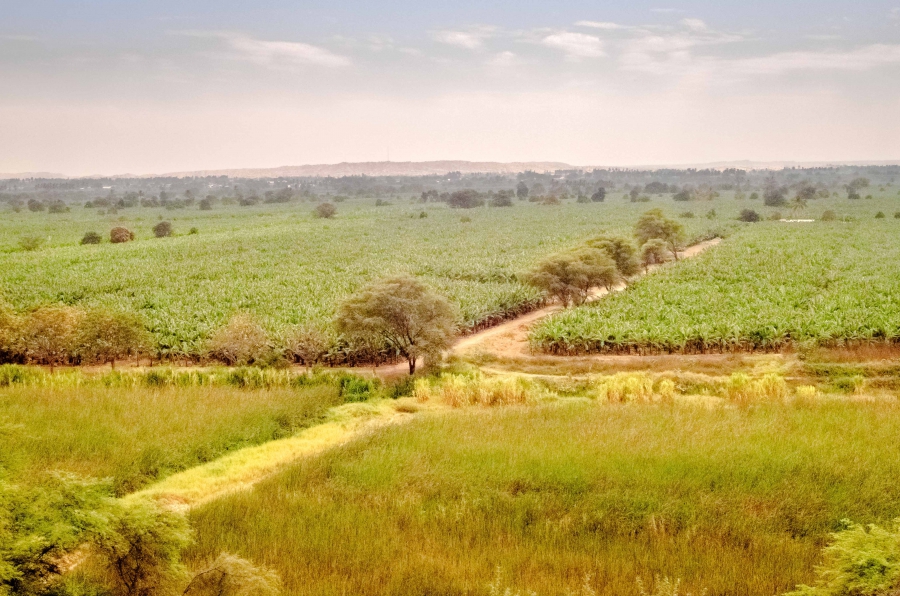 Garcia said he lost 50 percent of his crop to the weather. But the extreme weather didn’t just affect his banana yield. It also stalled transport options along the export route for the bananas that did manage to survive and grow.

“Last week, we had 25 containers that could not be exported to the US, and everything in them will be incinerated because they closed the port.”

The ocean was too rough, unsafe for ferrying out the containers of produce to the export ships.

The organic bananas from this farm are bought by Dole Food Company and then shipped worldwide, including to the US.

With such a drop in organic bananas from Piura, might this mean that consumers in the United States will get less, or pay more for what does arrive?

Xavier Roussel, vice president of marketing and sustainability at Dole, said production hitches — like bad weather — that can diminish what it usually buys from one farm or region, are compensated for in other areas.

“There are many different ways to mitigate these kinds of losses because we source organic bananas from a wide variety of sources,” he said. “So, if Peru has torrential rains that have affected the production down there, we would compensate by taking more fruit from the other sources, namely Ecuador or Colombia.”

US organic banana consumers won’t be left without, he said. 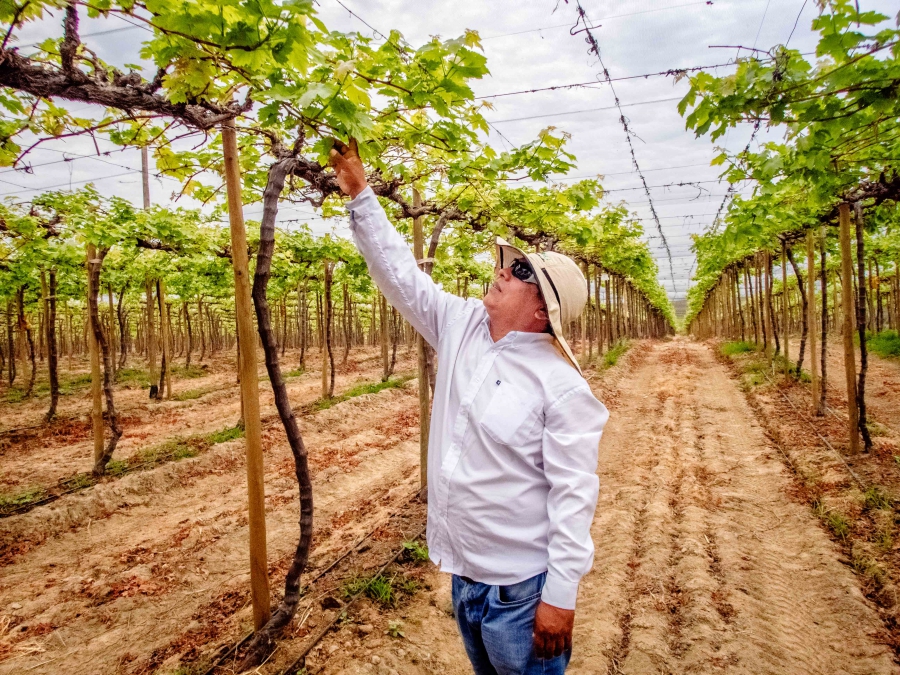 Yet that doesn’t help Peru’s farmers. Piura’s economy has been deeply affected by the loss in agriculture exports, according to Eduardo Pineda Guerra, Piura’s regional director for economic development.

"Here in Piura, in a normal year, our produce contributes to the gross domestic product by about 5 percent, but this year, we’ve only managed 2.5 percent. So this has really affected us, it’s hit us very hard,” he said.

It’s not just organic bananas that have been decimated by Piura’s extreme weather. Limes, mangoes and grape production are also down.

As you drive inland from the Piura coast, vast plantations blanket the land. At the Agroexportaciones Nor Perú S.A.C. grape farm, manager César Chávez shows me around. The grapevines are planted in a mesmerizingly symmetrical pattern. The beauty of the crisscrossing plants masks the fact that most are barren. Chávez finally finds a “normal” fruiting vine. But there are so few this year, he said.

“Each plant will usually give us between 80 to 100 bunches of grapes. But this year because of the weather events, we’re not even getting 10 bunches per plant.”

He said he has never before experienced such extreme swings in the weather.

“You can’t prevent this kind of loss on a farm when you’re facing unknown weather events,” Chávez said. “We just don’t know how much it will rain, and here we had 12 hours, 16 hours of rain a day. Way too much water to do anything about.”

It’s a long road ahead for Piura’s farmers to recover their crops. Everyone is hoping the weather bounces back to what it’s always been, but after almost two years of ferocious changes, farmers fear this might be the new normal — that the extreme weather associated with climate change has come to stay in their corner of the world.