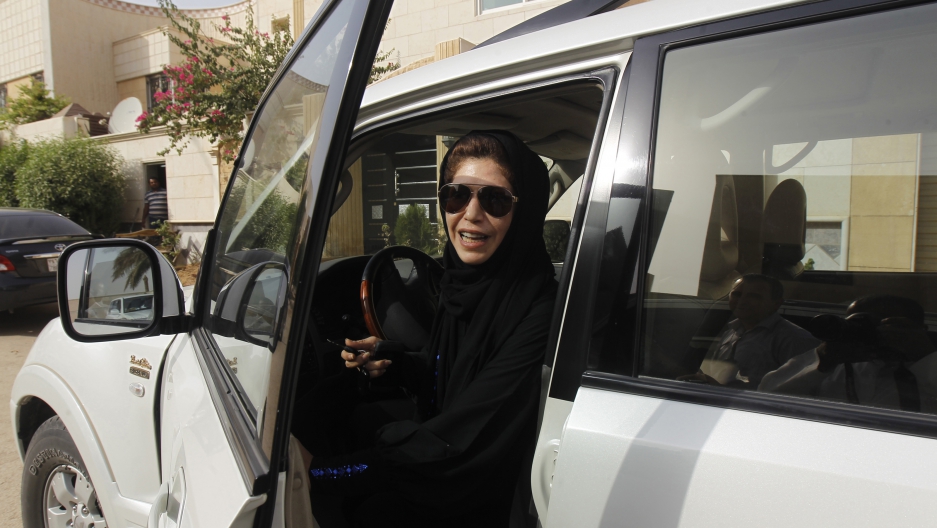 Female driver Azza al-Shmasani alights from her car after driving in defiance of the ban in Riyadh on June 22, 2011.

When the Kingdom of Saudi Arabia issued a decree on Tuesday allowing women to drive, many were left scratching their heads.

"I was in shock,” says Nadia Malaika, who lives in Jeddah. “I thought maybe it would happen in 10 or 15 years but not now.”

Malaika says she's lucky to be able to afford a personal driver. And in fact, she prefers it that way.

"I find driving a hassle," she explains. "The streets are crowded; [...] I love the fact that I can just go up to the store, get dropped off at the door and then have the driver worry about parking. I take a nap after work in the car on the way back home. So, for me, it's [a] relaxing time."

But she knows that many women in her country are not as lucky as she is. And that denying them the right to drive complicates their lives.

"I think women should have the choice to decide whether they want to drive or not," Malaika says.

The driving ban was the primary reason Layla Hariry could not imagine returning to live in Jeddah — the city she grew up in and loves. Hariry, who lives in the US, was born to an American mother and a Saudi father. She remembers visiting Jeddah last fall and one day waking up to find she was out of milk.

"The keys were sitting right there, on the table," she recalls and yet, the driving ban meant she couldn't hop in the car and get milk from the grocery store around the corner.

"It'd be this elaborate coordination of calling multiple people, trying to find the driver," she explains. "'No, the driver is asleep,' "Driver went off to pray," 'We can't find him' and then just hours just to move short distances."

The "suffocating weight" of being unable to get in a car and control your mobility, she says, was why she could not imagine returning.

And Hariry isn't the only one to feel frustrated by this.

In fact, Saudi women have been fighting the ban since the 1990s, and many of them have faced harsh consequences.

One of them, Lujain Al-Hathloul, made a video of herself while driving on the highway that connects Saudi Arabia and Dubai. Ever since the video appeared online, she has been the target of harassment. She was arrested and her passport was taken away.

Layla Hariri, the Saudi American novelist, thinks there are economic reasons behind why the Saudi leadership decided to allow women to drive. With oil prices fluctuating, the Saudis are looking to shake up their economy.

Hariri says drivers in the kingdom often come from places like the Philippines or Bangladesh. And they send a part of their salaries to families back home. This is money that Saudi Arabia loses.

"So, if you have [an income of] 1,500 rials, instead of 5,000 going to a driver who immediately wires it all to [the] Philippines, you can have that [money] spent within the country instead," she says.

The Saudi government has also been talking about including more women in the workforce by 2030, and the driving ban was a major hurdle in achieving this goal.

Nadia Malaika says even though the ban will not end until next June, her friends are already talking about what cars they plan to buy.

"I'm hearing Mercedes, Bentleys, so very expensive cars, so you can tell what kind of friends I have," she says with a laugh.

Malaika and Hariri don't see this as an end to the struggle for human rights in Saudi Arabia.

On the contrary, they think this is the start.

"It's not specifically the driving that I'm excited about," says Malaika. "I'm excited about the possibilities of what's going to come after this. Because this is a huge step for the country that has been fighting this for a very long time."

And as for her driver, she'll keep him. Because that afternoon nap is, oh, so hard to give up.